ICW Get To Tha Choppa Review By Calvin Berry 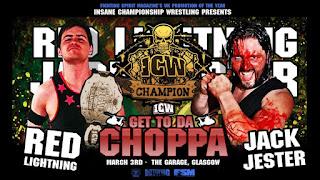 New Tag Team champions were crowned as Insane Championship Wrestling returned to the Garage in Glasgow for ICW: Get To Da Choppa.

After their debut in Edinburgh a few weeks ago with ICW: Tramspotting, ICW returned to the Glasgow with a stacked show from top to bottom in front of a sold out crowd.

Before the show could start ICW owner Mark Dallas came out to address the crowd and announced that Fear and Loathing VI, ICW’s biggest show of the year will take place at the O2 ABC just up the road from the Garage.

ICW’s announce team Billy Kirkwood and Sean David were out next to start the show however they were interrupted by Chris Renfrew who did not want to wait about and wanted to face rival and former best friend BT Gunn straight away.

BT Gunn came down to the ring however a match never started as the two took out any referee who tried to enter the ring as mayhem broke out.

After a brawl Chris Renfrew picked up BT’s scissors and tried to stab BT with the scissors like he had done to him a few weeks ago at Tramspotting but security stopped him and the match ended as a no contest.
The in ring action finally got underway as two of the best tag teams in Britain faced off as Fight Club took on Project Ego.

This was a very good tag team match as both teams put on a show for the fans with a mixture of great action and comedy including a ‘double teabagging.’

Fight Club finally picked up the win after Kid Fite and Liam Thomson hit a nasty looking powerbomb/backstabber combo. After the match Fight Club tried to shake hands with Project Ego but Martin Kirby and Kris Travis left the ring sticking up their fingers up at Fight Club which will hopefully lead to a rematch down the line.

‘The Mexican Sensation’ El Ligero made his return to ICW next as he took on Mark Coffey of the Save Pro Wrestling Movement.

This was the first time Ligero had been in an ICW ring since ICW: Dazed and back in 2010 but even with the crowd behind him, El Ligero could not pick up the win as Mark Coffey made him tap in a Boston Crab.

After the match the newest member of the Save Pro Wrestling Movement Nikki Storm ran out and teamed up with Mark to beat down Ligero until Leah Owens ran out to make the save and help Ligero clear the ring.
Jimmy Havoc was in action next as he faced off against James Scott.

Before the match began James Scott refused to enter the ring until Havoc got rid of the bin he had brought to the ring. Once the weapon had been thrown out of the ring,these two put on a very good technical match with Havoc proving that he is a good technical wrestler as well as hardcore wrestler.

Scott ended up using the bin to the victory which did not go down well with Havoc who challenged Scott to a No Disqualification match next month at ICW: Get Your Rat Oot.

It was time for the first half main event as the Bucky Boys challenged S.T.I for the ICW Tag Team Titles in a ladder match.

These two teams have been battling on and off for nearly three years in ICW and this was a fantastic match with many memorable spots including Stevie Boy hitting an incredible Canadian Destroyer on Dickie Divers off the top rope!

Stevie Boy then took out Grange with a Coast to Coast with a ladder and both Bucky Boys then climbed the ladder to grab the belts and become the new champions as the crowd went crazy.

After the match Dickie Divers showed respect to the Bucky Boys,  clearing the air and asking for a rematch which they accepted, however as they left William Grange turned on Divers and left him down with the help of Sara. Grange then grabbed the mic and says it is time for him to his push for the ICW Title and Divers is nothing without him.

There was some chaos during the break as Chris Renfrew and BT Gunn brawled through the crowd with the security struggling to split them up.

The show resumed with another edition of the Polo Lounge hosted by Jacie Polo with Rob McKai and Mark Sweeney as the guests.

Jackie Polo tried to conduct an interview with both guys however the two did not stay civil for long and a brawl broke out with a ring full of security having to split them up as Polo left in a mood.

It was time for some music as the ‘Teen Sensation’ Christopher, accompanied by his agent James R Kennedy was out to debut his new single for the ICW crowd but before he could sing the familiar music of Like a Prayer hit as Grado made his way to the ring.

Grado came down to stop Christopher from singing but he too was interrupted by Jamie Feerick who with Christopher attached Grado until the new Zero-G champion Wolfgang ran down to help and an impromptu tag team match was set up.

After a fun comedy match which included Wolfgang throwing Feerick into one of the bars! Back in the ring Wolfgang hit a senton bomb on Jamie Feerick and Grado pinned for the victory.

The 2013 Square Go winner Mikey Whiplash was in action next as he took on Noam Dar.

This turned out to be a decent comedy match however I was disappointed as I was looking forward to seeing two of the best in the UK face off in a technical match.

Whiplash was set to win but Kay Lee Ray interfered, allowing Noam Dar to roll him up for the shock victory.

It was main event time as Red Lightning put the ICW Heavyweight title on the line against Jack Jester.

This match turned into a brawl quickly as the two battled through the crowd and the Save Pro Wrestling Movement tried to interfere to help Red but they were chased away by an angry Wolfgang.

Jester looked certain to win the title however his rival Mikey Whiplash interfered and took him out with the ICW title belt, allowing Red to cover to retain the championship.

After the match Whiplash tried to cash in his shot at the title but the Save Pro Wrestling Movement attacked and held Whiplash down as the champion Red grabbed a mic and told him “you can’t cash in if you can’t get near the champ” as the show ended with the Movement running wild.

Get To Da Choppa was a packed show full of great action and memorable moments including a fantastic tag team titles ladder match.

With a great start to 2013 and the announcement that Fear and Loathing VI will take place at the O2 ABC, it looks like it is going to be another successful year for ICW.