The Story Of Loco Imbecile (Una Parte) By Robert Shade 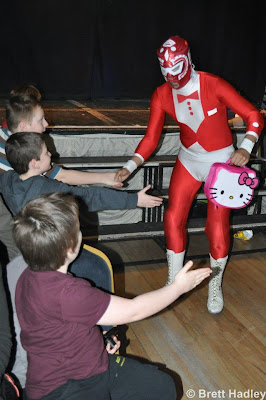 In August of 2011 a man was found staggering around the region of Estado de Guerrero in a dusty town named Los Sauces, which is a small place with an estimated population of 3295 people, this man appeared to be dazed and he was being openly mocked by a gathering crowd as people were using spray paint to colour his naked skin a bright red and another person was trying to put the traditional Mexican wrestling mask on his face as the man was trying to get to his feet but continued to fall over giving the impression of being intoxicated even though that was not the case.

He began to try and run from the pursuing crowd wondering why they were chanting ‘Imbecile’ at him as he fell and slipped and crawled away from them, as he slowly kind of fell and slipped past a nearby house the owner of the house leapt out and dragged him into the sanctuary of his home and sat the poor man down and offered him solace.

Later as the man came around more he realised that the house owner’s wife was gently washing the spray paint off his skin and was instead wrapping a thin cotton sheet around him which appeared to have pictures of cats on.

He tried to stand up to say Hola, Como estas (Hello, how are you) to the lady but unfortunately got his feet all tangled up in this pictured cat covered sheet and tripped over, he then tried again to get to his feet but this time tripped over the bucket of water which the lady had been using to clean the paint off his reddened body and as he fell the bucket flew threw the air and landed on a small box which had been rested on the edge of a table, the box flew off the table landing on the floor and lots of chocolate looking biscuits fell out.

Que es esto? (What is this?) exclaimed the man and I am so so sorry Senora I am such an Imbecile for my clumsiness I do not know why I am like this, the lady calmly reassured him and explained that she had recently been on a trip to the UK and had returned with a new biscuit she had found on her trip called Jaffa Cakes although she is very confused as those eeenglish people call them cakes so they do not pay tax but never mind that!

She offered the man a Jaffa Cake which he devoured very very quickly, she said help yourself I have many boxes, the man who was for some reason very very hungry duly obliged, after he had ate a few packets he tried to move away from the table to sit back down in his original chair but as he did so he had totally forgotten that the cat covered sheet remained around him and again went absolutely flying in the process.

He said to the lady why do you have sheet covered in cats this is craaazy, she replied that again the sheet and others were from the UK trip and were from the Hello Kitty craze sweeping the UK which she had brought for her granddaughter but was yet to see her to pass them on, they are crazy to say Hola to gatos (cats) in the UK thought the man to himself and I thought I was an Imbecile those idiotic fools!

The owner and his wife offered the man refuge for a few nights whilst he tried to remember who he was or where he was going, they said that the only spare bed they had available for him was in the loft where their son used to live before he moved out and it was easily accessible by the loft ladder, the man thanked them for their kindness and went to climb the ladder to look at the bed.

When the man reached the ladder and put a foot on for some reason he found that his body was suddenly trembling, he had absolutely no idea why, he moved up a rung, then moved his right foot up to go up another then wow he fell! He had no idea why but he knew that he was shaking like a leaf, he tried again the same result but now he was close to tears, he was absolutely petrified of going up that simple ladder but had no idea why, gawsh he thought I truly am an Imbecile.

He told the couple and they kindly allowed him to sleep on the sofa in the main room, an advantage of that was that he could watch lots of television and keep working on the couple’s store of Jaffa Cakes! He found Mexican Wrestling on the TV in fact it was AAA Wrestling one of Mexico’s bigger promotions, he absolutely loved watching Jack Evans and the masked Extreme Tiger but he did find it very rude that the untalented Jeff Jarrett would sometime ride in and take a title but hey whatever!

After the man had been in this house for some weeks the kind couple tried to help him find his true identity, they brought in the local policia to talk to him to see if using their expertise they could help him remember who he was and what he did for a living, the man panicked, he could not remember anything about himself so when pressured he fell back on the only thing he could ever remember being called and that was Imbecile.

Ok Mr Imbecile said the helpful police officer what is your first name, again all he could think was what describes an Imbecile so he said ‘Loco’, ok then Mr Loco Imbecile what do you do for a living, again Loco thought and again he could only think of the one thing which he had really seen in himself since living in the house and that was wrestling, I am a Luchador sir he said that is what I am.

Loco has been taken to the nearest sizeable city in the same region of Guerrero which was a city called Acapulco with a population of 790,000, he missed the kind couple but loved the big city and the colourful lights and the noise although he could not get a grip with the elevators in the large buildings always getting that trembling feeling when going near them.

He had trained in a local wrestling school which meant he had now been able to fall over both feet at once as opposed to just one at a time, must be dodgy he thought, the name of the school was ‘Casa Del Dolor’ which did seem to turn out some real talent but did not appear to be doing much for Loco, he was often distracted by a loudmouth stood by the side of the ring who he did not care for much but he was always there and Loco blamed this man ‘Javier Valle’ for his moves always failing so he thought if I can get away from here and wrestle somewhere else I can be much better and not fall over so much.

He thought of the UK as he wanted some more Jaffa Cakes having had none at all since leaving the couple’s house, hell he may even get something to do with those crazy cats people Hello Kitty and he had been on the internet failing to find his roots as he could not remember anything but he researched wrestling in the UK and had subscribed to some tweeters and in particular @southsideWE kept on coming up, he liked that as he had read show reviews through a translation page tweeted by @shadetheshoot & @WLHSTU and he wanted some of that so he thought to himself I shall get on a plane and be part of @southsideWE!

To find out how on earth Loco Imbecile managed to get onto a plane in one piece and then succeeded in getting a job in Southside Wrestling, also why he carries a lunchbox to the ring, why he fires party poppers,why he wears his red costume and why is he so scared of heights please watch this space all shall be revealed......
Posted by WrestleFigsUK at 15:05