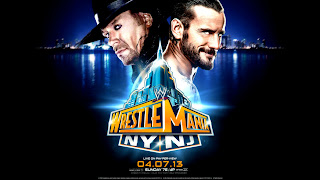 Wrestling's biggest show of the year is a mere two weeks away and while I would like to be able to say that my interest in Wrestlemania XXIX is growing by the day, I honestly was more excited about the show months ago.

What I'll be doing in this blog is looking at the build for each match and suggesting booking ideas that I feel would be more compelling to the buying/viewing public and as you'll see most of them are pretty straight forward. Also I'll be making my predictions for the big show, these will be based on who I think will win rather than who I would choose to go over.

Well last year's tagline of 'Once In A Lifetime' really meant something didn't it? Though seriously this is the biggest money match the WWE currently as on the books. There is a natural story to tell here of John Cena's redemption after losing at last years event and if it was done correctly it would be a very compelling narrative.

The problem is that we have hardly had any kind of build so far, they have had one in-ring confrontation which was absolutely fine and they have followed it up with a nice video package highlighting that confrontation and John looking sad after losing at Mania XXVIII which they have now shown us two weeks running.

Last week on Raw, Cena was goofing about in the opening segment with the Prime Time Players of all things. Wouldn't want to give the impression that your really bothered about your title match on 07/04 would you? The Rock makes his Raw return on the 25/03 episode and hopefully we'll see something pretty great because for a Wrestlemania main event we need more than one confrontation and a video package.

This could have been really intriguing had the WWE basically not gone out of its way to tell you who is going to win here. As I've said before Lesnar has something about him that nobody else on the roster does, that being a genuine air that something dangerous could happen at any point. If you compare him to Mark Henry & Big Show, who have recently being booked as the 'WWE big dominate monsters' there is no comparison. You don't ever think they are going to injure their opponents. Lesnar always looks on the verge of inflicting a major beating on whoever is unfortunate enough to stand in his way.

The fact that he's recently signed a 2 year contract indicates that he really should win here. However let's not forget that in storyline that Triple H has had his arm broke twice, seen his best friend also have his arm broken (Shawn Michaels), seen his father-in-law brutally attacked and finally he needs to get revenge for losing at Summerslam. In short there is no chance that Triple H is losing here, and while the build up as worked especially the great work by Paul Heyman. I think the 'Loser gets Stephanie' stipulation was a great line it doesn't detract from the frustration of knowing what's going to happen.

The Undertaker vs. CM Punk

Again the most simple story could have been told. Punk after losing to The Rock at Elimination Chamber should have ranted and raved and then declared as 'Best In The World' he will do something that as never been done. He will demand to face the Undertaker at Mania and he will end the streak to prove categorically that he is indeed the best. You can then have the Undertaker doing his basic 'Be Careful What You Wish For' promo with the added bonus of Paul Heyman freaking out.

Instead we have Punk winning a pointless four way to 'earn' the right to face Undertaker, and then we have some pretty goofy stuff of stealing the urn in which we are supposed to believe now contains the ashes of Paul Bearer. They could have gone the route in treating this as a serious match instead it's been turned into something like a cartoon. Don't be in the least bit surprised if old footage of Paul Bearer appears on the video wall to inspire the Undertaker to victory.

On TV it appears that the Jack Swagger & Zeb Colter (based on right wing hack Anne Coulter, for you trivia fans) don't seem to be getting over although they are having more luck on the house shows. They though aren't really the problem, Del Rio is just not clicking as a babyface the fans can get behind.

He wasn't helped by being given the worst turn in wrestling history when he was booked to run over Santa Claus and didn't care. Wrestling fans do not expect their heroes to be acting in such a manner, his interviews are also really bad and in 2013 you really shouldn't be doing pandering interviews. The WWE want him to be a big Mexican star, but his interviews put over the USA more than Mexico. And should we really be watching a wrestling feud based on immigration in this day and age, it feels a good thirty years too late. We'll probably see a very good match that most fans won't care about until the finish and they will probably cheer Swagger.

This is clearly a match that screams we've got a few major names without a clear direction let's put them in a 6 man tag. The build for this as actually been okay, they are telling the story of about three bigger stars who aren't sure if they can trust one another. They are teasing that it's the Big Show who cannot be trusted but that looks likely to be a red herring.

The Shield proved at Elimination Chamber that with teamwork they can get the job done and I expect them to again be victorious. I'm predicting we'll see the long awaited Randy Orton heel turn and he will cost his team victory.

The Ryback vs. Mark Henry

Out of all the reasons for a match to take place this is arguably the lamest. After been attacked by The Shield, Ryback finds himself then being attacked by 'The World's Strongest Man'. Now Ryback was already scheduled to team with Orton & Sheamus, but after being attacked by Henry you would think that he would demand to be taken out of that match so he could get his revenge against Mark Henry.

That is the traditional and classic behaviour of a babyface that the fans can relate to and support. Do we get that? Of course not, Vickie Guerrero for reasons that were never explained decided to tell Ryback that he could only appear at Wrestlemania if he agreed to face Mark Henry. This makes him look really weak, it would have made far more sense for Ryback to demand the match from Vickie. It'll be a dreadful match as well, hopefully it should also be short.

When this match was announced, Dolph had this really sad look on his face. Guess he's not that happy with his position. Team Hell No have actually held the tag titles since September 16th and it really is time that that they dropped them.

The dysfunctional tag team as ran its course and personally I'd like to see Daniel Bryan move back to being a single and having decent matches. However there is some talk of Dolph Ziggler turning babyface and Mania could be a really good place to do it because the fans really do see his talent. On the other side of the coin, the WWE seem quite taken with Mr Langston and a run with Dolph as tag champions could be very useful for his development.

Wade Barrett vs. The Miz

So there you have it, hopefully the build for Mania greatly improves in the final two weeks. I seriously hope it does. Any feedback or thoughts then obviously feel free.
Posted by WrestleFigsUK at 13:56