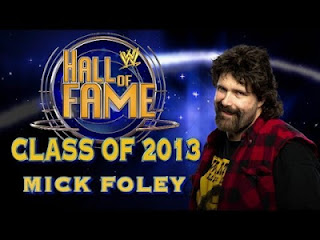 Take a moment and think of Mick Foley’s greatest talent.

What did you opt for? Was it his ability to roll through throngs of barbed wire? Was his penchant for being put through a flaming table? Or was it the extraordinary way in which he could take a dive off a sixteen foot high metal structure? Whatever it was, it was more than likely something that doesn’t do justice to the depths of his capability. In terms of professional wrestling Mick Foley brought a lot to the table, it could even be argued that he built one of the legs.

In his career, Foley showcased a spectrum of fortes in professional wrestling and they all span from the personalities he created. Popularly there were three, realistically there are four, pedantically there were several more, but let’s bring our focus to the three time WWE champion, Mankind. One of the most important aspects of pro wrestling is the person in the middle of the ring and how much the audience can invest in him or her. That investment demands believability, and Foley was one of the best when it came to presenting someone that met that demand. Within seconds of watching Mankind, you had a sense of who he was as his and when it all added up you received a quick realisation that you were seeing something. That something is the often elusive and mysteriously described ‘it’. When you look at something original, stand out and special, you are looking at ‘it’. And from the moment Foley made his debut as Mankind, ‘it’ was on display.

Mankind was a master class of presentation on several levels. Immediately, he is noticeable as something different which is a strong first impression to make. Many fall victim to following other wrestlers in an attempt to be better than them, but greatness becomes noticeable when it steps out of the queue and stands alone. Mankind stood alone on the WWE stage as something the fans had never seen before, and much was done to lay on that idea in a thick spread. The mannerisms were perfect; The confused wandering from behind the entrance curtains, the stark squealing during matches, and the irrefutable pulling out of hair aided by the bald patches. The belief in a masochistic and deranged individual is easily affirmed, and Foley presents a wrestler like no other who then operates in habitat accurately.

To hear Mankind cut a promo is a treat, from alluring demented elements to the humorous ones, and a story was always established going into a match. Foley brought the personality to the look of Mankind, to the style of wrestling, and to the promos he cut backstage. Smartly, he was integrating himself into the system WWE operates on and doing it in a way no one could compare to. So it came as no wonder that Mankind became aligned with a star like The Undertaker in strong feud, which saw the debut of a boiler room brawl, an innovation attached to Foley’s name. It’s no further wonder that fourth months after debut, he got headline status against Shawn Michaels for the championship title. The match also established Foley as a man who could keep up with a man of Michael’s energy and fire. Foley would go on to engage in the first Buried Alive match and be a main stay of the top WWE stars for years to come. His capabilities were not in doubt.

Arguably, Foley’s biggest impact on the wrestling world was his innovation. Inside the ring he would approach several actions in a unique way. The Cactus Clothesline became a famous part of his repertoire, showing a competitor willing to put everything into his attack, including risk of his own wellbeing. Further than that, the way Foley would connect with steel steps was astounding. After seeing every wrestler and their dog sent shoulder first into the steel, to see a man go knee first with a horrendous audio supplement, and then be thrust over the stairs was a breathtaking image. Foley’s innovation is parallel with many great superstar’s trademark innovations, which inspire and shape the wrestling of today. Foley is another who understands and shows how the tweaking and variance on the wrestling style, make for someone who goes far in the business.

In 1998 Foley gave audiences his most famous career moment, with a fall from the top of a sixteen foot high cell to an announcers table on the floor below. Despite the aforementioned aptitude for understanding how wrestling works then capitalising it to nth degree, it is this event and events like it that Foley is attributed too. Some people argue that hardcore is an element that doesn’t count as wrestling and Foley was once described as a glorified stuntman, but he offered an aspect of his ability that should only serve to elevate his status. McMahon described Foley as feeling that the audiences would be disappointed if he didn’t offer something associated with hardcore when he performed, and his actions present a man committed to his profession and to entertaining the millions who watch. Foley, despite having barrels of talent to spare, was willing to put his body on the line to deliver some of the most memorable if not the most memorable moments wrestling can offer. That is something worthy of applause. But one must understand the relevance of hardcore and its place in wrestling. Whether being set alight or taking great falls, Foley was always telling a story, sometimes as simple as a man with the with the will to carry on after great pain a suffering – a story which people will pay to see time and time again.

To many, Mick Foley enters the Hall of Fame as the man willing to take a lot of punishment, but a closer inspection to his body work shows a high calibre of wrestling aptitude. Foley had the ability to flesh out three characters on television, and convey them on every level that the medium offered. It’s very hard to find a comparison for what Foley displayed in his tenure, as his unique presence is the very thing that elevates him through the ranks of wrestling stardom. So his comparison should draw to those other unique presences, and as it is, he stands up well next to a blue-collared, beer-drinking hell-raiser. While not head of the bill for his year of induction, he is without doubt a top flight addition to the WWE Hall of Fame. Not only is Mick Foley a Hall of Famer, he is bona fide and should be well remembered for his contribution to wrestling.

The article writer can be found on twitter, @DerrieCatton. And as always you can find Wrestling’s Last Hope at http://facebook.com/WLH11
Posted by WrestleFigsUK at 15:05