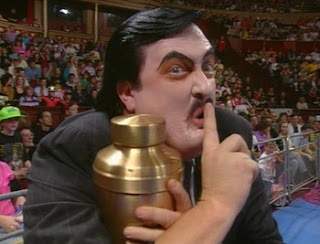 The world of professional wrestling today pay tribute to a legend, to an inspiration in Paul Bearer, who has been taken from us at a young age of just 58.

This morning I woke up in pure shock to hear that my favourite managing on screen personality had departed from earth, I was on top of the world before I read that title, I was exceptionally saddened.

Along with having an illustrious career with the WWF and TNA he is also commended with the fact that he was ready for anything, he participated in something that looked at the time exceptionally crazy, He was involved in an incident with a cement truck and a glass case. On June 27th in 2004, Paul participated in this stunt for the Pay-Per-View ‘The Great American Bash’ during this Pay-Per-View, Undertaker had defeated both the Dudley Boyz but still decided to ‘suffocate’ him, however, this was later debunked, but it was still amazing at the time.

Here is a link of the moment -
http://www.youtube.com/watch?v=wMvLoCVY1ko

I don’t really know that much about his TNA career alone because I spent more time looking into him being a manager in the WWE. Nearer the end of his time in the WWE, he did briefly turn face, as Kane’s manager, but he retired from on-screen performing after the WrestleMania in 2000, he then when on to serve as a Road Agent, stage manager, and a talent scout, his contract expired in 2002, which was when he joined TNA. He worked under the name Percy Pringle III.

Paul did make few appearances after this, but he didn’t really have a long spell back on TV.

Paul Bearer will always be missed and will always be an inspiration for all aspiring managers and how wrestlers can work well with a very talented manager. The Undertaker and Paul Bearer had a massive amount of chemistry and it just worked so well, both Undertaker and Paul were extremely shady characters, Paul with his high pitch voice and extremely pale face and the Undertaker with his tall, dominating and scary presence.

I was highly expecting to see Paul back on TV with the WWE soon with Wrestlemania looming, with Punk walking down to the ring with another golden man in Paul Heyman. This could have been a perfect opportunity to reunite the two.
Never Forgotten.

Thanks for reading.
Nick Mason
Posted by WrestleFigsUK at 09:46