The House Of Pain Hype Machine By Pinki Blush 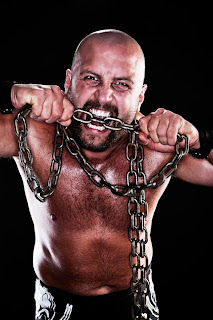 Here we have the main man from HOP STIXX (Photo credit: James Abbott)

It's been all over Facebook and Twitter in the last few weeks that the Nottingham-based House of Pain are 'taking over' Southside on Sunday 19th. A ballsy move from a relatively small East Midlands promotion, who in comparison to Southside, with their history of big name imports, and regular roster peppered with some of UK wrestling's finest talent, have seemingly little to bring to the table. But could they possibly be on the verge of pulling off the coup of the century?

On paper, it doesn't look too promising. Lacking in numbers, the HOP contingent on the current Southside roster seems to be at an instant disadvantage, however with an opponent for Stixx yet to be announced, and noone yet to come forward for the challenge, it would seem that HOP have Southside more than a little nervous.

What the Team HOP lack in number in the ring, they make up for in their loyal supporters in the area. The cogs of the social networking hype machine have been turning, with HOP fans openly calling out Southside fans, and the HOP team seems to be gaining some hefty support.

The fan interaction possible from shows such as this is, in this writer's opinion, the thing that can make or break a promotion. Giving the fans an opportunity to really pin their colours to their chests and pledge their loyalty to a particular promotion is what will keep people coming back for more. As seen recently at XWA vs. GPW in Morecambe, where the fans spent just as much time shouting at each other as they did cheering/jeering the action, it enables people to really interact with the thing they love, and can build a really great atmosphere.

Whether HOP can build on that support and use it to gain the advantage over Southside, and put an up and coming promotion firmly on the map, remains to be seen.

This writer believes that the proof of the pudding is in the eating, and suspects that there will be a large serving of humble pie on the menu for someone on Sunday at the Rushcliffe Arena. Either way, fans of British wrestling, and supporters of indy wrestling should be encouraged by the support that relative newcomers House of Pain have gained in the last few weeks.
Posted by WrestleFigsUK at 15:53