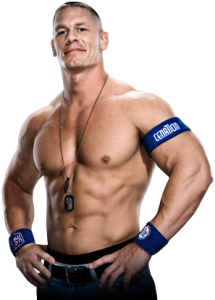 I'm sure some of you were wondering when this would come about. A column about one of my favorite wrestlers of all time. Love or hate John Cena, you have to respect him. His work ethic is what every boss in the world wishes his staff had. He works hard and reaps the rewards. Gone are the days where we could just watch wrestling and enjoy it. Now we over think it, analyze the arse out of it and are far more critical of its characters. We forget at times that they are indeed characters played by extremely talented individuals. I have read recently from fans, and pro wrestlers some dreadful personal verbal attacks (mostly I believe from Nash and former stars that for one reason or another didn’t continue with their careers in pro wrestling), not only regarding Cena, but many other wrestling legends. Sure, we all have our favorites and wrestlers we dislike; but, who they are on screen is a persona cleverly made by a creative team. It disappoints me at times that some people cannot differentiate between the character and the person.

The attitude era will never return, WWE now have to cater for a younger audience, and politics as we've learnt in recent times play a big part in decision making. We need to accept that those days are over and move on. I'm under no illusion as a fan that the primary goal for WWE and Vince is to make money, as much money as possible. Cena is a massive draw for the younger generation (and the slightly older like myself) and WWE are right to capitalize on that. He sells, fact. I admire how hard he has worked to further his career and the work he does on his own time for charity is to be applauded. A good role model for the younger generation, his character always stands up for what he believes in, treats others with respect and is humbled by his fans. The real love he has for the industry is clear for all to see.

I have been a Cena fan from the beginning, and have seen all his gimmicks, catch phrases and ring gear. Chaingang Soldier, Dr of Thuganomics, rapper, baby face, Super Cena, hustle, loyalty, respect, rising above the hate, I've seen it all. I would be lying if I said I've enjoyed EVERY minute of it. It's always difficult being a Cena fan, he never loses, he can’t wrestle etc etc. I have supported Cena for some years, and he has always attracted criticism from the slightly older generation. This year saw him lose the biggest match of his career. He was always going to lose to the most electrifying man in sports entertainment, but it still came as a massive disappointment. On Raw the night after WM28 Cena was booed louder than ever. Emotion was running high and I think he struggled to even deliver his promo. Then Lesnar came out and crucified him even more, things were not looking good for The Champ. Since April 1st he has worked hard to build his character back up. His fight with Lesnar was great. He got the crap beaten out of him, yet still prevailed. I said after WM28 he needed to do something big to win the WWE Universe back over. Turning Big Johnny into super heel was his cue for action. He played the part great and taking back WWE from Laurinaitis and Lesnar certainly didn’t harm his plight for popularity. It did however seemingly make true the fact that Super Cena never loses the big one, and again attracted some criticism. At Raw 1000 The Rock ran down to the ring to Cena’s aid when Show was attacking him, another clever move by WWE Creative. The feud with Big Show is absurd and I’m hoping this is Shows last big push before leaving WWE. Triple threat hell at SummerSlam was awful too! I was glad the championship didn’t change hands is such a ridiculous match, but was also disappointed not to see The Champ with the belt again. Last week on Raw, Cena cut an epic promo! Talking about his loyal fans and respect. It was wonderful for him and really put him over. I’m hoping for lots of one on one Cena / Punk action. They are both great wrestlers and I’m certain Cena will work hard to prepare. I love the pro wrestling industry and I get a lot of stick for supporting Cena, but I stand by my man!


I am inclined to agree with fellow fans that not all Cena's matches are of the best quality, and some storylines are totally absurd. However, we don't need to look back all that far to find some matches critics forgot! Cena has had some epic matches, brutal matches and damn right crazy matches. He is a beast of a man, always performs and gives 100% every match he has. His match at Royal Rumble 2007 with Umaga was one of the best I’ve seen, the other and most brutal I remember seeing was the first blood match with Angle. If you have never seen these matches, look that shit up!

I have got high hopes for Cena this year. I believe he will face The Rock again at Royal Rumble, and I believe he will win. I have always said Cena will take away the streak, this seems unlikely now, but a girls got to hope!

It’s not always easy being John Cena, constant pressure, training, travelling and some of the time carrying the company on his shoulders. When raining down the criticism we should remember that he does as he is told. It’s his job, he does it excellently and always gives 100%, that much at least can never be denied!