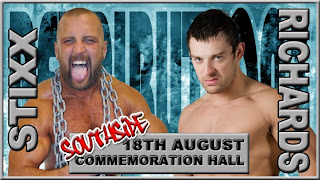 Last weekend Southside Wrestling did their first weekender. This may be lost on some people the enormity behind this but it is a sign that the company is really trying to push itself as the amount of money and effort that goes into promoting one show is a massive task. To do that for two shows so close together takes a lot of commitment to be successful. With some rather disparaging comments being passed between the Southside management and certain House of Pain roster members via social media Retribution and Supremacy were certainly looking like they had a lot on the line at them going in with House of Pain representatives in positions to claim all the gold over the course of the weekend. I made it down to Retribution 3, the first of the two shows, to see how it would work out for them.

Unfortunately I got stuck in traffic and missed the first match that featured Gresham getting the win over Robbie X. From what I’ve seen of these guys in the past this was probably a solid match and would like to track down a copy at some point to see how well it went. This marks another loss for Robbie X and you have got to wonder where Southside are going with this. Robbie is a great talent but is still quite young so regardless of the payoff to this streak there is still time for him to get past it. Hopefully though there will be some sort of rub in it for him at the end of the angle.

The second match featured LJ Heron taking on Ego Dragon. While the result was mildly obvious due to the big grudge match coming up at the next Huntingdon show LJ put up a great fight. With a few near falls really sucking in the crowd to believe that he might just pull the match off. The result however was academic as Ego Dragon claimed the win after a series of stiff kicks. It doesn’t help that LJ is not that established but that’s something that takes time to change so we’ll have to wait and see if that changes any time soon.

Up next Harvey Dale from House of Pain came out to announce that he would be introducing all House of Pain competitors on the show. The first of those competitors came out for this match in the guise of Max Angelus as he prepared to face Mark Haskins. I’ve missed te last couple of Southside shows but gathered pretty quick that Max is associated with HOP against his will, although on the entrance Max seemed unsure about how exactly to portray this. The match itself was solid and they seemed to get the face/face scenario across well with the crowd cheering both of them on. After a number of near falls the finish came when Dale tried to get Max to use his Money in the Bank briefcase but Max threw it back to him causing a distraction that Haskins took advantage of to pick up the win.

The last match before the interval saw Davey Richards taking on Stixx. The two have completely different styles but still managed to pull off a great match, a sign of the talent of both men. It started off quite heated going round the ring but started to cool off after a while with Stixx using his size to his advantage while Davey kept going for the ankle lock as well as throwing some stiff looking kicks, one catching Dale as he tried to pull Davey off the apron. Stixx’s chain came into play near the end as he placed it on the middle buckle but ended up going face first into it for a near fall. After fighting off a couple of anklelock attempts Stixx managed to get a win using a backslide with his feet on the ropes. He then went on to claim how the Predators would win tonight and tomorrow he would capture the SWE title bring the two top titles to the HOP boys.

The post interval match featured Marty Scurll defending the Speed King title against Noam Dar. The match featured a number of sequences of moves and counter moves that slowly descended into Dar working over Marty’s leg to set up for his leg lock. Interestingly this featured a lot of heel work from Dar seeing as the last two times they met up it was face/face. Eventually Scurll fought off Dar picking up the win with a tombstone piledriver. Immediately following the match Max Angelus came out and threatened to cash in his briefcase. However as Stixx and Dae Harvey were egging him on from the stage Max promised Scurll that it would happen, but not on the HOP’s time scale.

Lionheart took on MK McKinnan next in a solid bout. The match between the two was a great but I feel it was over shadowed by an incident with a person in the front row which Lionheart used the cheap heat method of spitting water in the kids face which, understandably, got the kids dad very upset. MK got the win and looked good, he even injured his ankle and you couldn’t tell.

The main event of the show saw Project Ego face the Predators to crown the first Southside tag champs. Travis reportedly suffered a shoulder injury the night before at PCW. During the first few minutes it looked like he had recovered from the previous nights injury but that seemed to subside quickly. After a heated start to the match it slowed down quite quickly as order was restored and an obviously injured Travis got back on the apron. This led to an extended heat segment with the Predators working over Kirby for the majority of the match. Even after the hot tag Travis didn’t stay in for long. Eventually the cheating ways of the Predators were too much for the Ego boys and they became the first Southside Tag Champs. Project Ego got a small measure of revenge as Kirby hit a step up ensiguri on Dale Harvey, much to the appreciation of the crowd, as the Predators watched on from the stage.

Overall there wasn’t a bad match on the card and it all came together well. The one biggest problem that comes to mind was the venue was unbearably hot. The heat seemed to help build the emotions in the crowd making them very heated. As I said with the Lionheart match I think the cheap heat with the guy in the front row drew the attention away from what was going on in the ring. I couldn’t make the show the following day but it certainly had a good set up with this one here.