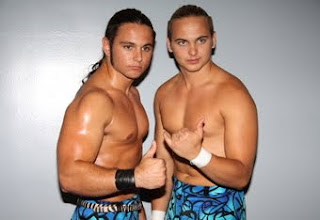 Above: Shaun's Tag Team of The Year - The Young Bucks

These choices are those solely of myself and are not necessarily the same as those of anyone else who contributes to this site. Now we have that cleared up let's got on with awards themselves.

Wrestler of the Year: Maasaki Mochizuki (Dragon Gate), putting it simply Mochizuki has had a hell of year. At the start of the year he was one half of the tag champions with Don Fujii but lost the titles in an absolute classic to Ryo Saito & Genki Horiguchi. This only led to a tremendous run as the top singles performer. He won the Dream Gate title in April against Masato Yoshino and then enjoyed highly entertaining title defences against YAMATO, BxB Hulk, Yasushi Kanda, Akira Tozawa & Ryo Saito all of which are worth tracking down. He finally lost the title to CIMA on Christmas Day but by then he proved beyond all doubt that he was of the finest wrestlers in 2011.

Tag Team of the Year: Young Bucks (Various), the main reason why the Bucks get my vote as to be because of their great performances in PWG. I know people go crazy for the Nightmare Violence Connection (Steen & Tozawa) but watching the Bucks operate is truly a joy to behold. Although they were greatly limited in their TNA opportunities they seem to deliver the goods whenever they have been given the chance and they seem a long way from being a stale act which I sometimes get the feeling with the Briscoe Brothers.

Match of the Year: CM Punk vs John Cena (WWE Money in The Bank), was it the best in-ring match of 2011? Probably not. What it did have was a strong story going into it, a very partisan crowd that made the match even better and two wrestlers who had a very good night. Simply put a classic.

Card of the Year: DDT 4 (PWG), if you are a fan of tag team wrestling than this is a dream card for you. Featuring the Young Bucks, Kings of Wrestling, American Wolves, Nightmare Violence Connection and the Briscoe Brothers among the competing teams this is as good as tag team tournament can get. Not only that you can also enjoy Joey Ryan beating up Candice LaRae.

Wrestling PPV of the Year: Money in the Bank (WWE) , give credit where credit is due this show was very entertaining. On top of the Punk vs Cena, we had Christian winning the World title against Randy Orton plus two very good MITB matches with a surprise winner in the Smackdown match in Daniel Bryan.

Pleasant Surprise of the Year: Mark Henry (WWE), most fans have complained that the WWE have been in desperate need to freshen up their main event scene which is fair. What the WWE finally realised is that if you push someone in a way that only emphasises their strength that it can work. Henry portrayed as a mean, strong ass kicker works because people can believe it. His interviews have also been very good and most importantly of all when it mattered most he got the big clean victories.

Why Bother Award: Kevin Nash (WWE), I'm not quite sure why the WWE decided that they needed to make Kevin Nash an imporatnt figure on WWE television. He was made to look distinctly average in his promos by CM Punk, was met by apathy by live crowds and signed off with a tedious 18 minute affair against his mate Triple H.

WTF Award: Booking of CM Punk (WWE), you would think after the positive response to Punk coming after the Money in The Bank PPV that the WWE would try and build on that success. Instead they did everything possible to take away from Punk what had worked, they booked him to lose on 5 straight PPV events and at one stage he started acting like he was Triple H's geeky friend. A disaster.

Wrestling TV Show of the Year: Infinity (Dragon Gate), imagine a wrestling television show which spends the majority of its time actually showing wrestling in front of appreciative fans. Infinity is that show, the promotion is very well booked which is just as well as I can't understand Japanese but can follow their PPV build and storylines. Same WWE and TNA haven't worked out this strategy yet.

Commentator of the Year: Excalibur (PWG), if you've never seen PWG your missing but if you have then you'll be fully aware of just how great Excalibur is. Generally very funny but never forgets that it's his job to put over the wrestlers and the matches. A simple technique that's very effective.

Gimmick of the Year: Doi Darts (Dragon Gate), this is the greatest thing. Basically Naruki Doi creates a dart board which is then used to determine the next challengers to the Triangle Gate champions or if a match will be for the belts. We've seen 3 different boards this year and it's made even better when they bring children to the ring to throw the darts. Highlights include Gamma smashing the board, and poor Doi cradling the broken pieces while crying and vowing revenge. Fantastic stuff.

Best Backstage Angle of the Year: Sting fires the Jarretts (TNA), this was fantastic television and ran for four segments. The first saw the Jarretts trying to re-assure one another that they would ask Sting to fire them and save the other. We next saw Karen telling Sting he should fire Jeff, Jeff then told Sting that Karen wanted to stay at home with the kids and therefore she wanted to be let go. We finally had Sting reveal to the Jarretts what they each said about each over and decided that TNA should not have just one of the Jarretts they shouldn't have any Jarretts. It was clear what was going to happen but Jeff and Karen were especially awesome all the way through. And just think it was Vince Russo who was mainly responsible.