A Fans Perspective: A week in Pro Wrestling, what I watched. Monday-Wednesday 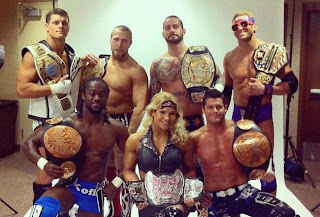 The Opening: I loved the opening to Raw, with CM Punk introducing himself, the NEW WWE US Champion Zack Ryder and the NEW World Heavyweight Champion Daniel Bryan, this helped legitimize Ryder and Bryan due to Punk’s popularity. I loved the passion shown by Bryan in his promo, the interruption also worked and a 6 Man Tag was a great idea, so I was fully on board with that.

CM Punk, Zack Ryder and Daniel Bryan vs. Alberto Del Rio, The Miz and Dolph Ziggler - I loved the entrances through the crowd, it showed that Bryan, Ryder and Punk are the fan favourites. This was a good back and forth match and I like the way Bryan made Del Rio tap via the Lebell Lock, as that helps those who believe his World Championship win was a fluke, that he is the real deal, due to him making a former WWE Champion tap out to the feared submission move.

With regards to the rest of the show, the more things change, the more they stay the same, is the phrase comes to mind!

ROH World Title
Davey Richards vs. Eddie Edwards © - I have had the opportunity to watch via rohwrestling.com but I can't, I guess I've been desensitized to long matches due to my TV Wrestling viewing, although I am looking forward to the rubber match tonight at ROH Final Battle 2011 live available on (GFL.tv) from New York City.

The first thought that comes to mind is when will this season of NXT end!? Two choices make it WWECW like show or start a new season of NXT Rookies as soon as possible! I tend to read the results/reports before I watch TV Wrestling nowadays, so I had a read of (411Mania’s Tony Acero’s NXT Report) it looked like a shippable show until Tyson Kidd’s name appeared in a match.

I could watch Tyson Kidd wrestle all day, some will say I'm biased due to Interviewing Kidd before he joined WWE in 2006, but this isn't the case. Kidd is a tremendous all-round wrestler, some will say he's not that good on the microphone, two things come to mind about that, 1. He hasn't been given much of a chance and 2. If he isn't why not give him a manager ala Vickie Guerrero, he would make a superb addition to her stable.

Tyson Kidd vs. ‘Showtime’ Percy Watson - I have a lot of time for Watson, he has a great personality and good athletic ability and he was the perfect foil for Kidd in this match, both brought their ‘A’ game to the table and this was an enjoyable match, with the right result (Kidd winning) to end.

Thanks for reading, as always feedback is appreciated. If you would like to contact me, I'm available on the links below: