A Fans Perspective: A week in Pro Wrestling, what I watched 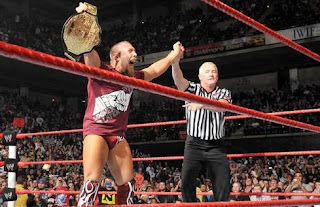 Hi I'm Oliver Newman and for those who know me I have been writing about the Sport that is Pro Wrestling since May 2004, for those who don't know me welcome to my debut piece on Wrestling's Last Hope, I hope you enjoy reading and as always feedback is appreciated.

WWE US Title
Zack Ryder vs. Dolph Ziggler © This was a good solid match, fans were thoroughly behind the Woo Woo kid Ryder, as he pulled out all the stops to win the U.S. Title including a He-lo and a hurricanrana. Ryder was finally able to win the Title hes been chasing for so long, thanks to the Rough Ryder and you could see how much it meant him and the fans during his celebration afterwards.

WWE Tag Team Titles
Epico and Primo w/Rosa Mendes vs. Air Boom (Evan Bourne and Kofi Kingston) © - I haven't been watching WWE TV lately so this match seemed thrown together to me, but what transpired was another good solid tag team match, nice to see highlighting of a previously dead tag team division, here's hoping this is just the start and more tag teams will be added to make the division better.

Sheamus vs. Jack Swagger
- Enjoyable match with the wrong result for me (Sheamus didn't need the win) but Swagger did as he is getting lost in the shuffle and his tremendous wrestling ability deserves better than that.

Daniel Bryan Cashes in his MITB Contract - This was a shocking but superb moment! Watching Bryan achieve his goal after his long journey from the Indies to WWE was very similar to when the late great Eddie Guerrero won the WWE Title from the UFC’s Brock Lesnar at WWE No Way Out 2004.

WWE Title TLC Match
The Miz vs. Alberto Del Rio vs. CM Punk © - This was a fitting main event, all 3 wrestlers went all out and produced an entertaining match, some spectacular moments including Rodriguez falling from the ladder through the table on the outside and CM Punk was able to retain and that was the right decision that I fully endorse.

CM Punk and Daniel Bryan on top of the Wrestling world, this moment was very reminiscent of WrestleMania 20 when Chris Benoit won the World Heavyweight Title and Eddie Guerrero retained his WWE Title, a truly great moment, probably my favourite in my 20 years as a fan of Pro Wrestling.