El Generico - Quite The Year By Ken Drabek 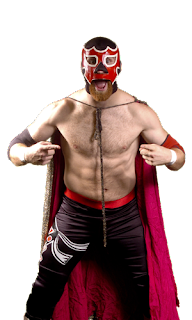 As 2011 comes to a close, the inevitable year-end review and/or “best of” articles begin to flood wrestling blogs and web sites, Wrestling’s Last Hope being one of them.

Instead of taking the standard approach of counting down the best moments, matches or wrestlers of the past year, I am instead going to take this opportunity to look back at what was unquestionably a banner year for one wrestler in particular, “The Generic Luchador” El Generico.

Generico spent much of 2010 in a rather dark place in Ring of Honor, embroiled in a bitter feud with his former tag team partner, Kevin Steen and his mentor, Steve Corino.

This feud brought out a darker side of Generico than we’re used to seeing, but the fun loving, lighthearted luchador would return after vanquishing Steen to end the year at Final Battle.

2011 began with El Generico and Paul London reigning atop the tag team scene in PWG but “The Generic Luchador” also found himself in contention for both the ROH and PWG World Heavyweight titles.

Though Generico would be unsuccessful in his championship attempts, both matches were highly entertaining and went a long way towards paving the road for the success that would come his way as 2011 rolled on.

In April, El Generico's partner Paul London could not make the team's scheduled title defense against the Young Bucks. Generico selected Ricochet to fill-in but the duo lost the belts to the brothers Jackson at what became known as "Card Subject to Change III."

At the end of April, Generico found himself teaming with Scott Parker and Shane Matthews in CHIKARA’s annual King of Trios tournament as Team ¡3.0le!

They were knocked out in the first round by the Osirian Portal, which allowed Generico to enter the 2011 Rey de Voladores tournament the following day.
He went on to defeat Zack Sabre Jr., Marshe Rockett and Pinkie Sanchez in the first round 4-way elimination match and went one-on-one with the 1-2-3 Kid in the finals match.

Generico claimed the “Rey de Voladores” prize and had one of the most entertaining and surprisingly emotional matches of the entire year with the often controversial Sean Waltman, in what he claims is the final time he will wrestle under the 1-2-3 Kid persona.

In June, Generico captured championship glory in ROH by defeating “The Fallen Angel” Christopher Daniels for the TV Title in a solid match at the Best in the World iPPV. Generico was heading into the new ROH era on broadcast television as the TV Champion.

He wrapped up a long running rivalry with Roderick Strong and the House of Truth when he faced Strong inside of a steel cage at the “No Escape” show in Charlotte. It’s not one of the most talked about matches of the year, but it quietly became one of my favorites.

Unfortunately, the championship glory would be short lived for “The Generic Luchador”. On August 13, Generico would drop the title at the debut tapings for the Sinclair Broadcast Group, losing to Jay Lethal after reaching the fifteen minute time limit and battling into overtime.

While Generico may officially be the first TV Champion of the Sinclair era of ROH, the title loss was one of his few lowlights of 2011.

He would end August on a much happier note, defeating Claudio Castagnoli, Willie Mack and his arch-rival Kevin Steen on the same night to win PWG’s 2011 Battle of Los Angeles tournament. He earned a shot at Steen’s PWG World Title in the process and also became the first man to ever win every title and tournament in Pro Wrestling Guerrilla.

At “Steen Wolf”, Generico cashed his BoLA championship opportunity in and defeated Kevin Steen in a ladder match to regain the PWG World Title.

Though the end of Steen’s reign came mostly at the hands of the Young Bucks interference, Generico and Steen once again had a hell of a war and reminded everyone why they had the most talked about rivalry in 2010.

Generico closed out 2011 in PWG by defeating the legendary Dick Togo at “Fear” in what is very likely Togo’s final match in the States. Not a bad notch for Generico’s belt.

“The Generic Luchador” enters 2012 as the World Champion in Pro Wrestling Guerrilla. He still has one opportunity to regain the ROH TV Title at Final Battle 2011 when he faces Mike Bennett and Jay Lethal in a triple threat match.

Whether Generico regains the TV Title at Final Battle or not, he still ends the year as a champion and has had one outstanding 365 days. Congratulations to “The Generic Luchador” El Generico for his numerous accomplishments in 2011.