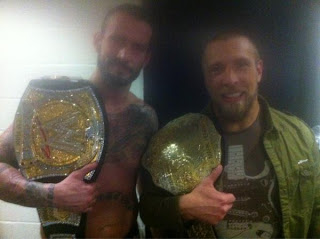 Above: This is a picture CM Punk tweeted following the PPV - Indy/ROH guys done good.

Yeah, I got up just before the World title match, first thing I heard was Zack Ryder beat Dolph Ziggler for the US title, which I must say I'm not overly happily about. Also, I missed Triple H vs. Nash, not sure what the match was like but I can't imagine it was too amazing.

So, the first match I got to see was World Champion Mark Henry vs. The Big Show for the millionth time. This was billed as a 'chairs' match. No matter what stip they brought in, this match was going to be as boring as ever. And to end, Show won with a 'knock-out' punch. As he was celebrating, Henry attacked him with a chair, then DDT'd him onto a chair and this led to Daniel Bryan coming out with a referee, he cashed in his MITB briefcase and 3 seconds later we had a NEW WORLD champion and that is Daniel Bryan.

I really have no idea where they will go with this, I would like to hope Daniel would be champion going into Wrestle Mania but it's doubtful, the WWE have given the IWC (internet wrestling community) what they want so I'm sure they will just take it away soon enough. I hope we don't get a series of rematches with Daniel Bryan against Big Show or Mark Henry but I suppose we will.

The second match I got to see was Intercontinental champion Cody Rhodes against Booker T. Beforehand they showed Cody attacking Booker backstage earlier and then when onto the ring he attacked him again. So eventually we had the match and once again, Rhodes attacked Booker but this time in the ring, it was a half-decent match, I actually put on twitter at the time the fact Rhodes had attacked him twice we would get a title switch, this didn't happen and Rhodes pinned Booker following a sweet finisher.

Next up was the main event, WWE champion CM Punk vs. The Miz vs. Alberto del Rio in a Tables, Ladder & Chairs match. It's no secret, I'm not a fan of The Miz, I have NEVER thought he should be in the main event picture but always thought del Rio should. Of course, as a long time fan of the independent wrestling scene and fan of ROH since day one, like with Daniel Bryan, I am always happy when Punk does well in the WWE.

I really liked this match I must say, there was some sick spots using all 3 of the gimmicks. Ricardo Rodriguez took a right nasty bump off a ladder and through a table at ringside. Before this, he had handcuffed Punk to one of the ladders, there and then I thought Punk was losing the strap. However, the Chicago native got the cuffs off the ladder and his quest to retain continued. The match carried on with various ladder spots and at one point, The Miz cuffed Punk to one of the decals and once again, I thought Punk would lose his title. But no, Punk unscrewed the decal and then went over to stop both del Rio & Miz who were battling each other on separate ladders trying to get the title. Punk went on to knock del Rio off, then while Punk & Miz were off the ladders, Punk hit The Miz with the GTS and he went up and grabbed the title so STILL WWE champion CM Punk.

I liked the match, I said on twitter, I don't watch much WWE but was there a better match in the WWE this year, I know people may say Punk vs. Cena at Money in The Bank or Triple H vs. Undertaker at Wrestle Mania but I really liked this one over those two.

Of course I also like the fact Daniel Bryan is the World champion, I just hope they don't f**k it up.

Hit me up on twitter @WLHSTU
Posted by WrestleFigsUK at 20:01