The Dichotomy Of The (Total) Divas Division By @JoeyLDG 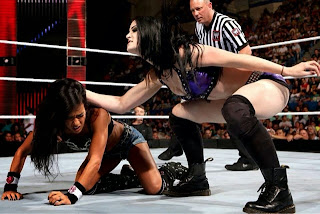 The Divas division is in crisis. The biggest news story of last week was Eva Marie getting her boobs done while on leave for an “injury”. This was in spite of the fact Paige featured on Chris Jericho’s podcast, talking at length about her career, her family’s wrestling legacy and everything in between. Paige was a lively, intelligent,and interesting guest. Eva Marie has bigger tits now.

Long the running joke of the WWE, the Divas division has entered its weirdest stage yet, with two conflicting ideas of what these female wrestlers can really offer, one epitomised by reality show Total Divas, and the other byits polar opposite in every sense, NXT. Unfortunately, the reality is that, quite often, these girls are hired because they look good and are camera-friendly, not due to any discernible wrestling talent. This, in turn, means it’s a struggle for someone like Becky Lynch, for example, to make an impact opposite her buxomed, kiss-blowing rivals.

The biggest shock of the year, Divas-wise, came not withthe announcement that the third season of theirludicrously popular show had gone into production, but when we were gifted an actual feud as AJ (arguably the best female wrestler on the current roster) faced up against Paige. A younger, British upstart from a legendary wrestling family, Paige killed it over on NXT before making a triumphant debut on Raw and instantly snatching the championship in the process. Just to put it into perspective, her buddy Emma was not so lucky – saddled with a gimmick that didn’t quite translate over,she has since been relegated back down to the minors.

Paige and AJ took each other on at every opportunity, swapping the belt back and forth and trading barbs formonths, as the Total Divas blended into the background,much to our collective amusement. And, although their bouts were nearly always annoyingly short, as Divas matches tend to be, their chemistry was undeniable, not to mention they can actually wrestle when given half a chance, which is more than can be said for their colleagues who decorate ringside more than anything else. 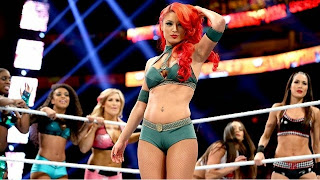 Depressingly, the whole thing came crashing down at Hell In A Cell, in a match not given nearly enough time to breathe, after which AJ inexplicably found herself feuding with Nikki Bella instead, while Paige was left to buddy up with Alicia Fox. Of course, the two couldn’t continue fighting forever but surely they could’ve dragged it out a little bit longer, even so Nikki – who has potential, in spite of her blow up doll looks – could growa little bit more into her character. After all, worse feuds have been given longer to fester and mutate before finally being put out of their misery.

Even worse, at last weekend’s Survivor Series, AJ lost the belt to Nikki in a matter of seconds, after her sister distracted her with a pre-match kiss. Paige, on the other hand, looked set to emerge victorious from her traditional elimination match only to lose it in the last moment to Naomi, who, like Nikki, is one of the stars of Total Divas. Adam Rose was given more airtime in comparison. Are we really at a stage now where a feud with a Bunny is deemed more worthy than one we’ve spent months drooling over, and that we actually care about? There’s no way that Rose’s debut, and subsequent work on Raw/Smackdown, had even half the impact of Paige’s and yet he’s deemed more worthy of a storyline than she is.

It’s no secret female wrestlers are given less attention, and indeed less credence, than their male counterparts.This has nearly always been the case, even with legends such as Trish Stratus and Lita, who kicked butt in their heyday, but whose achievements are dwarfed by those of their male counterparts. We’ll always think of The Undertaker, or Stone Cold, as the “real” legends of their time. And, in a decade or so, the same will be true of AJ and Punk, Paige and Dean Ambrose, etc.

However, stumble over to NXT and it’s a different story entirely. In NXT, the women are just as valued, and as popular, as the men if not more so. NXT is a one-hour show, compared to Raw’s mammoth three, and yet the Divas somehow get more time than their main show counterparts. Gifted storylines, character arcs and often quite complex matches, they’re afforded the space to show off what they can do, to grow and mature as fighters before moving up to the main roster where, strangely enough, they’re then lost among a sea of Adam Roses. 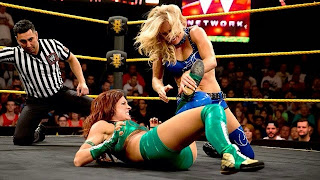 Rumours abound that AJ is planning to leave the WWEafter TLC. She’s openly said she only cares about wrestling, not fame, and would therefore rather be caught dead than appear on Total Divas, so her future with the company remains in doubt either way. But, in her head, it must seem hugely unfair that Nikki has earned the right to a match because of the show, when Paige has foughtfor the chance, and is now left behind with the others, none of whom can hold a candle to her in the ring.

Considering Paige herself just signed on for series threeof Total Divas, one could reasonably assume that the opportunities to progress as a Diva on the main roster are few and far between. Most of us would never even haveconsidered Paige a candidate for the show, and there’s a widely-held assumption that her appearing on it is going to hinder rather than help her career, because it’llcompletely change how we see her.

Even though Stephanie Mc Mahon has publicly denounced the suggestion that Total Divas can’t also be champions, is the only option for these women, many of whom are gifted wrestlers, to either quit or agree to play a caricature of themselves on a reality show? Is that really what it’s come to? Take Summer Rae, who had a great debut at Hell In A Cell 2013. Nowadays, she’s more well-known for being Fandango’s escort than for her demonstrable talent in the ring. She screamed her way through Survivor Series, because that’s how she’s presented on the show, as a dumb, loud bitch.

Total Divas itself is a curious case of well-judged, albeit ultimately very depressing, marketing strategy. Natalya, for example, who is wrestling royalty in her own right,presents her marriage to fellow wrestler Tyson Kidd as constantly in danger of dissolving, and herself as a shrieking, demanding harpy who never seems to be happy. That lie is kept up on Raw, where they accompany each other to matches and fight in public.

However, the show, when it chooses to deal with theparticipants’ in-ring antics (which isn’t often), presents the Divas as the driving force behind the WWE, their matches full of power and amazing feats of strength. Watching Total Divas, one could be forgiven for thinking that women’s matches often last longer than a minute, or that they could even be Main Events. It’s interesting to note that the goal of Total Divas seems to be to sell these women as two completely opposing ideals, namely hot, sexy ladies with tonnes of capital-D drama in theirpersonal lives, and talented, butt-kicking wrestlers who can hold their own in front of millions of screaming fans. 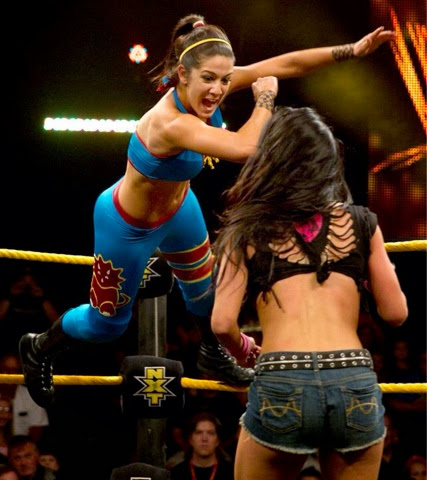 In fact, the Total Divas cameras, rather curiously, always seem to catch signs for the girls that even the most eagle-eyed viewers won’t have noticed during the original broadcast. If you’ve ever attended a WWE show, you’ll know that signs for the dudes far, far outnumber those for the ladies, but that’s because nobody really takes them seriously as wrestlers. Total Divas trying to right this wrong by lying to us is counter-productive. And, in reality, they can’t be both anyway.

There’s an interesting dichotomy at play in the WWE right now. NXT is so female-friendly, Renee Young is on commentary, holding her own and showing up even the great William Regal. But when the ladies graduate to the main roster, suddenly what they’ve built on NXT no longer seems to matter. Take Emma who, when her gimmick didn’t catch on quite as quick, was reduced to being Santino Marella’s valet. She was huge on NXT, and still is.

Add to this the fact that the Bella twins are, coincidentally or otherwise, right in the middle of the main Total Divas and Divas storylines right now, and it’s a wonder women don’t emerge kicking and screaming from Triple H’s training grounds. It may simply be a case of a difference in fans, or the format of the shows, but something is lost en route from NXT and if Paige’s signing up for Total Divas is any indication, it’sbecoming increasingly difficult for female wrestlers toprogress in the WWE. 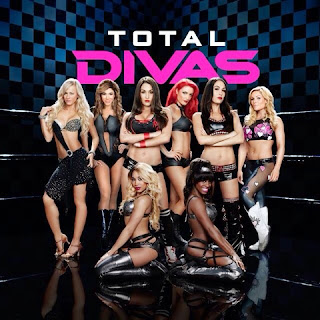 Only time will tell if AJ sticks around for a bit longer – and here’s hoping she will because without her we’re really fucked – but, regardless, the way in which these women are being sold to us needs to change, and soon. There’s no reason why what works on NXT shouldn’t translate to the main stage, not if there’s genuine momentum behind someone and she has actual ability,too. There will always be a demand for eye candy, but it should not be the basis for an entire division. If these ladies have genuine talent, then they shouldn’t have to shill themselves on a reality show, either.

We can live without the Rose/Bunny feud, but if the AJ/Paige storyline is the last decent Divas one we get, then it won’t be long before Total Divas is the only place these often very talented women appear. The sad part is, we probably won’t even really notice the difference.