Do You Remember The First Time? By Nick Hughes

Recollections from a lifelong wrestling fan. 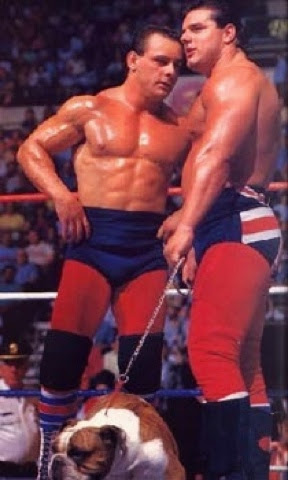 In the weeks and months to come I will hopefully be (shoulder) tackling some of the big issues surrounding the business that is wrestling…but first I thought it would be fun to take a trip down memory lane and see what brought me to where I am now.

I think the first time I was aware of wrestling, would be sat on my dad’s knee on a Saturday afternoon watching World of Sport. As a child of 4 I was fascinated by the more larger than life heavyweights, and sad to say, my first real wrestling hero was Shirley “Big Daddy” Crabtree. My father, who had spent a good part of his childhood at the Liverpool stadium, always cheered on the heels, especially the more athletic smaller guys like “Crybaby” Jim Breaks, and his absolute favourite Mark “Rollerball” Rocco (who my dad would never fail to remind me, was the son of “Jumping” Jim Hussey, who was a favourite of my dad’s growing up). My grandfather was also a big fan, and he would regale me with tales of watching Ricky Star and Billy Two Rivers while we sat and laughed our heads off at the antics of Les Kellet or Catweazle (my granddads two favourites).

So yeah the bug hit me pretty early on, and for the next 8 years or so, I would not miss the wrestling on ITV. I supplemented this by watching the odd show that mades it’sway to our local theatre (Queens Hall in Widnes), were I finally got to see the likes of not only Daddy and Haystacks, but people like Johnny Saint, Alan Kilby and Alan Dennison. We had a caravan in Towyn, so most Wednesdays during the school holidays, we would make our way to either Rhyl Town Hall or The Colliseum, to take in shows put on by the local legend Orig “El Bandido” Williams. We saw a smattering of TV “stars”, like Tony StClair, but supplemented by local guys like The Mighty Chang.

Then one day back in 1986..everything changed I spotted a copy of a magazine called Pro Wrestling Illustrated in a newsagents in Abergele. It was the fabled “supercard show” edition, and featured not only Hulk Hogan and King Kong Bundy fighting in a cage as part of Wrestlemania 2, but also pictures of NWA champ Ric Flair and Dusty Rhodes, fromStarcade. The centerspread also featured a picture of Bruiser Brody taking on Terry Gordy in a barbed wire rope match, from WCCW Parade of Champions..this bloody image fascinated me and I decided I had to see that bout, and all of the other stuff featured within the magazine.

Bizarrely at almost the same time World of Sport run a show that featured 3 matches from the WWF. I must have worn the videotape out as I watched and re-watched the show. It started with The British Bulldogs going against the Hart Foundation in the Boston Gardens, and then there was a squash featuring Kamala taking out Salvatore Bellomo, and then finished with a Lumberjack match of Hulk Hogan v Randy Savage, from Madison Square Gardens. I was hooked!. There were a couple more 'WWF specials' before WoS closed it’s doors for the final time, but WWF continued being broadcast through the night on ITV Granada (before switching to WCW a short time later).

My dad had found a regular supplier (in the strangest of places) off not only PWI, but all of the “Apter mags”, and alsomags being published by George Napolatano. Speke market in Liverpool had a stall that sold magazines that were a month old (I am guessing back before the days of “sale on return”), and every week would pick up different wrestling magazines for the princely sum of 20p each..I was in wrestling heaven, and soon my bedroom was filled with pictures of The Road Warriors, Ric Flair and others..by this time I had moved on from my Big Daddy love in and favoured the likes of The Four Horseman and most of what the NWA was doing over WWF. I would spend hours poring over the results section in PWI and scoring the matchups and then setting my own in a precursor to playing “fantasy league booker”.

Around this time Satellite TV was becoming the next thing, and although we did not have it, I used to give tapes to my friend who would record WWF from sky, and also numerous channels like Screensport, Lifestyle and Eurosport, which featured the likes of  NWA, AWA, Stampede, WCCW and a number of other promotions. After endless months of badgering my dad finally broke and purchased Sky..truth be told, I think it was a cheaper option than supplying me with multiple video tapes each month to get friends to tape shows!

The next significant moment I can remember was the announcement that the WWF was coming to the UK for a show at the London Arena (situated in the delightfully named  “Isle of Dogs”). Again after a prolonged period of badgering of my father he agreed that we could go. So after a long old car ride we made our way into the arena for a show headlined by Hogan v Savage. My dad was pleased to see both Rollerball Rocco and Skull Murphy, who featured in a dark match. But for me, seeing the likes of Hogan, Savage further cemented my love for the sport.

My dad bought a newspaper on the way home called “The Sunday Sport”, and surprisingly it featured an advert to buy videos of various wrestling shows, and before too long I was the proud owner of the first Royal Rumble, and inaugural Survivor series. I run copies of the shows of to my mates, who were also bitten by the bug..this would become my first experience of “tape trading”, although I did not have anybody else to trade with!.

Fast forward a couple of years (literally using VHS!) and the UK got it’s own wrestling magazine in Superstars of Wrestling..it was awesome to read letters from other fans, and what really peecked my interest was the section were people could post adds. It was here that I come across such names as Glen Radford (or “Mr Illiterate” as my mum dubbed him, due to his indecipherable writing) and Rob Butcher, and my thirst for wrestling was quenched in the form of badly photocopied A4 sheets listing page after page of wrestling shows, that could be bought for £8 for 3 hour tape or £10 for 4hour tape. I quickly filled my bedroom with tapes from companies like W-ING, FMW and a young upstart company called Eastern Championship Wrestling.

An advert for a shop located at a place called The Coliseum in Manchester made me take what would become a regular pilgrimage to Manchester. I become friendly with the owners Mike Hough and Keith “Ruffneck” Colwill, and before long I was supplying the store with tapes of lots of shows I had purchased from various tape traders, at the same time I started trading myself..this would be just as VHS was being usurped for the sleeker, clearer smaller new kid on the block DVD.

The internet was also in its infancy and people were starting to talk about and trade wrestling shows on line. One of the first people who I dealt with was Dave Pick, who turned me on to IWA-MS and CZW. Over the years Dave would take more money from me than is decent to say, but I had an awesome room filled with Tapes and DVD’s from promotions from the four corners of the wrestling world. The next ten years would be filled with so many awesome memories of both attending shows (ROH at the Olympia in Liverpool, multiple quality shows at 1PW), and with discovering amazing promotions like PWG, Chikara and so much moreover the information superhighway.

All of which brings me to the last couple of years. I started attending a local promotion called Infinite Promotions, and after the first couple of shows, I approached the owners about maybe getting involved with running a merchandise stall at there shows..by this point I had so many DVD’s, I had run out of room to store them, so by offloading some shows, it would both free up room, but also give me more money to buy.morewrestling shows! (it really is like a drug at point!). So that was the latest flagship moment/memory. I have worked closely with both UK based and International talent, have pictures with tons of workers, have had Davey Richards and Mike Elgin tell me I had “lots of cool shit”, and now also supply shows to a number of British workers. I now run merch for HXC based in Manchester, working with my old friend Mike Hough and love every minute of it. Recent I have started writing show reports that get posted on The Indy Corner, which for a technophobe like me is a big thing..even talking of doing a bit of podcasting in the near future!.

The Indy wrestling scene in the UK is at the healthiest I have ever seen it. As a north west based fan, I have managed to see the likes of CZW, ICW and shortly ROH come into my region, and the likes of Infinite Pro, HXC, Tidal and PCW all put on awesome cards using both home grown talent and imports. I am watching and enjoying more shows than at any other point in my life.

So there you have it, my journey from there to here and the significant points along the journey. Would love to hear your own tales of the significant moments in your wrestling fandom life…so please post your replies, and lets all take a moment to wallow in a bit of self-indulgent nostalgia!