How Far Is Too Far? By Craig Hermit 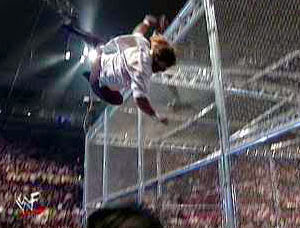 "The problem with being a hardcore wrestler is, by its very nature, we give of ourselfs and our bodys and our hearts and our souls and for each one of us who gives there's bloodthirsty lowlife fans out there are only willing to take" - Mick Foley during his anti ecw promos.

Injuries in wrestling, it's one of these things, we as fans hear about it through social media, we see it live or we see it on Botchomania.

Now as a fan, I respect everything wrestlers do in the ring, the workrate, the training, the cardo, there drive and there passion to succeed in an industry that can be as cut throat as a lionsden but what happens when something goes wrong within that ring.

Personally, a few weeks ago I was injured, broken bones, badly hurt but that isn't relevant, it had me thinking about wrestlers, what happens if they were in the situation I was, bedridden, out of action, unable to do anything and as a fan, my understanding of the injuries within the industry is knowledgeable but the depth of my understanding not as much.

I mean if anyone has bought a WWE dvd or tape we would have seen the two minute clip of injuries, then the message "don't try this" at the end before then dismissing the message, clicking play for reason you bought the DVD in the first place.

If I saw someone get injured in a wrestling match, I'd sympathise with the situation but I wouldn't think about it afterwards. Wrestlers, well they don't have that luxury.

Recently as I saw clips from youtube, the videos specialising on seeing countless wrestlers getting injured with soundtracks and "comical motifs", I started to think, about there lives, how are they going to continue doing what they do? How are there lives going to change? And how can fans chant, "you fucked up!" when you see the wrestler is in agony.

Am I overthinking this, I don't think so, if you have seen the movie 300, there is a scene where King Leonidas says to the Arcadians:

I imagine this with wrestlers, they may work in a call centre, coffeeshop or some place during the day but deep down they are wrestlers. It is there passion, ingrained within them and when they get injured, the pain - extreme the uncertainty - shocking, infront of there fans - heartbreaking. Then to return, if they return, the courage they have is to be not just respected but admired.

In an age where the letter of wrestling is being pushed, prodded and bent to levels at times where fans want to see blood and hardcore wrestling extra care and work must be used to make sure everything is being done to minimise the risks being taken, yes, risk comes with being within the ring and yes, they are trained professionals but all it takes is one slip, one hard shot and one failed moonsault, then something deverstating happens.

As fans we love to encourage wrestlers to go one step further, case in point, WWE Hell in a Cell event, John Cena vs Randy Orton, ignoring the fact it was rematch 100 plus between the two men, they used every weapon they could find and gave as much hardcore action as they could within the Cell, afterwards fans were complaining about the fact that there was no danger, no one falling from the cage.

Next match, Dean Ambrose vs Seth Rollins, from the start top of the cage, wrestlers fall off the cage and the match is brutal throughout. Feedback, some fans complain about the ending ruining the whole match. In the case of Hell in A Cell matches does it take matches of the like Mick Foley vs Undertaker for some fans to be pleased with what they have seen? I hope not.

Does blood?, someone falling off the ladders? the cages? Even fire? Does it make it a more believable storyline in a match, I'll agree it makes its more exciting but there has to be limits.

Now fans reading this don't think that I'm going on a rant and wanting wrestling to go back to the way of World of Wrestling in the mainstream 80's because I don't, my point is this, the hardcore, the extreme and the death-defying matches should be used on the rare occasion and planned out to make sure the minimum can go wrong.

But in the world of wrestling everything a wrestler does within that ring could result in injury, so respect them and if they are perform a move that you don't think is that exciting, think about the last time you hurt yourself and think could you do what they do in that ring in front of everyone with the risks provided. I think not.

Then theres the people that distance themselves and say its fake, my advice to anyone who has a friend like that take them to a live show that thought will change very fast, the final words on this subject should be left to a legendary commentator,

"Where do you learn how to fall off a twenty foot ladder!" - Jim Ross.