Vince Russo, Did He Really Kill WCW? By Stuart Rodgers 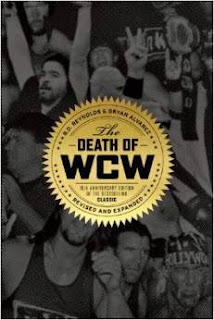 So I am listening to The Swerve podcast hosted by Vince Russo, and on this current episode he has the co-author of 'The Death Of WCW' book and owner of the wrestlecrap.com website RD Reynolds. Of course, over the years, Russo has been shall we say, the 'fall guy' for the death of WCW but did Vince Russo really kill WCW?

When I listen to podcasts be it The Swerve or any others I usually switch off in my head when they talk about TV ratings. Russo is very proud of the ratings swing that took place in WCW when he was there writing the show with Ed Ferrera back in the day and again, I guess it is something to be proud of but it's not something I am interested in. However, a point that is brought up during the interview is Reynolds says one of the reasons WCW went under was because they (WCW) were not selling enough tickets to house shows, they were not having good enough PPV buys and they were not selling enough merchandise. So Reynolds' opinion is, as Russo (with Ferrera) was writing the flagship TV show, Monday Nitro and in his opinion the TV show should be a vehicle of sorts to drive the house show attendance up, the PPV buy rates up and merchandise sales up, and the fact WCW went out of business, Reynolds would say this was Russo's part in killing the company. Russo, clearly says when he was in negotiations with WCW before coming in at no point, house shows, PPV buy rates and merchandise sales were never discussed with himself and Ferrera so, the fact they went out of business, Russo washes his hands of any responsibilty for the demise of the promotion.

Now, in my opinion, and that's what it is, I believe the role of a TV show which has an end product like a PPV should be to build up interest in said PPV so the fans watching the TV show will want to go and buy the PPV. Same with house shows, fans should look at the TV show and think the product is good and want to go out to a house show and buy merchandise while they are there. Again, this is my opinion, I'm sure Russo will have his own and you will have yours.

In closing, I have no idea who is responsible for the death of WCW, there were 5 people on the cover of the original book (Russo, Bischoff, Hogan, Hall & Nash) but Russo believes if anyone would be responsible it would be a TV executive by the name of Jamie Kellner. I am interested in your thoughts on this subject, hit me up on twitter @WLHSTU

Visit Vince Russo's site http://pyroandballyhoo.com and subscribe to his podcast, The Swerve on iTunes. And as mentioned earlier, RD's website is http://wrestlecrap.com and you can buy the revised version of the book The Death of WCW from Amazon and if you're in the UK, use this link - http://tinyurl.com/WCWBook
Posted by WrestleFigsUK at 09:07