Remembering a Forgotten Classic (Reflecting on AJW) By Shaun Nichols 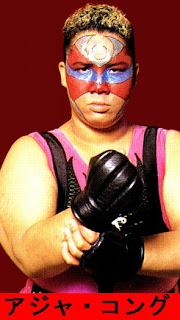 Long time readers of this site and perhaps those who read when WLH was around in a sheet format will probably remember that I've always been a big fan of Japanese women's wrestling in the heyday of the early to mid 1990's. Most fans are aware of legendary shows like Dreamslam I and II, Big Egg Wrestling Universe and others may have actually seen shows like Dream Rush, St Battle or took the time to seek out legitimate classics like Manami Toyota vs Toshiyo Yamada (Hair vs Hair, and we are not talking about the loser getting a little trim).

The year of the two Dreamslam shows of 1993 were a fantastic example of several promotions working together to put on superb events which saw fans witness ***** star calibre matches, the first saw AJW's Akira Hokuto take a terrible beating against Shinobu Kandori before eventually being victorious. A week later AJW's representatives of Manami Toyota & Toshiyo Yamada lost the tag titles to the JWP team of Dynamite Kansai and Mayumi Ozaki in what was their second of their awesome trilogy of matches.

AJW were the only promotion to host these major events and on 31/7/1993 the JWP promotion hosted an event called Thunder Queen Battle which simply put is one of the greatest matches of all time. It pitted JWP vs AJW, two teams of four wrestlers in a 60 minute match. The first 20 minutes would be split into four individual singles matches and would then culminate in a 40 minute featuring all eight wrestlers. Pinfalls could happen at any time, there would be no eliminations and it was simply a case of the team with the most decisions at the end won. What as surprised me is that this match format as never been copied elsewhere which is pretty disappointing as it worked so well here, maybe it's a combination of promotions not having the quality of worker to make it work or when you've seen the match done to perfection it might make sense to avoid the temptation to try and emulate it.

Anyway let me introduce the teams, representing AJW were Aja Kong, Kyoko Inoue, Takako Inoue and Sakie Hasegawa going against Team JWP who consisted of Dynamite Kansai, Mayumi Ozaki, Cuty Suzuki and Hikari Fukouka. The fans were going crazy before the match even started and it was very clear that the two big hitters (Kong and Kansai) were looking especially focused.

The initial pairings worked really well and told a very simple and thoughtful story. The fans were desperate to see Dynamite Kansai go against Aja Kong so they were saved until last not to overshadow anyone else in the match. The match started with Hasegawa facing Fukouka, this made sense on two levels. Firstly they the least experienced out of the wrestlers but they also had an immediate story to tell. Hasegawa had defeated Fukouka at Dreamslam II, now was the time for revenge. Fans immediately started a 'Hikari, Hikari' chant but it was Hasegawa that dominated until she got caught in a roll up after going for a spinning toe hold and all of a sudden the much favoured AJW team were losing 1-0.

The surprise pinfall so early, ensured the fans were not going to switch off. Next was Kyoko Inoue vs Mayumi Ozaki and Ozaki took no time in nailing Kyoko with 2 DDT's in an effort to increase the lead. Kyoko responded by going for long term damage including her famous giant swing spot which seemed a curious choice considering Mayumi would have at least 10 minutes to recover.

We then had the glamour element as Takako and Cuty went at it but still the AJW still trailed 1-0 even after Takako had dominated most of her period. At the start of the final 5 minute period Kansai charged at Aja only to met by a perfectly nailed spinning backfist which knocked out Kansai. Aja tried to pick up the limp body of her opponent but couldn't do so. So she simply instructed the referee to count Kansai out, while staring at the smaller members of the JWP team which gave a clear message of 'I've knocked her out, what do you think I'm going to do to you?'. Scores were tied at 1-1 and while Aja was never in any trouble during the rest of the period, Kansai did start to get some offence in to give the JWP team some hope.

The dominance of Aja Kong was even more solidified only 3 minutes into the final 4 vs 4 finale. In a melee she nailed poor Cuty with a crushing elbow drop and the AJW team had now completely bounced back from their earlier setback and were now leading 2-1. The match began to settle down with frequent quick tags from both teams. Kansai was determined to restore her credibility after the early loss, Ozaki and Kyoko were both simply fantastic as the two major workhorses in the match. Aja cut a threatening figure anytime she was in the fring and the AJW team decided at the 30 minute mark that they would settle on a new strategy.

Anytime of the AJW girls got in trouble, Takako Inoue would make the save. This did wonders to upset the crowd and the way she would give them smirk as she made her way back outside was excellent. During the match there was a clash between Kyoko and Ozaki which left Kyoko with a bad cut and Ozaki had a left eye that nearly swelled shut during the rest of the match. Not that either of them allowed that to stop them putting in career defining performances.

It was about at the 45 minute point that the JWP team really started to go all out to get a pinfall that would even the score, it had been over 20 minutes since Aja had pinned Cuty and now the fans wondered if their team could even the odds. Hikari Fukouka was the main star at this point using victory rolls, moonsaults to gain a number of close 2 counts but it was never quite enough. Finally at the 50 minute mark Kansai got her redemption and used her splash mountain (think Razor's Edge) on Kyoko to even things up at 2-2.

It was pretty clear at this point that the match may end with this score but it seemed unlikely that we would see anymore than one pinfall that would give victory to that team. Aja entered the fray once again to try and give her team the all important win and it was Mayumi Ozaki who took the brunt of her anger. The normally elegant Ozaki looked like anything but. With her left eye nearly shut and Aja beating the hell out of here, she really looked like the ultimate babyface in peril. Although she eventually made the tag to Kansai, Kansai wasn't able to run wild and quickly found herself on the defensive.

With only 3 minutes or so the match completely broke down into a number of hot falls, desperate kick outs and finishers being hit all over the place. The fans were all standing up cheering their team on but each time it looked like we would see the winning pinfall it was broken up. In the final minute Takako tried to lock Ozaki in her cross arm special but she escaped only to catch Takako with her tequila surprise suplex in a last minute attempt to snatch the win. The referee slowly made his count and Takako who had taunted the fans for so long could not escape. Against all odds JWP had defeated AJW 3-2, the fans are screaming 'JWP, JWP' in their happiness.

They had witnessed one of their greatest matches ever seen. I urge any wrestling fan who has not seen this match to do so, you really won't regret it.