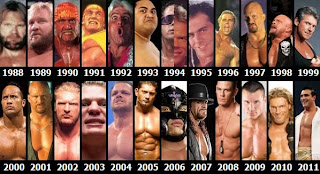 The Royal Rumble is less than 7 days away and I thought what better way than to share my favorite Rumble moments/ Matches. This indeed is my favorite pay per view and every year I look forward to it. Now let’s get right into it.

The 2002 Royal Rumble couldn’t have been more “Perfect” the Rumble was hyped around the Undisputed title being defended for the very first time on Pay Per View and the return of the King himself Triple H. The 2002 Rumble had a great start to finish, after having Goldust and Rikishi entering as number 1 and number 2 respectively they battled it out until the finally a few superstars had come and gone glass shattered and out came Stone Cold Steve Austin. After Austin opened a can of whoop ASS then came Triple H, Undertaker, Kurt Angle and the late great Curt Henning “Mr Perfect”. This rumble was great to see Austin and the game beat the hell out of each other and Maven get his spotlight after Dropkicking Undertaker then getting his ass kicked all over Atlanta.

The Three Faces of Foley:

The 1998 Royal Rumble was simply one of my favorite Rumble’s because of watching Foley appear In the rumble three times. I thought it was perfect as he first started the match with Chainsaw Charlie (Terry Funk) who swung chairs on Foley like crazy. Other than that I thought this match was great because of the fact that Stone Cold Steve Austin he wasn’t at the main event level yet, but the outcome of this Rumble was probably the most obvious of any Rumble in the history of the event. There was nobody else. Even though he suffered a brutal neck injury at SummerSlam 1997, he returned to the ring three months later at Survivor Series 1997 and by the time we got to the Rumble he was looking close to 100% again. Besides the Rumble there was of course the Casket Match its self, at the time “Burning” a casket was unheard off. To see the casket go up in flames was absolutely crazy and everyone loved it.

The Kai-En Tai Run In:

The 2000 Rumble was the PPV that set the stage for the Rocky HHH Feud. It was held at Madison Square Garden and this match was notable for Taka Michinoku and Funaki coming out several times in the match and interfering, as they were angry they were not included. Taka took a nasty elimination at one point, receiving a concussion after his head smacked off the floor. The other main event was Cactus Jack taking on Triple H in a street fight. one of the greatest matches in my opinion.

The 1995 Royal Rumble was the year of Shawn Michaels. It was un heard of to win the Rumble at the number one spot but Shawn Michaels did it. This is the year “The Showstoppa” entered at number 1 and outlasted 29 other men. The final saw British Bulldog throw HBK over the top and celebrate as though he won. But, wait a minute. Only one of Shawn’s feet hit the floor. He got back in the ring and eliminated the Bulldog.

The 2004 Royal Rumble. A year that is obviously avoided by WWE for reasons. This year’s rumble was one of the greatest. The whole story was built on Chris Benoit against all odds. The match was pretty intense in which Benoit lasted over an hour and two minutes. The other main event was another great last man standing match between Triple H and Shawn Michaels which went to a no contest After Shawn moon saulted of the ropes onto the announce table.

The 2001 Royal Rumble was my favorite Rumble from the “Attitude Era” Simply because it started of as a normal match and once Al Snow entered all hell broke loses. Some notable things from this Rumble was the return of the Big Show, Drew Carry making a guest appearance and who can forget Kane’s record of 11 Eliminations. If you have not seen this rumble GO WATCH IT.

As always, if you have any comments, suggestions, or any wrestling discussions hit me up on twitter: @azansaigol and tell me your favorite rumbles!, come discuss wrestling!
Posted by WrestleFigsUK at 08:51