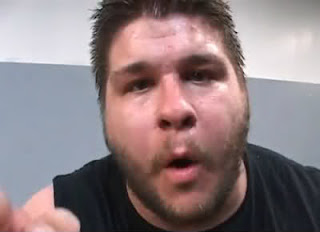 Above: Mr Walker's wrestler of the year: Kevin Steen

1st off, my apologies for not contributing to this site as much as I should have in the year of 2011, my new year’s resolution is to write more here more. 2nd, I can imagine some of you won’t like what I have to say. Now let’s get to it.
Actual Intro

2011 has been in all accounts a great year for wrestling for the smarks. It has been full of great talking points stemming from various good and bad angles, matches, storylines and promos and it is here that I will show to you, the loyal readers of wrestling’s last hope. En-fucking-joy

Wrestler of the Year

So many people deserve this award. The WWE have guys like CM Punk, R-Truth, Randy Orton, Cody Rhodes, Dolph Ziggler, Daniel Bryan and Alberto Del Rio. TNA have, Bobby Roode, James Storm and Crimson. The Independent Scene saw guys like El Generico, Eddie Edwards, Davey Richards, Chris Hero amongst a lot of others, but there is only one man that I can say has had the best year in the world of wrestling and it is Kevin Steen. Since the beginning of 2011 he has upped his in ring work, lost weight and has been in the biggest storyline in all of indy wrestling, without being in the actual promotion in 6 months and only wrestling one match in the company all year and that was a few weeks ago. He had carried this storyline in various promotions all across the US all year and now he has the most momentum in all of wrestling, going into 2012. All eyes on him. Honourable mention goes to Akira Tozawa, Mark Henry and Bully Ray.

Tag Team of the Year

Unfortunately, the WWE has neglected the tag team division in recent months and they have only just started to revitalise it, meaning that I am not taking that into account here. Sorry Air Boom. TNA’s best tag team have wrestled about under 5 times all year due to injury and the other decent tag team were split up to get singles pushes. So this is mainly down to independent tag teams. This year 3 tag teams have risen above the rest. Sorry Young Bucks and Bad Intentions, The Briscoes doing two double turns, cutting amazing promos and capturing more tag team gold have solidified them as my favourite tag team of the year

Show of the Year

Without a shadow of a doubt Steen Wolf presented by PWG was by far the show of the year. Every match was great, the last 3 were phenomenal. The crowd loved it from start to finish. And the return of Super Dragon was one of the best moments of wrestling PERIOD. The fact that a near 4 hour show had my attention from start to finish is a feat in itself.

PPV of the Year

Money in the Bank presented by the WWE. Great matches. Great commentary. Great moments that most people (I know I will) watching will remember. Fantastic PPV. Special mention goes to High Noon for pretty much the same reason.

Mark Out Moment of the Year

This does not go to the return of Super Dragon to PWG. This does not go to the return of The Rock to the WWE. This goes to Christian winning the World Heavyweight Title. This is because it gave off the feeling of a Lifetime achievement award. And whilst watching this I was transported 10 years prior to when I first saw Christian in the WWE. He was looked at as not to succeed and he did and it was a great sight to see.

Facepalm moment of the year

I really wanted to give this ‘award’ to Jeff Hardy’s ‘performance’ at Victory Road. But it has to CM Punk’s return from leaving the company. I mean come the fuck on. The moment they created at Money in the Bank was truly a once in a lifetime moment and the WWE went and took a big dump on it because they are about the almighty dollar. Also the utter burial of the WWE Championship in the following month as they had 4 champions in 4 weeks. Well done WWE. Well done.

Match of the Year

I wanted to give this to Steen vs Generico in a ladder match from Steen Wolf but I am giving it to John Cena vs CM Punk from Money in the Bank. Why? I am glad you asked. This match had perfect psychology, it was thoroughly entertaining and it had a perfect moment at the end. The crowd was into it the entire time and you can’t get that all the time with some matches that go that long which are not the Royal Rumble or a ladder match. Also the sheer unpredictability and the mark out moments were fantastic. 5 out of 5.

Commentator of the Year

I have two choices for this. The first of which was Excalibur. This man has the ‘don’t give a fuck’ mentality as he says whatever the fuck he wants to and will make his feelings known. His views then become your own as you love what he says. The second choice? Michael Cole. I don’t care what anybody says. When he buries people he is putting them over. Case in point Daniel Bryan. Half of his push was down to Michael Cole and he is a bigger star because of it. Same goes with The Miz. Sure some of the time he completely negates the matches going on but is that his fault. Let’s not forget who there is someone that is barking him orders through his headset. Honourable mention goes to Nigel McGuiness because he is a genius.

Heel Turn of the Year

Face Turn of the Year

Sheamus. He started this year as King Sheamus and I thought he was doomed. Eventually he returned to badass Celtic warrior and when he arrived in Smackdown he was caught up with a feud with Mark Henry and since then he is super over with the crowd. He is possibly 4th biggest face in the company and I see more world championships in this guy’s future.

So that was 2011 in my eyes. If you want to debate @AH_Walker is my Twitter. Also check out my podcast the PK and AH show, which can be found here. Peace NERDS. http://www.blogtalkradio.com/trendingtopics
Posted by WrestleFigsUK at 14:52