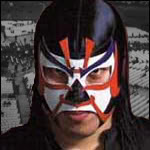 The orginal tournament was held by New Japan Pro Wrestling on 16/4/1994 as a one tournament which featured 14 wrestlers from a number of different promotions. Among the wrestlers that featured were Jushin Liger, Wild Pegasus (Chris Benoit), Great Sasuke (Pictured), Black Tiger (Eddy Guerrero), Hayabusa and Taka Michinoku. The tournament is widely seen as the best one night tournament ever seen and while that's open to debate, I would have to say that it comfortably sits in the top three. Pegasus and Sasuke both were lucky enough to receive byes into the last eight. Among the entertaining first round matches fans saw Liger defeat Hayabusa in a short but very exciting contest. MPW's Super Delfin outsmarting a very young Shinjiro Otani and Black Tiger sending Taka packing with a Tornado DDT.
Quarter finals saw Pegasus open his account against familiar face Black Tiger in a well constructed match, the disappointment of Gedo going over Super Delfin (I was a big fan of Delfin in the 1990's), Liger thankfully eliminating Ricky Fuji and the Great Sasuke putting his own marker down by defeating El Samurai. The semi finals is where the tournament really starts to take off which is how it should work in any event. Wild Pegasus ensured his place in the final in a keenly fought battle with Gedo. The second semi final took things to a completely different level as NJPW legend Liger faced Jap Lucha sensation Sasuke. This went well over 15 minutes and was clearly designed to make Great Sasuke come off as a major star and a viable draw and challenger in NJPW in the months that followed. Indeed it was the master of the Space Flying Tiger Drop that did advance by eliminating the home favourite Liger in a ****3/4 match. After seeing such a classic match between Liger and Sasuke few imagined that the final could come close to matching it nevermind surpassing it, but Pegasus and Sasuke did that and the final had great drama with the fans in attendance going absolutely mental as Pegasus finally managed to subdue the MPW representative.
Winner: Wild Pegasus
Breakout Star: Great Sasuke 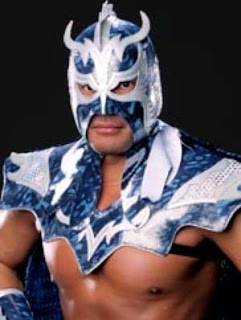 The second incarnation was presented by WAR and was held on 13/12/1995 and again was a one night tournament featuring 14 wrestlers from an array of different promotions. Featuring were Wild Pegasus trying to defend it, Jushin Liger, Ultimo Dragon (pictured), Lionheart (Chris Jericho) and Sho Funaki. Also appearing on the card but not in the tournament were Rey Mysterio Jr and Psicosis in an exhibition match. This time it Pegasus and Liger who benefitted from getting byes into round two. First round winners included Shinjro Otani winning by submission over Maasaki Mochizuki, Ultimo Dragon pinning Sho Funaki and Lionheart getting a victory over Hanzo Nakajima.
Quarter finals saw Jushin Liger advance by pinning the entertaining Gran Naniwa, Ultimo Dragon battling past a very determined Otani in a great match, not as amazing as their J Crown tournament match in August 1996 but a damn fine match. Gedo made his second consecutive semi final by defeating Mexico's Dos Caras and finally Wild Pegasus ended Lionheart's evening in the last match of the round. In the first semi final we had the dream match between Liger and Dragon which ended with Liger making his first final mainly due to the benefit of having only wrestled once before the semi final. Gedo shocked Wild Pegasus in the second semi final to ensure that the home promotion was represented in the final. Before the final took place we had exhibition match btween Rey and Psicosis and it completely stole the show with their high dives and lightning quick reversals which ended as their matches usually did with Rey Mysterio Jr getting the three count. In the final Jushin Liger managed to cement his reputation as the dominant junior heavyweight in Japan by pinning Gedo.
Winner: Jushin Liger
Breakout Star: Rey Mysterio Jr 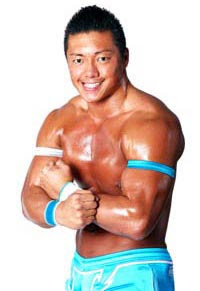 The third incarnation was hosted by MPW and it was the first time that the tournament was held over two nights (1/4/2000 and 9/4/2000) and featured 16 wrestlers. The first round took place on the first night with the remaining three rounds taking place on night two. Wrestlers appearing included Jushin Liger, Naoki Sano, Ricky Marvin, Great Sasuke and CIMA (Pictured). At this point it is clear that the quality of the Super Junior Cup is beginning to take a downward trend, the quality of wrestlers that appeared at this event you would have to say is not quite at the level of the previous years. Second match of the tournament ended in a DQ victory for Ricky Fuji over Sasuke the Great. Other winners included Liger, CIMA, Great Sasuke, Sano and Gran Hamada. Although the tournament cannot compare to the first two versions it is still a pretty fun show to sit down and watch. The highlights of the quarter finals were seeing the emergence of CIMA on a bigger stage and Liger's victory overs Mens Teioh. To no great surprise Liger made his second consecutive final by pinning the veteran Gran Hamada, the other semi final was a more intriguing prospect. CIMA vs. Naoki Sano, Sano was Liger's main rival in NJPW in 1989 and 1990 and the pair had many great matches including a few ***** matches. A Liger vs. Sano final would surely be fun for fans of nostalgia. A win for the brash and far younger CIMA would indicate the bookers were looking very much to the future. Happily it was CIMA who triumphed and made a date for the final against the legendary Liger. The only downside to the final and to a certain extent the whole tournament was that it was difficult to see anyone other than Jushin Liger winning it. And so it proved as NJPW's main man made it two wins in a row in a decent if not outstanding finale.
Winner: Jushin Liger
Breakout Star: CIMA 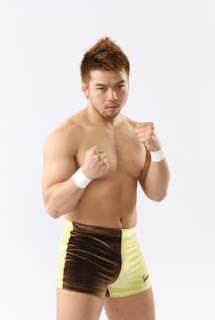 The fourth event was on 21/2/2004 and was hosted by Osaka Pro Wrestling and was a one night event featuring 8 wrestlers that included Noamichi Marufuji, OPW's own star Takehiro Murahama, Wataru Inoue and Jun Kasai among the field. If the event in 2000 indicated that the best days of the SJC were over in 1995 than this did little to change that view. With both Marufuji and Murahama in separate halves of the draw it was pretty obvious who we would see in the final. That being said don't be fooled into thinking that this wasn't an entertaing event and there wasn't any great wrestling on the card. As well as the tournament, the event also saw a 6 man tag which pitted KENTA (Pictured), CIMA and Heat vs. Liger, Delfin and Jinsei Shinzaki (wrestled as Hakushi in WWF in mid 1990's) and a pretty good tag title match which saw TAKA Michinoku and Shiryu challeging for the belts. What it does illustrate is that the SJC itself was not considered to be strong enough to draw without being supported by a couple of strong matches alongside. Marufuji went over in the final against Murahama in an excellent final.
Winner: Naomichi Marufuji
Breakout Star: Takehiro Murahama

That looked to be the end of the Super Junior Cup franchise, until Jushin Liger announced in November 2009 that we would see a fifth version that would take place over two nights on 22 & 23/12/2009 and the wrestlers would include Marufuji, Liger, Kota Ibushi, YAMATO, Koji Kanemoto, Prince Devitt among the 16 strong field. I will be reviewing this event for the site in a couple of weeks time and I'm excited to see if all the positive reviews are accurate, especially as the first round features a ***** classic.
Posted by WrestleFigsUK at 08:54