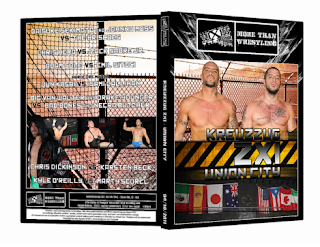 This was the second of two shows that the German promotion ran in New Jersey. Featuring stars from Europe, North America and Japan the show promised to be a damn fine entertaining show, but did it deliver?
Opening match was Kyle O'Reilly vs Marty Scurll, this is basically a continuation of the highly rated feud between O'Reilly & Adam Cole vs The LDRS (UK's Scurll & Zack Sabre Jr) which have wrestled two great matches. Scurll and O'Reilly are both fine wrestlers but seemed to be unable to connect with the fans on this particular night. Scurll also seems to have an issue working out if he's wrestling as a face or as a heel which is something that I noticed in other matches. Scurll was victorious on this night in a perfectly adequate opener **1/2
Up next was one half of the wXw tag champions Karsten Beck vs Chris Dickinson, Beck did a promo at the start of the match but unfortunately this was not picked up for sound. Dickinson is a local wrestler that the local fans were aware of. Majority of the match was Dickinson using his superior strength to dominate Beck, the match came to a premature ending when Dickinson seemed to blow out his knee when he missed a double stomp from the top. Unaware of what to do, Beck applied a armlock which Dickinson immediately tapped out to. Dickinson also apologised to the fans as the backstage crew helped him out of the ring. You had to feel for the poor guy *1/4
Tag team action followed with Necro Butcher & Bad Bones facing Drake Younger & Big Van Walter, Necro has aged about 10 years since 2009, he also unfortunately suffered a neck injury in an earlier match against Jun Kasai and frankly should not have been out there. What this meant was that Bad Bones would be playing babyface in peril, as the heels Younger & Walter are perfectly fine using standard heel tactics to keep Bones at a disadvantage while big German made the occasional comebacks. Necro get the hot tag but due to his injuries this didn't really work and it was only short time later that he fell to a big splash from Walter for the loss *3/4
I was looking forward to seeing Sam Callihan vs Jun Kasai, I heard great things regarding Callihan especially during the 16 Carat weekend where he one the tournament. Here I have to say he was a disappointment. Kasai with horribly scarred back is full of charisma who does a nice turn in comedy. Everything good about the match basically came from Kasai but it was Callihan who came away with the win by submission **1/4
The show so far is not making a positive impression, thankfully the second half was better the first. Adam Cole faced Emil Sitoci, this was similar in a lot of ways to the opener but just better in every way. The story was simple in that Sitoci kept outwrestling and embarrasing Cole to the point we had standard spanking spot where Cole complained to the ref that he's being violated. Sitoci laughingly say's he'll tone it down. When Cole does get control it's all very basic stuff that makes sense, with Sitoci doing his best Steamboat babyface comebacks every few moves. A corkscrew tombstone piledriver seemed to have given Sitoci the win but Cole impressively kicked out. A scorpion deathdrop later and it was Adam Cole who celebrated the win. This could easily have gone on another five minutes ***1/4
Semi main event is Chris Hero vs Zack Sabre Jr, this was a really good match. Chris Hero as been consistantly great over the last couple of years and Zack more than held his own here. The early part of the match was classic mat wrestling with numerous great reversals. The story here was that Sabre Jr kept catching Hero in a cross armbreaker but that Hero was always able to escape. Hero dominated most of the match but ran into trouble when he missed a roaring elbow and hit the ringpost. This allowed Zach to take over and now the fans were able to buy into his attempts to get to Hero to submit to the armbreaker. Hero though was able to win though when he switched from a roaring elbow to a roaring kick for the pinfall ****
Main event time wXw World Champion Daisuke Sekimoto & UK's Johnny Moss vs The Briscoe Brothers this was another really good match. For a lot of the match both Moss & Sekimoto were able to dominate both Briscoes but were dragged back by the Briscoes superior tag team wrestling which allowed them to get the heat on Moss for several minutes. The match though really came alive in the last five minutes as the power moves of Moss & Sekimoto began to really hit the mark. Among the highlights were Sekimoto hitting a German suplex on his own partner who was trying to hit the same move on a Briscoe. The fact he suplexed Moss seemed bizarre to me but the fans loved it, Moss hit a delightful rolling Northern Lights suplex on Mark in the highlight of the show which was followed by a delayed German suplex by Sekimoto for the win ***3/4
The final three matches ensure that the show ends up on a positive note and the final two matches are certainly well worth going out of your way to see.
Posted by WrestleFigsUK at 12:37