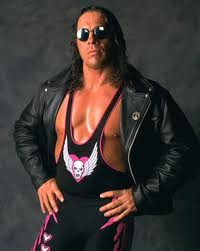 It's very easy to forget when you've watched the WWE provide pretty tedious and dull programming over the last couple of years that there was a time when the WWF TV was exciting and if you missed an episode of Raw the chances were you missed something that was pretty great. Arguably the most entertaining year of all was 1997, this was probably in part due to WCW winning the TV ratings war throughout the year and Vince spent the year playing catch up.
One of the main reasons why the WWF was so entertaining was Bret Hart, although always considered to be a great wrestler and deservedly so many were not convinced by his talking ability and also he was not seen as a guaranteed draw especially on PPV as the WWF champion. Pushed to the top of the card after the steroid scandal hit in the early 1990's and then helped tremendously in a career defining feud in 1993 against Jerry Lawler which made him a legitimate top babyface in the company. Still as the WWF were still trailing WCW in the ratings in 1997, Vince decided that he had to go back to his default plan which were to push the bigger wrestlers into the WWF title match at Wrestlemania. This gave us the not very thrilling Undertaker vs Sid main event.
Also in the earlier part of the year, Shawn Michaels' left the company temporarily when 'he lost his smile'. The result of this is that the booking of Wrestlemania had to have a number of major changes one of which was Bret Hart would face Steve Austin in the semi main event. Austin ever since winning the previous years King of the Ring tournament was becoming a bigger star by the month. He had a lost an excellent match to Hart at the 1996 Survivor Series PPV which did a lot to convince the company that Austin would be a firm fixture in the WWF main event ranks sooner rather than later.
As I mentioned in an earlier piece for the site, I consider Bret Hart's match against Austin at Wrestlemania 13 is the best Wrestlemania match so far. It deservedly took Match of the Year honours but more importantly it allowed the WWF to pull off a fantastic double turn, where Austin went babyface and Bret went heel. A few weeks later ECW tried to do a similar deal with Taz and Sabu at the Barely Legal PPV and even in front of the biggest ECW fan you couldn't say it came close to matching the Hart-Austin result.
By turning heel, this was Bret's first opportunity to be hated since the late 1980's when the Hart Foundation were under the guidance of Jimmy Hart. At that time Bret obviously wasn't the mouthpiece of the group, so this was his first real attempt to cut promos as the lead heel of the company. In a lot of ways he was the first heel to justify his position and his actions, this technique as since being used by Chris Jericho and CM Punk among others. Now joined by his brother Owen, Davey Boy, Jim Neidhart and Brian Pillman to form the new Hart Foundation. Although they were a fantastic group they lacked great talkers and this I'm sure would have put a lot of pressure on Bret. However Bret responded brilliantly and cut a number of memorable interviews, the key to this was that he argued that they hadn't changed at all and that it was the fans that had turned on them. With a special twist that made this period even better.
That twist was that in the United States the Hart Foundation were dastardly heels but everywhere elses they were booked like heroes defending themselves against the cocky Americans. The WWF ensured that a fair amount of their TV was filmed in Canada so perfectly illustrated the blurring of the traditional face/heel barrier. The highlight of 1997 and indeed Bret's highlight was the Canadian Stampede PPV where the Hart Foundation defeated Steve Austin, Legion of Doom, Ken Shamrock and Goldust in front of a rabid Canadian crowd.
In the run up to Summerslam, Shawn Michaels returned to the company and was assigned as special referee in Bret's world title match against the Undertaker in the main event. One superkick in error later and Shawn was forced to count to three and crown Bret the new WWF champion. Moving the Undertaker out of the title picture and with Steve Austin breaking his neck after an Owen Hart piledriver went awry this left DX versus the Hart Foundation as the main programme for the final part of the year. Sticking to the tried and tested anti-USA promos which were still working great, the first live WWF event I went to was One Night Only in Birmingham in September 1997 where Bret and Owen were beloved stars and hilariously the Patriot was booed unmercifully and he wasn't even wrestling a Hart.
We all know what happened at the Survivor Series in Montreal and considering that wrestling is fake I really could not understand why Bret would not drop the title to Shawn on his way out of the company. I guess that the mutual animosity and a failure to keep things into perspective forced an end result that did little to make anybody look good, although a by-product was that it launched the heel 'Mr McMahon' character which was a major reason why the WWF overtook WCW the following year. That being said if you ignore TV ratings or PPV buyrates and simply ask yourself the question of am I being entertained? Then if you saw a lot of the WWF TV in 1997 then I cannot imagine that you were not and arguably the main reason that fans really enjoyed that period was Bret Hart who gave us in my opinion his best ever year.
Posted by WrestleFigsUK at 14:34