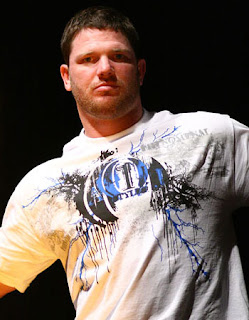 AJ Styles is without doubt the most successful wrestler in TNA history if you were to look at titles won. There isn't a title in TNA that he hasn't won and most of them he has won more than once. In fact he was the NWA/TNA World Heavyweight champion on four occasions and his last title run which ran from September 2009 to April 2010 was widely pushed as the longest title run in the company's history.
From a mainstream point of view he is considered to be TNA's most successful creation, a wrestler who as the ability to have great matches on a regular basis and with the benefit of having a crowd pleasing style which works well when he is a babyface and not so well when he is a heel. Stuart made his thoughts clear that he thinks that TNA are doing with Styles is frankly awful and that AJ deserves better.
When you look at the wrestlers ahead of him such as Mr Anderson, Sting, Rob Van Dam, Bully Ray, Matt Hardy, Jeff Jarrett and Kurt Angle a pattern emerges that gives a sign as to why AJ finds himself as a plucky mid-card babyface at the moment. All of the above talent were stars at one time or another at either the WWE or WCW and it seems clear to me that the general feeling within TNA is that if you were not a star in those companies then you will not be successful in driving the company forward.
Styles is an average promo guy and even when he had his last title run he still came off during interview segments as a fan who taken a title belt to the show. However the fact remains that when he is actually wrestling and he's given time for his matches then he's more likely than anyone to have a **** match. He's still in his early 30's so still as plenty of time left in his career now he's wrestling a more toned down style and so far he's resisted the temptation to go the WWE figuring that he would not be pushed beyond the Evan Bourne's of this world.
TNA have announced that at their next PPV they will re-create the best match in TNA's history which was the 3 way featuring Styles vs Samoa Joe vs Christopher Daniels from 2005. TNA have tried this tactic before by making that match the main event of the Turning Point PPV in 2009 which was a fine match and led to a Styles vs Daniels feud for the title. But despite the fact that the matches were good as soon as Hogan & Bischoff arrived on the scene then Daniels was taken out of the equation and Styles was soon replaced by 'bigger' name talent in the form of Jeff Hardy and RVD.
I fail to see what long-term benefit the three way match will have for Styles or indeed Joe or Daniels. Samoa Joe as been booked into oblivion when he's even appeared and surely now cannot be taken seriously as a major player in TNA. Daniels clearly does not enjoy the support of the TNA echeleon and will no doubt help to make the match really good and then disappear off TV and PPV's for the next few months. Styles himself won't be taking any more seriously if he wins or if he loses at the PPV. The only way he's going to reclaim his main event spot is if he's booked strongly over the talent that TNA see as bigger stars, more than that TNA should ensure that he is no longer seen as an underdog in his feuds. They should bill him as TNA's most successful wrestler, a guy who fans expect to win the big matches. They won't though because he isn't a former WWE or WCW superstar and there isn't anything he can do to change that, all he can hope for is that TNA change their mindset and I don't see that happening anytime soon.
Posted by WrestleFigsUK at 14:21