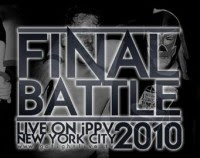 Watching wrestling and especially TNA can be a highly frustrating experience. You wouldn't say that watching a wrestling event that makes sense would be the highest of demands. But more often than not you get matches and angles that make absolutely no sense or stipulations that are never adhered to.
Final Battle 2010 PPV was a definite exception, this blog is not a review of the show as it's quite likely that a lot of you reading this will have watched the show. This blog will explain the simple steps that ROH took to ensure that their fans got value for money and no fans felt cheated. Look most PPV's the show was centred on only a few matches and Final Battle followed this with the show being sold on 3 specific matches.
Firstly El Generico vs Kevin Steen, this match was 12 months in the making since Steen attacked Generico after their loss at Final Battle 2010. Since then they had waged a vicious war that included Colt Cabana & Steve Corino but without a clear winner. The winner fittingly would come at the biggest ROH show of the year, this match was mainly sold on a key stipulation. If Steen lost then he would leave ROH but if Generico lost then he would lose his mask. This was a great stipulation because honestly it was difficult to imagine either happening but the strength of the build up ensured that one would have to happen. Looking at post Final Battle cards also gave little indication as to who would win. As we know now it was Steen who lost and so far he as yet to return to the group although Steve Corino recently teased a Steen return as his sponsor, but we had a stipulation that was upheld and that's a win.
Secondly we have Roderick Strong vs Davey Richards for the ROH World Title, this is based on what many ROH fans consider to be the best wrestler in the company (Richards) chasing the title. As a story that's one of the most simplist and most effective draws a wrestling company has. The match was also in the run up considered to be a sure fire great match and again this proved to be the case. The fact that Richards failed at the show does not stop his chase for the gold drawing again on iPPV as evidenced with Davey challenging again at 'The Best In The World 2011' iPPV later this month. The only point to query is if ROH are waiting too long for Davey to win the title.
The third match was the Briscoes vs Kings of Wrestling & Shane Hagadorn. The hook again is very straight forward, if you buy this show you will see Shane Hagadorn get his ass kicked by Papa Briscoe and that's it. You won't necessarily see a great match but Shane will get beaten up. The WWE for the last two Wrestlemania PPV's have had similar matches with finishes that you think they couldn't get wrong (Bret vs Vince and Lawler vs Cole) and yet they completely made a mess of it. ROH set up a very basic premise and delivered, job done.
The undercard's job is to provide a pretty entertaining 90 minutes with some good wrestling. The opener All Night Express vs Adam Cole & Kyle O'Reilly was a great start which went a long way to help the ANX as potential tag title challengers while showcasing Cole & O'Reilly. Cabana vs TJ Perkins was just a fun 10 minute match that had no other motives. The womens tag made clear that Haze (who needs a few good meals) and Del Rey are a worthy part of ROH. The Eddie Edwards vs Sonjay Dutt match although pretty good is purely designed so Kevin Kelly & Dave Prazak on commentary can push how great Edwards is and that he will be a major star in 2011 for the company and of course he's now the World Champion. Only the Christopher Daniels vs Homicide could be classed as a bit of disappointment but that match in truth was only a small part of the show and for those who bought the show they were sold by the three main matches and they all delivered exactly what you would have wanted and expected. In short a case of a show that had smart booking.
Posted by WrestleFigsUK at 10:17