TNA Getting Extreme: Not That Much of A Bad Thing By Stuart Rodgers 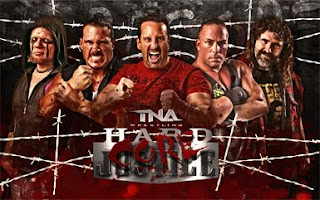 TNA this coming Sunday present Hard 'core' Justice. They have brought back the ECW stars of yesteryear and are making this PPV ECW themed. Most people from what I can see are against TNA going down the ECW route, they say ECW died in 2000, they say when WWE did One Night Stand, that was the re-birth of ECW but then the brand was murdered with WWE's lackluster TV program of ECW. WWE decided to cut ECW from it's programming and give us NXT. Some months on, TNA have decided to 'bring back' ECW.

ECW did die in 2001 and One Night Stand was a great show but what TNA is doing, isn't that much of a bad thing. TNA tried to go head to head on a Monday night with WWE, they failed misrabley. They have gone back to Thursday nights and the ratings are still poor. TNA cant seem to do anything right to get the viewers despite having some great workers. They brought in Hulk Hogan & Eric Bischoff in the hope this would turn things around but alas, it hasn't and some say they have made it even worse. My opinion is, that why shouldn't TNA try and go down this route, really, what have they got to lose? TNA wasn't able to bring Paul Heyman in but have they done the next best thing, brought in his right hand man from ECW the man that booked that One Night Stand show, Tommy Dreamer? Dreamer never the best wrestler but booked some good stuff in ECW and hand a hand in some aspects of WWE creative and booking. I am hoping Dreamer can help TNA be a success with this PPV and maybe afterwards. The ECW link has garnered TNA a lot of interest and this will probably be the company's best ever PPV buy rate. I for one really hope hard Justice is a big success both from a creative and finacial standpoint.
Posted by WrestleFigsUK at 10:29