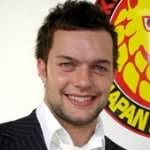 The prize for winning this tournament was a shot at IWGP Jr Champion Tiger Mask IV at the big January 2010 Dome show. Tournament opened with Tigers Mask who seems to do what can only be described as a drunk pirate gimmick as the heel against Taichi a would be high flying babyface. Tigers Mask pretty much controls the match with Taichi getting the odd quick comeback before Tigers cuts him off. Tigers Mask works on Taichi's arm to get the submission victory. Second up is Taguchi who on his video is described as a 'Funky Weapon' against the no-nonsense GENTARO. This was pretty basic but told a very good story, GENTARO basically takes most of the match and consistently works on Taguchi's leg with various kicks, submissions etc. Taguchi makes a number of comebacks which get thwarted by GENTARO going back to the leg. Taguchi's selling is fine and the match benefits greatly from it. Finally with the match coming upto the ten minute point Taguchi makes his big move and seals a spot in the quarter finals with a pinfall victory with the Dodon.
Dragon Gate's YAMATO as been one of my favourite wrestlers in the last 12 months, he is such a charasmatic heel who looks like he's having such fun in the ring. Here's hoping that he gets a good run in this tournament going against the veteran AKIRA still rocking the old red wig for his entrance. Fans were not sure who they should cheer for as both guys are naturally heels, YAMATO is in charge for most of this with AKIRA using dropkicks and the odd dive to keep YAMATO at bay. Just after 8 minutes though AKIRA's defence was breached and he was forced to tap out. DDT's Dino brought the comedy against the veteran Jado, for those who don't know Danshoku Dino does a very camp gay gimmick. He entered through the fans where he attempted to kiss a number of male fans, borrowed a woman's hat, kissed one of the commentators and snogged the ring announcer. Jado looked more than slightly confused at this. Match consisted of Jado chopping the hell out of Dino, hitting him with a chair and then hitting him with more chops. Dino got absolutely no offensive though he did manage to kiss the second commentator in a bid to get his second wind. Dino kicked out of a number of pin attempts and then used two kisses, pulled his trunks down to reveal a blue thong and trapped Jado with a Gedo clutch to advance to the quarter finals. Fans seemed to enjoy the comedy of this, in the next round he'll face either Devitt or Aoki.
DDT's second representative was the awesome Kota Ibushi against Gedo. This was a bit of a disappointment, Gedo gets to completely dominate Ibushi for the first 7 or 8 minutes. While I enjoy seeing Ibushi making his comebacks to me it didn't make sense for Gedo to have so much control. Ibushi should have at least dominated the early exchanges which would have improved things. Ibushi hit a moonsault from above the walkway entrance for a nice pop to start the comeback and the final five minutes were really good before Gedo used the clutch to pin Ibushi. Out of all the first round matches it was Ibushi's exit which was the most disappointing. The final three matches of round one were all very good and started with NJPW vs. NOAH. Devitt and Aoki had a fantastic hard hitting match, I haven't seen a lot of either man but heard a lot of positive reviews especially the Irish star Devitt. If anything Aoki looked even better though that's because it was Devitt that advanced to face Dino the second noght. Everything looked crisp and was wrestled at a quicker pace than anything so far on the show. Fans love seeing NJPW vs. NOAH and were delighted when it was their man that got the pinfall after nailing Aoki with the vertical drop DDT.
Match of the night was a battle between experience vs. youth as Kanemoto battled MPW's 'Jr' Hayato. If fans talk about stiff and matches wrestled at a lightning pace which adds rather than detracts from the match this is yet. Fought with great intensity all the way through this is a must see match. There was great spot where they kicking the hell out of one another on the floor and they go back to ring and stand on the apron taking a few seconds to catch their breath. They then turn see one another and then launch into a attack of blistering kicks and forearms. Was far better to see than I've described it. Ten minutes in Kanemoto catches his young rival with the ankle lock which looks for sure to be the end of the match but Hayato survives, Hayato's selling is awesome considering how young he is. Finish comes with Hayato trying to kick Kanemoto's head off but Koji manages to trap the leg and at the second attempt forces Hayato tap to the ankle lock. Final match of the night is a battle of former winners as Liger (winner in 1995 and 2000) taking on Marufuji (winner in 2004). Smartly they realised that they could not follow the previous encounter and wrestled a slower more thoughtful match. Fans love both these wrestlers anyway and it was an entertaining battle of brainbusters, kicks, dives and submission attempts. NOAH's Marufuji became the final man in the quarter finals after nailing Liger with the pole shift.
After every match they interview all the wrestlers with the only exceptions been Taichi and Prince Devitt which is a shame as Devitt would have been the only wrestler who I would have been able to follow what he was saying. Part one ended with a music video showing the highlights of round one.