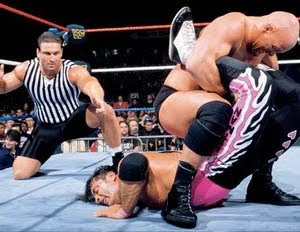 Seven weeks in the making. That's how long Detroit Pro Wrestling Examiner Wes Sims and I have been doing this countdown - the greatest WrestleMania matches in the history of the event. It all comes down to this - the top five. Be sure to check for Wes' article tonight or tomorrow. Before we start, let me tell you that on both of our lists, Wes and I had #1-4 completely identical. So in our minds, there's really no debate. What do you think? Leave a comment below. Now, on to the countdown.

Many call this the greatest ladder match of all time. I would have to disagree, however, there is no denying the excellence of this match. When people look back at revolutionary pro wrestling matches, they will look at this one as it ushered in a new era of how the sport was done. Wrestling told a brilliant story, and this match showed that in could be told in ways other than just on the mat. This match proved that. What Shawn Michaels and Razor Ramon did that night in New York will always been looked at as one of the most important matches in history. There is an undeniable reason that after 15 years, it is still shown at the beginning of every WWE show. This match is superb. In this humble person's opinion though, their second ladder match at SummerSlam 1995 is just as good, if not better. If the ending wasn't botched, it would absolutely overshadow its predecessor.

Something special was in the air during the 20th incarnation of WrestleMania. You could tell that something was going to happen that you would remember for the rest of your life. That happened in the main event of the evening. Not only was 15-20 years of hard work by Benoit finally rewarded with the biggest title in WWE, but the match he won it in was one for the ages. It was a perfectly executed professional wrestling contest. Triple H and Shawn Michaels bled buckets. Benoit was driven through an announce table. Michaels moonsaulted off the top rope to the outside. I remember watching the match and thinking, there's no way Benoit could win...then Triple H tapped out. It was an extraordinary moment for pro wrestling.

There are few wrestling matches that are better technical contests than this match. These two men went out and absolutely stood out on one of the weaker WrestleManias. Kurt Angle and Shawn Michaels are two of the absolute greatest wrestlers the sport has ever seen. They will probably go down as two of the top ten after all is said and done. People dreamed of this match for so long, and when they got it, there's no way any of them could have been disappointed. The match was a technical masterpiece. Many people say that WWE has "lost it" when it comes to putting on great matches and that people need to look to Indies to see good wrestling. I don't know how they can say that knowing this match is out there. This contest is nearly perfect. As Shawn was laying there agonizing in pain, but was too proud to tap out. It was just a great, great wrestling match.

What else can I say about this match that you haven't heard in the build up on TV these past few weeks? Watching this match was really like watching the two greatest WWE has ever seen locking up and putting on the best performance of either of their lives. Ever since we watched these two men wrestle for 10 minutes at the end of Royal Rumble 2007, most wrestling fans had been dreaming of the one-on-one contest. Once they locked up, they never disappointed. From the build of the match, you knew it would be special - something to tell all your friends about. From the entrances, to the false finishes in the middle of the match, to the terrifying dive Undertaker took, to the amazing Tombstone that Shawn Michaels kicked out of, to the Superkicks, and finally the outstanding ending, this match truly was phenomenal. Last year on Rumble Radio's Mania of Wrestling special, I am on record as saying that this match was one of the most important of the decade and would be the greatest WrestleMania match of all time. I was so very, very close...

What else can I say? It's probably the best professional wrestling match I've ever seen, and I have seen an awful lot. The story that was told in this match may never be replicated again on as grand a stage as it was here. Bret went in as the babyface. Austin went in as the heel. The match ended with the two roles reversed in an act of brilliant execution. These two guys beat the hell out of each other for over twenty minutes and it was the blood that changed everything. You know, the most famous bleeding in the history of wrestling? The camera angles that shot Austin struggling to get out of the Sharpshooter were spectacular. It had you on the edge of your seat just pleading for him to get out. This match is quite simply the best match in WrestleMania history and absolutely deserving of this number one spot.

So there you have it folks. What do you think of the countdown? This Sunday night is WrestleMania ladies and gentlemen. I'll be back later tonight or tomorrow with full predictions and a run down of the entire weekend's festivities.
Posted by WrestleFigsUK at 20:00