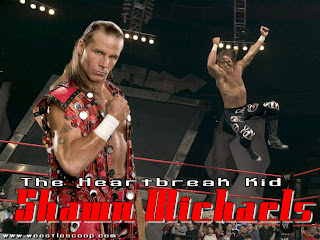 I have just sat through WWE RAW the night after Wrestle Mania XXVI. All night they were showing clips of Michaels' career that of course ended the night before at the hands of the Undertaker the night before. All throughout the show, they building the 'farewell' up and when it came Michaels gave the usual spiel thanking ths person and that person, the guys in the truck, the camera men and the announcers with a mention to Jim Ross who wasn't at ringside which was a good gesture. But I feel it was very underwhelming, I know Michaels is no Ric Flair but if you think back to Flair's farewell, they really 'rolled out the red carpet' for the 'Nature Boy' that night and yet Michaels' farewell was very mediocre in comparison. The only person who really came out and showed their appreciation for Michaels was Triple H which was no suprise really but this was only when Michaels was at the top of the ramp on his way to the back.

I don't know what everyone else thinks about these but please feel free to leave your comments.
Posted by WrestleFigsUK at 01:32