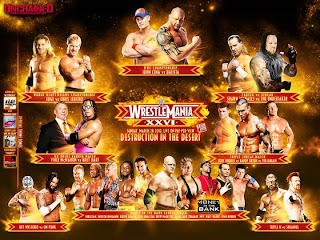 The time has come for the biggest show of the wrestling year - WrestleMania. This year, the matches lined up have the potential to make this one of, if not the best WrestleMania in history. The build up, the reason most are buying this PPV centers on one match - a match that, no matter the outcome, will change wrestling history forever. Let's get to the card...

Most people are writing this off as a match where both men aren't very good wrestlers. Most people forget easily. When these two fought at SummerSlam 2008, the match they had far exceeded any expectations. This match will be good ladies and gentlemen. Don't expect a technical masterpiece, but Batista and Cena will go out and make this a very fun match. When it comes to the uild up of this match, Batista has been brilliant, Cena's been OK. The transformation on the mic that Batista has had since turning heel is outstanding. He has carried this feud on his back in a big way. For someone whose character got really stale, he's found a new life in WWE. I see this match being a very good match that people will be surprised at following the show. However, when it comes to the big dance, few people have gotten more moments with the title than John Cena. Easy money's on him.

Money In The Bank Ladder Match - Evan Bourne vs. Kofi Kingston vs. Shelton Benjamin vs. Kane vs. Drew McIntyre vs. Dolph Ziggler vs. Jack Swagger vs. Christian vs. Matt Hardy vs. MVP

Let me begin this by saying that I think 10 men in this match is too many. Now that I've gotten that out of the way, let's try and figure out a winner. The guys that can be immediately scratched off are Kane, Matt Hardy, and Evan Bourne. There's no way those guys have a chance at winning. Now, let's look at the three guys who are most likely to win: Christian, Drew McIntyre, and Kofi Kingston. The match boils down to those three guys and it's kinda hard to pick a winner out of them. Many people think it's Christian, but he doesn't need the briefcase - it should be used to catapult someone into the main event scene. That's why I'm going with Drew McIntyre. It really seems as if he's being groomed to be the top guy in 2010. Also, as a side bet at your WrestleMania party, pick who will do the most insane dive. My money's on Evan Bourne.

The challengers in this match were, by all wrestling fans' logic, were supposed to be in MITB. But WWE did a pretty good job of swerving us and keeping them out of it. Miz and Morrison have a history and had a great match on Monday night. It should be interesting to see how Big Show works with the two high flyers. I think the only way to have this match end is by having Show knock out Morrison or Truth. The winners of this match will be ShowMiz.

Backstage, these two are supposed to be very good friends. We're pretty sure that's why Sheamus won the WWE Title. This is also the first time Triple H has not been involved in a title match at WrestleMania since 2001. That's a pretty long streak. While I think this could be the upset of the night, I'm not sure if Triple H is ready to let someone go over him at WrestleMania. At next month's show, I can definitely see Sheamus winning...but not on Sunday. Triple H gets the win with the Pedigree.

I'm going to hope that this is a dark match and that I don't have to watch it on my TV. I don't care who wins this, but I'll guess Good Divas.

I almost wrote an entire article on this match alone, but decided not to. There is not a match on the card I care less about than this one. Seriously folks, this could have been one of the most important matches on the card as they have been building it for almost a year. But WWE really screwed the pooch on this one. No matter how many wins they get over him, not many are convinced that Rhodes or DiBiase will be given the win at WrestleMania. I think this match will be a good one, but the build up has been so disappointing, this could very well be the "bathroom" match on the card. Orton gets the win.

After Monday's Raw, I am very, very interested to see this match. Bret and Vince cut great promos and I'm wondering what Vince has up his sleeve for this one. However, I think this match is going to disappoint a lot of people. I think people are expecting a feel good moment for Bret Hart returning after so long. I have a feeling that it's going to be more of a sad display of two older men that cannot wrestle. I see a lot of plunder being used to make up for the lack of skill. Maybe a surprise return? Who knows? The one guarantee is that Bret Hart will make Vince McMahon submit to the Sharpshooter which, regardless of the content of the match, is what everyone in the WWE Universe has been waiting to see for twelve years.

If Rey loses, he must join the Straight Edge Society - Rey Mysterio vs. CM Punk

For a year, whenever CM Punk was asked who he wanted to face at WrestleMania, his answer has always been "Rey Mysterio." There's a reason for that - these two will go out and steal the show on the undercard. The match these two put on will be outstanding, there's no doubt on that one. This has also had the best build-up in terms of mic work of any match on the card. People really, really want to see Punk gets his butt kicked after watching him demean Rey in front of his family and ruin Rey's daughter's birthday party. Punk has been a brilliant heel in this program. Expect an outstanding match and expect CM Punk to get the win to give birth to the angle of the summer and the front runner for Feud of the Year.

My two favorite wrestlers of all time in a main event spot at WrestleMania. Suffice to say, I'm very, very excited for this match. This will be the far superior wrestling match of the two title matches and this is my pick for what match closes the show. This match would be the best build-up on the show if Edge hadn't gotten hurt as it would absolutely have had a long drawn out reign as tag champs. This match will be a great technical pro wrestling match, and will probably enter my top ten WrestleMania matches of all time rather quickly. Expect the match to be built around the Spear and whether or not Jericho has the move scouted enough to reverse or dodge it. Regardless of Jericho's ability to reverse or dodge it, Edge will hit the Spear and become the new World Heavyweight Champion.

Match must end in Pinfall or Submission - The Streak vs. The Career - The Undertaker vs. Shawn Michaels

No matter its placement on the card, this is the most important match at WrestleMania XXVI. As said, no matter who wins, wrestling history will change on Sunday night. Either the greatest accomplishment in the history of the business - Undertaker's undefeated streak at WrestleMania - will end or the career of one of the greatest wrestler's in the history of the business will end. I'm so torn on what should happen in this match. Quite frankly, the result may be secondary. Many people wonder if this can top last year's masterpiece. I think it will. Both men know the magnitude of this match and they will not let anyone - fans, wrestlers, and everyone else in between - down. Be prepared to see one of the best matches you will ever see. And in my opinion, be prepared to watch Shawn Michaels end the Streak.
Posted by WrestleFigsUK at 12:51