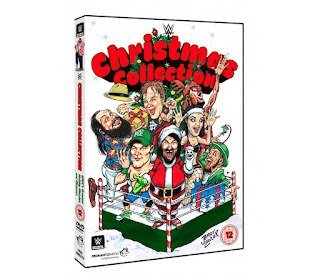 WWE latest in its range of low priced, stocking filler DVDs is the perfect gift for wrestling fans at Christmas.

Presented by Mick Foley, and his daughter, Noelle, the programme itself is called “Ring in the Holidays” and gives us almost three hours of WWE Christmas-themed action from Santa’s Village as they go on a search for Santa.

Interspersed between Foley’s quirky humour, we see a collection of Christmas themed matches, all guaranteed to either raise an eyebrow or raise a smile.  WWE’s Christmas offerings has regularly thrown aside the seriousness of its product, much to the delight of the audience - watching US troops gathering to support Santa is still a wonderful experience - and we get a good representation of that silliness here - No Ho-ho-ho-holds Barred, boiler room brawls, Tajiri and Bubba Claus, Christmas Present on a Pole - the list goes on and it’s all for pure entertainment.

None of the matches will be considered the greatest of all time, but they are all wonderfully entertaining and it’s good to see WWE put such effort into their budget range.  Most of the matches come from the post-2011 WWE and many of the names will be familiar to even the newest WWE fans. It takes us up to Christmas 2014, with Dean Ambrose vs Bray Wyatt, but also includes a couple of older matches - Xanta Klaus, anyone?

Foley, has he has proved over the years, is a charismatic host and narrator and it doesn’t stop with WWE Christmas Collection.  The DVD would have been worth buying for the sheer number of matches, but Foley is the icing on the Christmas cake.
Posted by WrestleFigsUK at 05:41