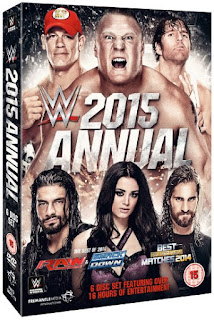 Best Of Raw & SmackDown 2014 & Best Of Pay Per View Matches 2014
WWE's 2014 was probably a lot more eventful than you remember. I wouldn't have said off the top of my head that 2014 was a particularly memorable year for the sports-entertainment juggernaut, but looking back over this bumper 6 disc set, which gives a good overview of the complete year, there was more good output than I remembered. There is also a lot of average output to fill up some room, but much like the TV and PPV output from month to month, they are trying to appeal to a broad spectrum of fans and there are points of interest for some people which will not necessarily appeal to everyone.
The collection is split into two sets of three discs each; 'The Best of Raw & SmackDown' and 'Best PPV Matches'. The TV part of the set is hosted by Byron Saxton (who does his best to navigate through some of the tenuous segues that he is given) and features bonus footage of fan reactions and analysis on some of the matches and performers which, although kayfabe, is usually interesting and adds a bit of context to the action.
Starting on the wrong foot, the Best Of Raw and SmackDown opens with a six man tag match pitting John Cena, Daniel Bryan and Sheamus against The Shield which, while decent, is also forgettable and formulaic. The interference at the end of the match means that it ends in a DQ, which begs the question as to why this was deemed good enough to be included on a 'Best Of' collection. Daniel Bryan vs Randy Orton is a much better bout; enjoyable action with a good pace and build of drama and suspense - a generally better example of what type of thing belongs on a disc labelled 'Best Of'. The first SmackDown offering is a fatal four way match pitting Rey Mysterio, Mark Henry, Kofi Kingston and Jack Swagger against each other for number one contendership of the IC title, which is better than it sounds on paper. The eclectic talents on display make for an enjoyable mix of action and they maintain a good pace throughout. The match between John Cena and Cesaro from Raw is brilliant and is definitely one of the more memorable matches from Raw in 2014. It leaves me with somewhat mixed emotions as this was from one of the times that Cesaro was getting a good push up the card, which was inevitably stopped and quashed without any payoff or apparent reason. Even so, despite that context, the match is excellent and well worth checking out. It's extremely hard to watch the crowd reactions and believe that Vince McMahon said that Cesaro can't connect with the WWE audience. After the match there is some bonus footage where fans give their perspective on Cesaro's performance and sing his praises, which brings that point home even more. Batista vs Dolph Ziggler from SmackDown is surprisingly good, although the lengthy promo segment before it could have been edited without losing any value. The New Age Outlaws against the Usos is a strong and emotional outing for the tag team titles and Luke Harper makes a good showing of himself in a singles match with Cena, while the visible and audible crowd reactions  for both matches demonstrate that WWE are still capable of whipping their fans into an excited frenzy. Paige's debut against AJ Lee on the Raw after WrestleMania is a sensible inclusion as the most memorable TV moment of the year for the Divas division, whereas the SmackDown debut of Bo Dallas is underwhelming and is another reminder of mishandled talent being lost in the shuffle later down the line. The best part of this was the fan comments included before the match itself on the disc. Bray Wyatt vs Chris Jericho in a Cage match and Randy Orton vs Seth Rollins from Raw are two of the highlights of the Raw and SmackDown portion of the set, while a triple threat elimination match from Smackdown in the UK featuring Ziggler, Cesaro and Tyson Kidd is a refreshingly good showcase of some of WWE's most talented in-ring performers.

The break-up of the Shield is one of the few non-match segments that deserves to have been included on the disc as it is well executed and the historical significance of this moment will make it something that will no doubt be revisited, dissected and celebrated for years to come. The story unfolds quite well in the included content across discs two and three, including promos and an excellent Falls Count Anywhere bout between Rollins and Ambrose. The promo between Cena and Bray Wyatt (with an ominous choir of children singing 'He's Got The Whole World In His Hands') is well executed, entertaining and different, making it a good inclusion on the set, and the Wyatts are represented quite well in general throughout. The other TV segments, such as the contract signing between Undertaker and Brock Lesnar and Daniel Bryan's 'Occupy Raw' segment are good accompaniments to the Best Of PPV discs, but are largely useless on their own and could have been substituted for more matches to showcase some of the good quality bouts from some of the lesser celebrated but talented workers on the roster. The same can be said for the US title Battle Royal, the SmackDown 15 man tag match and the promo segment between Rusev and The Rock, as they are far from the best representations of the company's output. A title change with no build, a clusterfuck of underutilised mid-carders trying to squeeze their spots into an overpopulated match and a segment where a guest star makes the regular talent look stupid and weak are symptomatic of a company who is out of touch with the purpose and direction of their product. Regardless, these were deemed to be suitable for inclusion in their best moments of 2014. That being said, this part of the set does include more good than bad and the matches on offer are generally well selected.
Starting off the Best Of Pay-Per-View discs is the Royal Rumble match between Daniel Bryan and Bray Wyatt which is a great back and forth battle between two of the best all-round performers on the roster. Mixing brutality with technicality, the two demonstrate great storytelling and psychology in a great opener to this part of the collection. The Wyatt Family vs The Shield is also a brutal  and exciting war between the two most memorable and successful factions of the last decade, serving as an exhibition of the differing talents on both sides. Both of these are matches which most fans will want to watch over and over again. I have to admit that I am a sucker for gimmicks like the Elimination Chamber, so the inclusion of the 2014 Chamber match is definitely a plus point for me.

A diverse mix of styles, some creative exchanges and the expected barbarity that comes hand in hand with the eponymous structure make this a rounded and exciting match. One of the unquestionable highlights of the set is Daniel Bryan's double header performance to open and close WrestleMania 30, in excellent performances with Triple H and then with Randy Orton and Batista to create the most emotional moment of the year. The Wee-L-C match between El Torito and Hornswaggle has some genuinely good action and is a credit to both performers. Unfortunately the way the action is called by the combination of the regular announce team and a set of miniature dress-alikes is derrogatory and only demeans and distracts from the efforts of the two and is pretty shocking for a company who are so outspoken about their anti-bullying policies. Wade Barrett vs Big E Langston for the IC title is watchable but average, especially compared to the later bout from the same PPV where Evolution battle The Shield, which is another major highlight of the collection. Cesaro vs Sheamus is a great outing from both and leaves you wanting more, while the Last Man Standing match which follows it between Bray Wyatt and John Cena is a masterclass in creating a chaotic tour de force with some excellent spots and a creative finish. Seth Rollins' Money In The Bank win is another great match which is worthy of inclusion, with all the trademark jaw dropping moments we have come to expect from these types of matches.
Paige vs AJ Lee from SummerSlam is more of an actual match than Paige's debut on Raw, and is one of the better women's matches in recent memory at that time. Rusev vs Jack Swagger in a Flag Match on the same PPV is a strong match for both and the Lumberjack match from later that same show between Rollins and Ambose is an exciting brawl, although it begs the question as to why the stipulation was chosen when the action unfolded in the way it did.
Other bouts such as Orton vs Jericho and the Usos battles with the Wyatts and then Goldust and Stardust are also among the highlights of these discs, ganering genuine emotion from the audience and beautifully building the drama and suspense to satisfying, decisive conclusions. A battle royal from the Battle Ground PPV (again for the IC title) is just filler and harks back to my comments about the similar offering from Raw in this collection being a title change without a storyline or build-up and a pointless addition to the disc. Cesaro vs Ziggler is excellent and the final chapter in the saga between John Cena and Brock Lesnar is a no-brainer to include in the set. The Hell In A Cell match between Cena and Orton to finish the set is a match that you think you have seen to death already, but is more enjoyable and varied than you may expect.
One conclusion that I can draw from the set is that 2014 was the year of the Wyatt Family, showing dominance over some of the biggest names in the business and putting on some excellent matches along the way with an assortment of stars. This makes the set a must-own title for any fans of WWE's most charismatic heels, as it perfectly illustrates every aspect of their rise to prominence in the sports-entertainment landscape as a team and separately. There is plenty of other great action on offer too, so it's not just worthwhile for Wyatt Family loyalists. The final chapter of the Shield and their transition into solo roles is well represented and the performances of Daniel Bryan, Cesaro and Dolph Ziggler provide some incredible action. There is plenty included here to make this worth adding to your collection, although the SummerSlam diomination of Cena by Brock Lesnar is notably absent from the set, which I feel would have been more suitable than some of the other choices, but there seem to be few other notable exemptions.
You can buy this great DVD (or Blu Ray set) from http://wwedvd.co.uk
Posted by WrestleFigsUK at 07:37