Sting - Into The Light DVD Review By Nathan Hunt 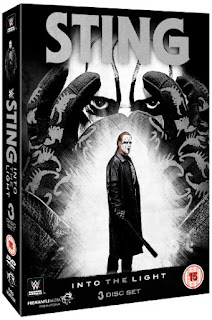 WWE's new Sting DVD is basically what fans had hoped that the first would have been. While WWE's Best Of Sting box set was still a must-own release in it's own right, this one offers not only matches and promos, but a feature length documentary (75mins approx) which comprehensively covers the different stages of one of the most iconic, eclectic and celebrated careers in professional wrestling. Jam-packed with some fantastic extras and good insights, this is not only a must-see for fans of Sting, but for any wrestling fan.


The documentary uses a 'day-in-the-life' style framework, showing Sting travelling to WWE Headquarters in Stamford, meeting with officials including Triple H and Vince McMahon (although the Vince meeting is off-camera), getting ready for his first WWE appearance at Survivor Series and first WWE match at WrestleMania 31. This framing device forms a foundation from which the body of the documentary spirals out into the usual retrospective of Sting's incredibly rich life and career. Considering how much has been said and written about Sting throughout the years, this was a good choice in presentational style as it allows the disc to cover all the usual ground but with additional insight and a contextual basis which emphasises the importance of his finally signing with WWE. The well chosen and wholly appropriate talking heads include Ric Flair, Lex Luger, Jim Ross, Jerry Jarrett, Rick Steiner and Eric Bischoff.
Sting is candid when discussing topics such as his shortcomings in his early career, his views on championships and match styles, past negotiations with WCW and WWF and his dealings with other talents. He discusses the origins of the Crow-style character he morphed into in the late 1990's and the circumstances around the famous Starrcade '97 match against Hulk Hogan. While his time in TNA is glanced over, he surprisingly mentions them by name. While there is too much coverage on his personal spiritual beliefs, which are completely irrelevant, it does add a little insight into the man behind the paint and some of the other detail on his upbringing, training regimen and personal life is fairly interesting. Sting is always humble and is quick to give credit to others he has worked with or helped him in various ways. He admits that he never watches his own matches and it is really good to see him watch some footage back and genuinely enjoy  and take pride in seeing his old work (particularly when watching his match with Flair from the final episode of WCW Nitro, when the heartfelt pride is especially evident).
Extras include some documentary excerpts which add some further insight into Sting's career as well as some good stories from his life in the business and on the road. While some early offerings of the Bladerunners are only included as points of interest rather than classic wrestling matches, the bouts included here with Ric Flair, The Great Muta Cactus Jack, Rick Rude and the Steiner Brothers are all fantastic and well worth watching and revisiting, standing up as outstanding matches even nearly 30 years later.
Overall this is everything you may expect from a Sting DVD, plus a whole lot more. The extensive resources and wealth of material WWE have at their disposal has been put to good use in the creation of this release and I cannot imagine that any wrestling fan would be disappointed by this. Definitely one you will be reaching for again and again, this is highly recommended, genuinely enjoyable and a great addition to any collection.