In The Midst Of A Wrestling Renaissance By Abby Maldonado 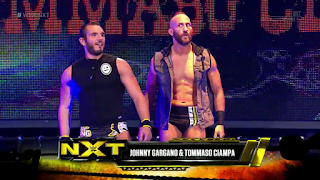 I was fortunate enough to attend the EVOLVE 49 show in Queens, NY on October, 17, 2015. Seeing Sami Zayn back in that environment, while under a WWE contract, was one of those surreal moments in Pro Wrestling that really doesn’t happen too often anymore. Another was the eruption of the crowd when HHH’s music hit, only to be fooled by the entrance of All Ego Ethan Page. And for that single solitary moment, people believed.

The landscape of professional wrestling has changed. Vince McMahon is changing his view of how to handle the sports entertainment industry outside of his domain. When McMahon went national in the 80’s, he basically tried to eliminate every territory in the country, or most of them anyway. But with declining ratings, the success NXT has become without the help of John Cena and the rising commodity of independent wrestlers on the market, I think McMahon finally sees the ability to do business with minimal investment while appealing to the most hardcore fans. Samoa Joe was the first example of this. An independent wrestler, keeping his name, his trademark, his character, and keeping an independent schedule while on the WWE network is something that no one ever dreamt would be possible. And now with Johnny Gargano and Tommaso Ciampa having similar arrangements, I believe it’s only a matter of time before this becomes the norm for blue chip prospects on the independent scene.

If we try to recall history, in a modern day representation of wrestling territories, Pro Wrestling Guerilla would become the Southwest Territory feeding a star every year to the WWE system in a Hunger Games sort of tribute with the winner of its annual Battle Of Los Angeles. Five Borough Wrestling and Beyond Wrestling would become rivaling Northeast brands, invading one another with talent and promotional feuds, but stay far enough away from each other not to affect their respective businesses. Smash Wrestling maintains its independence on the Canadian circuit. NXT will have a lock on the Florida territory, while EVOLVE grows to be another nationwide touring group. There are far more companies that could play a part in this entire situation. There are too many of them to name. But idealistically, this fantasy would culminate annually at an event where all Regional/Independent Champions defend their respective titles, cross lines and continue to tell a story…

Independent promoters can uniquely boast first time match up’s with the bountiful roster of independent wrestlers and grass roots talent. And while there are very few matchups left for us to crave at the top of the food chain, with the few exceptions being Samoa Joe, Kevin Owens, Seth Rollins and Cesaro, there isn’t much left for us to want on top. The new wrestling fans want to see their champions grow from the independent scene, all the way to the main WWE roster. Vince McMahon is finally coming around to understanding there is an entire market out there for the taking, if promoted correctly. And luckily for fans, that same environment is impervious to bad booking.

Thanks for reading. And thanks to Stu Rodgers for the invite to write for Wrestling's Last Hope.
- @AbbyTheButcher
Posted by WrestleFigsUK at 15:11