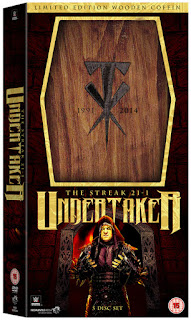 Recapping the epic Wrestle Mania streak of The Undertaker, The Streak 21-1 takes us through The Phenom’s many Mania matches, before ending with the one that ended it all.

A five disc DVD set that shows the evolution of The Undertaker from his first Wrestle Mania in 1991, with his match against Superfly Jimmy Snuka, it wouldn’t be until Wrestle Mania XII that his matches would go over 15 minutes, as he faced Diesel, whilst his matches after Wrestle Mania XXIV go to close to 25 minutes or longer.

This DVD set doesn’t just chronicle The Undertaker, it chronicles the evolution of the WWF into the WWE, the reverence with which The Dead Man is held by the fans and the way that, over two decades WWF/E commentary has changed - from the early days of The Streak with Bobby Heenan and Gorilla Monsoon setting to the standard for exciting, confrontational commentary, to the peerless storytelling of Jim Ross and his broadcast colleagues, to what we hear today.

Though, in between matches with greats like Jake 'The Snake' Roberts, Diesel, Triple H and Shawn Michaels, we see a small number of matches that would be best forgotten - Giant Gonzalez in the only DQ victory and Big Boss Man amongst them.

A true wrestling icon, with one of the most spectacular themes in wrestling history and an entrance that is as memorable as anything he does in the ring, it’s impossible not to get blown away by the entrances for WM XXV, emotional as The Undertaker faces Shawn Michaels at Wrestle Mania XXVI and referees the match at WMXXVIII, or being on the edge of your seat as Triple H faces him at WMXXVII and it’s at this point that you start to question whether his best matches were in the later years as he proved, time and again, that he is a man who pushes himself to physical extremes, raising the bar with each event.

This isn’t to take away from earlier matches - he faced future Hall of Famers and legends of wrestling - Ric Flair, Diesel, Jake Roberts and a much younger Triple H would all fall victim to The Streak - and the fans were delighted with each victory as he left a wake of destruction and the tally rose year on year.  The emotion is there as the fans were truly behind The Undertaker, gripped by his presence and enthralled by his every move.

More than twenty years of dominance, his loss to Brock Lesnar may have sent shockwaves through the WWE Universe, but has done nothing to diminish the legacy of The Undertaker or The Streak.

The video footage shows just how fantastic the WWF always were - full frame or widescreen, the camerawork is second-to-none, the commentary and sound are well balanced and engaging, whilst the quality of the footage is still exceptional.  Some wide angle shots suffer from a degradation in quality (especially in crowd shots) due to the DVD format, but the action in the ring still looks fantastic whether it’s early 90s or early 2010's.

Whilst this five disc set may not have any extra features, behind the scenes footage or commentary, it is a testament to one of the most impressive men in WWE’s history and his ability, over more than two decades, to entertain.  A must have for WWE fans and wrestling history enthusiasts, The Undertaker: The Streak - 21-1: The RIP Edition, to give it it's full name should be on everyone’s Christmas list.
Posted by WrestleFigsUK at 06:50