WWE Over The Limit Review By Dave Meltzer 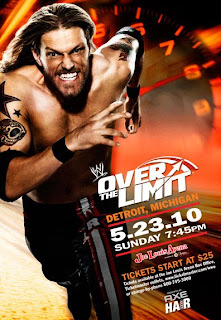 This review was taken from www.wrestlingobserver.com

Drew McIntyre vs. Kofi Kingston for the IC title.

Kind of a surprise, as Kingston won the IC title clean with the SOS which is like a combined Code Red and outside cradle, reversing out of the double-arm DDT. Short match. Decent at best. McIntyre showed nothing in this match. McIntyre said the PPV is going to stop until Teddy Long reverses the decision and gives him back the title. Teddy Long came out in a Matt Hardy costume and to Matt Hardy's music. Hardy then laid him out with the twist of fate. Wow, McIntyre is totally in the dog house to not just lose his title, but then get laid out by Matt Hardy. It's hilarious. McIntyre has a cut right elbow and the cameras wouldn't shoot wide enough to see his elbow.

In a surprise, Truth won clean in the middle with his flying corkcrew clothesline in another quick match. They pushed that this was a big win for R-Truth. Matt Striker claimed this was a victory for the common man. Lawler got pissed at him saying it.

Drew McIntyre demanded the result of that match be overturned. Teddy Long said no. Drew demanded also that Matt Hardy be fired. He wouldn't do that. Drew was throwing furniture around. Drew threatened to destroy Teddys photo of Martin Luther King Jr. Drew said MLK was a leader while Teddy was spineless. Drew said he was more like MLK than Teddy would ever be.

Rey Mysterio (has to join SES) vs. C.M. Punk (putting up his hair). The Straight Edge Society has been banned from ringside by Teddy Long.

Weird match. Mystrerio won clean with a crucifix cradle. The Mystery Man hit the ring beating on Mysterio, followed by Luke Gallows and Serena. They got handcuffs until Kane made the save. kane is hurting as he was having a hard time moving. he choke slammed Punk after throwing Gallows out of the ring. Kane beat Gallows to the back. Mysterio handcuffed Punk to the ropes. and gave him a 619. He put handcuffs on Punk's other wrist and then cut his hair. Mysterio used the razor and cut a lot of his hair, but didn't shave him bald. Mysterio showed Punk himself with a mirror and Punk did a great job of selling the haircut. Serena and the masked man helped Punk to the back.

Punk was bleeding most of the match. They stopped the match for about a minute or so as Charles Robinson and the trainer tried to stop the bleeding. The crowd started turning on it and Punk just got up and restarted the match even though he continued to bleed a little, and was bleeding worse as the match ended. They tried their best not to shoot the cut.

All championship matches are Fatal Four Way matches with qualifying matches on TV.

Chris Jericho and Big Show backstage. Jericho thanked him because if it wasn't for Show's arrogance, he and Miz would have never got together. Jericho said how he and Miz trimmed the fat. Jericho suggested Show & Bret form a tag team. Show told Miz and Jericho he was going to knock them both out. He told Jericho he'd knock him out, revive him and knock him out again. They both backed off and that was the end of the segment.

Hart Dynasty vs. Jericho & Miz for the tag titles.

Clean win for the Hart Dynasty, winning by using the regular Hart Foundation style Hart Attack on Miz and Smith got the pin. Best match so far on the show. Jericho & Miz got one near fall after another and kept complaining about ref John Cone counting slow. Best move was probably a springboard by Kidd into a codebreaker by Jericho, but Jericho was selling and didn't go for the cover for long enough to where Kidd kicked out.

Edge is busted under his right eye. The story here is that Randy Orton had some sort of an injury, maybe a broken forearm because his biceps didn't roll up. He was pounding the mat like he was doing the RKO and then winced in pain and started selling right right arm. Ref Jack Doan asked him what was wrong. Orton jumped out of the ring and he and Edge set up a spot where Edge went for a spear, Orton moved and Edge crashed into the barricades. Doan counted both men out of the ring. It was a slow starting match and then, clearly way early, Orton got hurt. A bad match, but understandable under the circumstances.

Note from backstage: The arm looks to be broken and Orton is throwing a fit.

Jack Swagger vs. Big Show for the world title

A 5:00 match ending when Swagger used a belt shot for the DQ. Total nothing match, almost an insult as a PPV main event. Post-match saw Swagger use two chair shots to Show's back, but Show made a comeback with a choke slam, a chair to the back, another choke slam onto the chair and finished with the knockout punch. So this was a way to keep the program going.

After the disappointing Edge vs. Orton match I can't believe they didn't reprogram this match. Cena and Batista are going to have to save the show because it's in the toilet right now.

Eve Torres vs. Maryse for the Divas title

Torres put Maryse's head between her legs, dropped down on her knees and cradled Maryse for the pin. Usual Torres match where she tries to put some athletic stuff into it, but it's kind of sloppy in spots as well. Crowd was totally dead as you'd expect putting these two so late in the show. Like when they put this show together and booked that horrible Show vs. Swagger match, they actually thought they needed a buffer to take the show down so Cena vs. Batista wouldn't start flat for following something hot.

Believe me, Cena and Batista should have no problems stealing this show.

Cena vs. Batista in an I quit match. They've got a half hour if they need it. Just told they are four minutes early based on the format going into this match.

Cena retained the title. The finish saw Batista try and back a car over Cena and they teased he did witht the car blocking the the fans' view of what happened. When they had people thinking Cena was run over, Cena showed up fresh as a daisy and attacked Batista in the car. He gave Batista an Attitude Adjustment on the car. He then picked Batista up and stood on the top of the car like he was going to give him an Attitude adjustment off the top of the car to the stage. Batista quit. Cena threw him off into a gimmicked part of the floor and Batista went through the floor.

After the match as Cena was leaving, Sheamus showed up and gave him the bicycle kick.

They brawled all over the building. A good main event. Not great. There was one spot where Cena used the STF and Batista passed out, but since he didn't quit, the match kept going. Cena had to pour water on Batista's face to revive him. There was also a spot after Batista powerslammed Cena through the returning Spanish announcers table, that Cena was cut and they had to do the stall while they patched up Cena's cut.
Posted by WrestleFigsUK at 20:20