WWE Money In The Bank 2015 DVD Review By Nathan Hunt 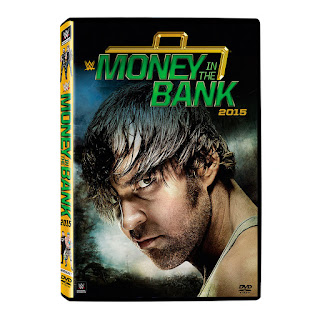 WWE's Money In The Bank 2015 is out now on DVD, boasting an impressive card with guaranteed excitement, highlighted by the titular match of the show and a main event Ladder Match between Seth Rollins and former Sheild teammate Dean Ambrose.  Definitely a disc which many fans have been eagerly anticipating, this event also featured some great undercard action from the likes of Kevin Owens vs John Cena and a decent tag team championship bout.
The two ladder-based outings bookend the show, starting with the multi-man Money In The Bank Ladder Match to open the disc in explosive fashion. This serves as an excellent stage for Neville & Kofi Kingston to showcase their creative aerial talents, Dolph Ziggler to demonstrate his superior athleticism and for Sheamus, Roman Reigns, Kane and Randy Orton to try to outdo one another with brutality and cunning. The performers all work to their strengths to make this a solid, varied and entertaining match with the usual highspots and dramatic devices, but delivered in a way that keeps the bout fresh and exciting throughout. While the ending is slightly underwhelming, the incredible action served up throughout makes this one you will certainly revisit and enjoy, especially along with some of the other excellent matches on offer.
The Divas Championship match between Paige and Nikki Bella is competitive and features some good exchanges. It is also one of the beginning moments of the current Divas Revolution, so may prove to be a historical point of interest in women's wrestling, depending how the plans for the division continue to unfold. Ryback vs Big Show for the Intercontinental championship is a brief encounter but has some impressive feats of strength and high impact power moves which make it watchable. It seemed to be a pattern up until this point on the disc that the action was highly watchable, but the endings were slightly disappointing or deflating for various reasons. The same could not be said for Kevin Owens vs John Cena. While the result may not please everyone, the brilliant bout ends in a suitably dramatic, gripping and exciting way, building to a crescendo which had fans on the edge of their seats and reacting to each man's every move. The crowd are audibly into the match from the outset, but are built to a frenzy towards the end, which always adds to the atmosphere when watching a match back after the fact. The gruelling back and forth warfare between the two is littered with thrills and ferocity, making it one to watch for anyone who has not yet had the pleasure, and one to own for anyone who has. An exciting post-match exchange means that those who didn't like the match result still feel satisfied with the way this portion of the disc comes to a close.
Not spectacular, but certainly strong, the tag team championship is an outing that you won't need to skip through as the New Day and Prime Time Players deliver a decent combination of styles, taking us into the main event of the show. The ladder match between Ambrose and Rollins is a complete war and the two make the most of the rules (or lack thereof) by taking the brawl outside the ring, around the arena and utilising the various tools at their diposal around ringside, making it stand apart from the ladder-based encounter from earlier in the evening. Given ample time, the two unleash an eclectic and well-told story of brutality and passion which sells their desire for the championship as well as their own heated rivalry. Inventive offense and a stellar finish leave the disc with a strong conclusion.
The discs extras are fairly average, although the Kevin Owens vs Neville match from Raw is certainly a welcome addition to the disc and adds some extra value and the Seth Rollins handicap match against J&J Security is entertaining too. Between the main event, the Money In The Bank Ladder Match and the Owens/Cena battle, MITB 2015 is a release which comes highly recommended and is well worth the pricetag. It is definitely an event that you will revisit time and time again, serving as a strong outing in it's own right and a welcome addition to any collection.

Purchase the DVD (or Blu-Ray) from  HERE
Posted by WrestleFigsUK at 11:50