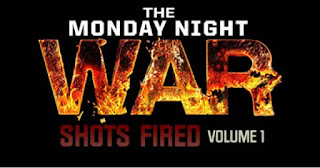 Disc 3 starts by looking at Mick Foley, his struggle to be recognised and his departure as WCW took on a different direction.

Episode 5 of Monday Night War covers, in brief, Foley’s tenure in WCW and ECW before moving onto his time in WWF where he would become Mankind, reintroduce Cactus Jack and bring Dude Love to the world, all whilst WCW was moving forward with the behemoth that was the nWo.

Thanks to a reckless disregard for his own safety, Foley could have, in the wrong hands, been a one-dimensional character, but the likes of Heyman and McMahon, along with his many supporters, would allow Foley to develop and show the man behind the character and it’s difficult not to like Foley, even if his work can be an acquired taste.

With audience appreciation growing and changing McMahon’s feelings towards him, Foley was unleashed, launching his career to new heights and even greater fan appreciation right at a point where WWF was changing direction to take the WCW head on.

After the show, we get Renee Young interviewing Triple H and Sting for analysis.  Both guys speak respectfully about Foley’s contribution to both WCW and WWF, including the Hell in a Cell moment, before moving onto Bischoff’s attitude towards WWF

Whereas Episode 5 focused on a hardcore legend, Episode 6 brings us an entirely different type of wrestler as we revisit Bret Hart’s gloried tenure in WWF and his short lived, underwhelming tour of WCW.

With tensions between Hart and Shawn Michaels intensifying to the point of explosion, the departure of Hall and Nash, and WCW’s growing popularity as a result, things were looking dark for WWF and, whilst the company grew around them, Hart was unhappy with what was happening and grew despondent leading to his decision, albeit with encouragement from Vince McMahon, to jump ship.

The result of this became a defining moment in WWF and wrestling history as the Montreal Screwjob would create the character of Mr McMahon, the Cure for the Common Show promo, cement Shawn Michaels’ infamy and lead to many wrestling fans getting their first glimpse behind the curtain thanks to the Wrestling With Shadows documentary.

With the hottest property in wrestling in their hands, WCW… did nothing significant with him.  Eventually, following the loss of Owen rocking his belief in the business, Bret’s career would end at the hands of Goldberg and he would eventually make amends - despite the deceit and double-dealing that had soured the business relationships - with Michaels, McMahon and others, returning to the WWE after more than a decade of animosity.

Reflecting on Hart, Renee Young talks to Triple H and Sting specifically about the Montreal Screwjob and events in WCW.  Triple H highlights the importance of the moment and recounts the moment where Bret hit Vince, remaining respectful of both sides of the business but revealing little new.  Sting talks about Bret in WCW, before Triple H moves the conversation onto Owen, Sting talks about Davey Boy Smith and the analysis comes to an end.

Episode 7 brings disc three to an end with Foundations of War, an episode that looks at two men whose “devotion never wavered” - Sting, the foundation of WCW, and The Undertaker, the mainstay of WWF.

In a time of over-the-top comic characters, The Undertaker was introduced as a silent behemoth, unstoppable and intimidating and would go onto to evolve into a darker, more dangerous character that appealed to the masses.  By contrast, Sting went from a colourfully painted wrestler into a dark anti-hero, a vigilante standing up to the bad guys and even greater success.

Both men, it seems, were able to navigate the choppy waters of wrestling politics, occupying the role of locker room leader in their promotions and gaining the respect of some of the best names in the business.

Despite Sting’s shifting popularity amongst those backstage of WCW, he was a consistent performer, moving aside to let others take the limelight.  The Undertaker, conversely, remained with WWF, occupying the role required of him by Vince McMahon.  Both were loyal, but their position within the behind-the-scenes business couldn’t have been more opposed.

The need to evolve, however, would redefine both characters - Sting became a “silent, stalking enigma”, The Undertaker became darker, almost Satanic - and become ever more popular and helping their respective companies gain the success that they needed.

With neither of the men speaking about their involvement, we get a number of those who know both men speaking positively about both men to paint the legacy of both men in glowing terms and discussion how they were important to the successes of WCW and WWF.

Triple H and Sting continue to talk to Renee Young about their memories of the timeframe of this episode.  With Sting now signed to WWE, he talks about WCW and the perception that he was overlooked, though doesn’t recall the “kill the business” conversation with Bischoff.  Triple H points out that many people say many things will kill the business and it’s just something that’s said at times of an uncomfortable shift.

Disc 3 of Monday Night War - Shots Fired focuses more on the characters that made the companies than the business decisions that informed them.  With the focus on Foley, Hart, Undertaker and Sting, we get a taste of what made these men popular - more of a highlight reel than an in depth exploration - whilst still talking about their impact upon the business and their dedication to their profession, sometimes misguidedly so.

For those of have seen them on the WWE Network, this series is still worth watching again, especially with the analysis after each episode, though it would be great if these were much longer.

As was the case with disc one and two, there’s some repetition of facts, but leaving these aside, the story of Monday Night War continues to be an engaging, though flawed, reflection on a period of history that is unlikely to ever be repeated.

The final disc review of this set will appear right here on wrestlingslasthope.com tomorrow
Posted by WrestleFigsUK at 02:59