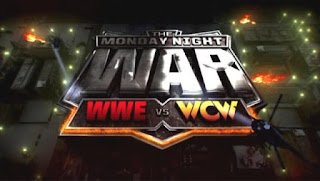 Disc Four of Monday Night War - Shots Fired - brings the first half of the series to an end with three episodes focusing on Stone Cold Steve Austin, Goldberg and the cruiserweights that would further cement WWF as the place to be.

Episode 8 recollects the Steve Austin story, from his time in WCW as he tries to find his feet, despite some unusual choices during the Bischoff era and the arrival of Hogan.  Austin contributes to the episode with his usual outspoken candidness without every being truly egotistical - this is a guy who is comfortable with who he is and his contribution.

Moving to ECW, Austin found himself getting the perfect opportunity to vent his anger, much to the delight of his new employer, Paul Heyman.  Whilst Bischoff may not have seen the money, Heyman certainly could and capitalised on this.

It wasn’t until he moved to WWF, with his new-found promo skills and exceptional ring work, that he would eventually catch fire as Stone Cold Steve Austin… and the rest is history as he fought career threatening injury, returned to fighting fitness and took part of some of the defining moments of the Attitude Era, until injury would force him to retire from active competition and his legacy would be carried by other men, spurred on by his success.

The post show analysis sees Triple H and Sting talk about the impact of Austin and how both men worked with him in WCW, before Triple H explores how Austin moved up in WWF and became the character he would eventually become.  Renee Young asks possibly the most controversial question of these analyses so far - asking if Vince McMahon is occasionally behind the times with his character ideas, with Triple H talking about character, persona and the other aspects that create the superstars.

Episode 9 looks at the unstoppable rise of Goldberg, with his occasionally incomprehensible winning streak.

Unlike many of the stars that would elevate Bischoff’s WCW to its heights, Goldberg was a creation of WCW and catapulted into the main event picture at a phenomenal rate, steamrolling over many of his peers and contemporaries.  It was, it is suggested, a response to WWF’s ongoing development of new stars - creating the stars of the future, as opposed to WCW’s stars of tomorrow and yesterday mentality.

With Goldberg coming from American Football to pro-wrestling, he was trained at the WCW Power Plant before being fast-tracked onto Monday Nitro and the streak began.  It would be a fairytale rise for Bill Goldberg, though his new found fame would cause its own issues backstage as well as in the ring as WCW attempted to unseat the reinvigorated WWF.

“Egos, petty jealousies, just a lot of nonsense,” in one sentence, William Regal sums up the issues with WCW as Goldberg’s ascension is brought crashing to a halt at the hands of Kevin Nash as the company continues to unravel at the seams.

Sting discusses working with and around Goldberg, whilst Triple H talks about the character from a business perspective as Renee Young, once more, interviews the pair.  Triple H’s approach to the rights and wrongs of Goldberg is pragmatic, placing the responsibility firmly on WCW instead of Bill Goldberg.

Episode 10 focuses on the cruiserweights - the men who would see that, despite the initial popularity of their division, they were no longer needed, let alone respected, by WCW before moving, almost wholesale, to the greener pastures of WWF.

Having brought in talent from Mexico and Japan, WCW were able to capitalise on talent that the American audience hadn’t seen, including a whole new style of wrestling - Lucha from Mexico and Pureso from Japan.  By combining these styles, Eric Bischoff brought a new favour of wrestling to their audience.

With talent like Eddie Guerrero, Dean Malenko, Rey Mysterio, Chris Jericho, amongst others, a high-flying, fast and frenzied world was introduced to a big audience, contrasting with the slower, American style of WCW’s heavyweights.  The cruiserweight division - which also featured talent such as Jushin Thunder Liger, La Parka and Billy Kidman - would put on matches that were breathtaking in their artistry.

Whilst WWF, by contrast, brought in a Light Heavyweight division, but rather half-heartedly, WCW was suffering from its own lack of direction, with the heavyweight nWo continuing to dominate the company to the detriment of the product and audience.

Fuelled by the departure of Chris Jericho, who came to WWF with the type of response that he rightly deserved and instantly finding a place on the already high-calibre roster, others would soon join him.  Whilst Chris Benoit’s name is mentioned in commentary, his contribution is overlooked, with the focus being on Guerrero, Malenko and Perry Saturn.


The eventual collapse of WCW, the flight of the cruiserweights to WWF and the fans hunger to see this style of wrestling on the biggest stage of them all has led to the acceptance of the smaller guys as main event material.  “We gave them something different to watch and they were liking what they were seeing”, Mysterio points out, before reflecting that “it wasn’t easy, there were many walls.”

To this day, the arrival of these cruiserweights has continued to have an influence on the WWE and may have been the moment where, despite Bischoff being dismissive, WCW truly lost out.

Triple H and Sting both credit Rey with being the definitive cruiserweight, whilst Sting talks about the reception of the cruiserweights within WCW in the post-show analysis with Renee Young.  Triple H supports Sting’s point of view that the cruiserweights weren’t given the opportunity to develop a character, something that WWF/E was more than happy to do.

Monday Night War - Shots Fired is a superbly executed revision of the history of WWF and WCW during the infamous era.  Written by the victors, there’s certainly elements that have been glossed over, or totally whitewashed, but it still stands as a fine example of WWE’s ability to create compelling documentaries.

If there are downsides to this documentary series, it’s the lack of discussion from Stephanie, and those around Vince, of what it was like living with Vince McMahon during a period where their very livelihood could have been lost.  Much of the archive interview footage will be familiar to fans of previous WWE documentaries and the post-show analysis does feel a bit one-sided at times, let alone short - just as it really gets going, Renee introduces the next episode of the series.

Overall, though, WWE has excelled in the creation of this series and Volume 2 can’t come quick enough!
Posted by WrestleFigsUK at 23:22