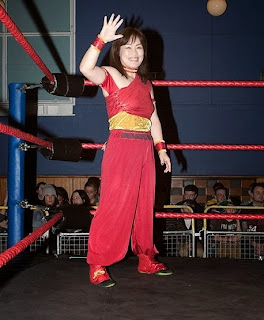 I have just finished reading the excellent “Spandex - Screw Jobs and Cheap Pops” by Carrie Dunn, comparable in quality to Greg Lamberts “Holy Grail” but very different in style and the story it is trying to put over. One of the most interesting chapters covered women’s wrestling and more importantly the perception and attitudes towards it. So I felt motivated or inspired to write about the way I see it.

I can’t lie and say I didn’t enjoy the WWE women’s “wrestling” in the attitude era, from a purely entertainment stand point, and to a teenage boy bra and pantie matches, pudding matches and puppies were all great! With hindsight and with a more mature opinion of wrestling as a whole I can see why all this was detrimental to female competitors at the time and up to the present. And now it is an uphill struggle to bring the perception around. There have been some great female performers in WWE over the years but they are rarely given the chance to shine either hiring people on looks alone or saddling them with appalling story lines or gimmicks. TNA on the other hand has given female performers a real opportunity to go out and steal the show. Gail Kim, to me, is one of the best female performers about and with Taryn Terrell has put on some of the best women’s matches I have ever seen.

Growing up Ladies football was often considered the same way, as a poor version of the “real” thing, at the time it wasn’t great and there were some laughable incidents but since then so much work and effort has gone into the game that it has improved massively. The same has been happening with women’s wrestling but I still feel that some people still see it as “filler” or even still just as “T&A.” Since I got into British wrestling in the last few years I have seen some great matches and competitors. The first I recall seeing was at a FWA show at Memorabilia at the NEC in Birmingham, the weekend coincided with BritWresFest so instead of FWA matches they highlighted matches from other promotions. The match I saw was Nikki Storm vs Pollyanna, Storm though small in stature really commanded the crowd and interacted as well as if not better than most male wrestlers. Most of the abuse came from 3 lads who took exception to her being Scottish and she handled them brilliantly, at the end of the match when there was an opportunity to get photos in the ring the 3 lads were first in line to get a photo with her, they were suitably impressed! Storm was great in the ring and really lived her character even after the match. The match itself was very good; both competitors looked every bit as good as “the boys” are.

At my first visit to AWW I got to see Erin Angel perform, when she came to the ring she looked great and once the bell rang she proved to be more than capable in the ring and put on a solid match. As I mentioned in a previous blog AWW are also responsible for one of my 2013 Matches of the Year – Emi Sakura taking on Shanna. Sakura was an 11th hour replacement for Kay Lee Ray who I was disappointed to not be seeing but boy was I amazed by the match. From start to finish both ladies threw everything at one another, technical skill, hard hitting and high flying moves back and forth with a tonne of near falls and times where the packed crowd was sure it was all over. It had everything any great match should have and why shouldn’t this be the case?

Kay Lee Ray is one of the best wrestlers I have ever seen – male or female. Not only does she have an amazing look, great personality and character but her in ring skills are top notch. I have only seen her live once – taking on Bubblegum at PWK – but I have seen plenty of DVDs and YouTube videos showcasing her talent against women, men and even in hardcore matches.

I can’t really write about women’s wrestling without mentioning Alpha Female – a giant of a lady, a monster in the ring with amazing technical skill and an absolutely lovely person! Alpha can command a ring and a match as well as anybody I have ever seen and is more than capable of power moves and technical wrestling.

Not all women’s matches are great, not all female wrestlers are great – but the same can very easily be said about men’s wrestling, but there is definitely a place for it regularly on cards. I personally look forward to women’s matches as you quite often see something or someone new. Carrie Dunns book alludes to some promoters deliberately putting down female performers or not letting them do much in their matches – if this is happening, and I’m sure it is, then those promoters are clearly missing out, and more importantly they are helping create a vicious circle, by holding back the performers they are preventing them from gaining experience and improving and by doing that they will always be proving their point – to themselves at least. Personally I can’t see why promoters wouldn’t want high quality females on their shows; it gives variety and a different dynamic to the show as well as introducing something potentially new to the audience. Most shows are sold as “Fun for all the family” having strong females on the show surely fits into this, girls attending shows can get string role models too and grow up knowing that wrestling isn’t just a boys club.

Well, that’s my ramble for now. This wasn’t a planned column so it may read a little erratic I just thought I would put my opinion forward. You may agree or disagree, you may like it or not, but it’s the way I see it