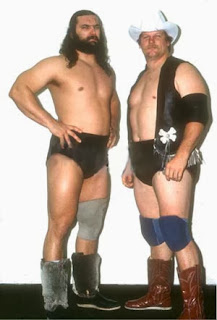 The life of an independent wrestler is one of hard work and dedication for the thing they truly love pro wrestling. For many WWE will never come calling but for some there is Japan the land of Puroresu over the years many independent wrestlers have made a living in Japan, Chris Jericho and Mick Foley worked regularly in Japan before getting the call from the WWF or WCW.

Doug Williams and Nigel McGuinness spent time working for Pro Wrestling NOAH and were a credit to the roster.

Karl Anderson has made a great career for himself working for NJPW and Doc Gallows has had a new lease of life for his career working there too. Ricochet, The Young Bucks and Rich Swann tour Japan regularly. Many independent wrestlers strive to get better at their craft and therefore look to get booked in Japan.

The fact that Dave "Fit" Finlay and John "Johnny Ace" Laurinaitis two men who spent the vast majority of their wrestling life's in Japan now work for the WWE as backstage road agents speaks volumes about the knowledge and experience that wrestling in Japan brings you.
Posted by WrestleFigsUK at 10:56