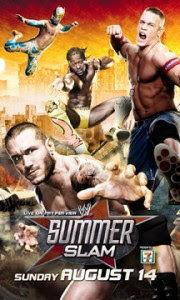 So here we are, it's the final PPV of the first half of the years for the WLH PPV Prediction League, whoever has the most points following Summer Slam will win a wrestling DVD. Hopefully, for the second half of the year I will have more people involved, it's a good bit of fun and there is a DVD to be won so tell your friends to get involved. Anyway, below are the matches for Summer Slam