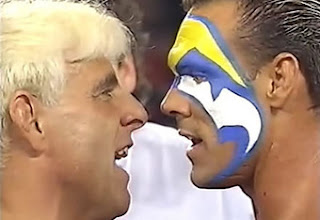 On March 27th 1988, Ric Flair basically made Sting a genuine main event star at the first Clash of the Champions special. Although the match ended in a 45 minute draw and the judges were split as to who they thought had won it turned Sting from a popular midcard guy into WCW's most popular babyface. Interesting note to that match, is that the judge who picked Flair as the winner was a woman called Patty Mullen who was a former Penthouse Pet of the Month. Obviously Flair's boasts of 'Space Mountain' were remembered well.
The serious point though is that was over 23 years ago and TNA have decided that now is the time that Sting will once again face the 'Nature Boy' on PPV. Why TNA think that their fans would want to see Sting and Flair wrestle one another in 2011 is a complete mystery, have they decided that their obsession of trying to re-create WCW of the 1990's was not retro enough so that they should go back to the 1980's.
Weirdly the idea that Sting vs Flair should appear on PPV, was an idea that TNA have wanted to do since Ric Flair made his debut in TNA in January 2010. They have a feeling that although it was successful in 1988 and eventually WCW did make the decision to have Sting as the company's main man in 1990 when he defeated Flair for the World title at the Great American Bash in an event that was titled 'The New Revolution'. Unfortunately though Sting was not a success as a draw and the title was quitely put back on Flair in January 1991 when WCW decided they couldn't wait until a PPV event to move the title back to Flair.
Those two matches in 1988 and 1990 are the only real evidence that these two have good chemistry together and could attract ratings and PPV orders. Although they had the occasional feud in the 1990's they were mainly kept apart, Sting got to hang out in the rafters and Flair would be booked to be a complete idiot for the last several years of WCW. However they remained to a certain degree the main stays of WCW and on the final episode of Nitro they wrestled in a frankly awful match in which as usual Sting won. The quality of the match though was irrelevant though it was an emotional send off to the company and it was the two biggest stars that got to do the final goodbye.
TNA have in my view have always seen Sting as more important than he actually his, I have never been convinced that Sting as shown that he as been able to make that much of difference to TNA ratings or the PPV buy-rates. As he is now into his 50's he is pretty limited as to what he can do, he can still put in decent performances when he is working with the right person but it's obvious that in his matches he needs to be led. His promo work is better than it's probably ever been and while people initially enjoyed his new Joker persona, it's becoming frankly ridiculous. Although it was noticeable that in the final show before Hardcore Justice PPV, Sting toned down the persona in a final effort to attract PPV buys.
The use of Ric Flair also would seem to show that he is also not worth the money they are paying him. He has also not been seen on TV for several weeks a combination of Flair suffering a torn rotator cuff and also that he made his minimum number of appearances and so in an attempt to cut costs he wasn't used for a while. His promos are still more often than not great although they tend to be more wacky and less focused than in his glory days. He often seems to go out to just entertain himself and contradicts TNA's attempted storylines. He really should not be wrestling anymore although the truth is that if they do manage to have a good match then the credit will go to Flair.
The scariest thought of all though is that the Sting vs Ric Flair match at the No Surrender PPV is simply a stepping stone to the big event in TNA this year. The match in question is Sting vs Hulk Hogan, a match which considering Hogan's current physical state could be about as good as Hogan-Warrior 2 from Halloween Havoc 1998. And yet TNA do not seem to be aware that trying to offer themselves as a nostalgia promotion is a terrible idea. There seems to be very little that TNA can do to effect things in any kind of positive manner, the buyrate for Hardcore Justice seems to be the same as Destination X which was 8,000. However the company really needs to look for the future and with every passing month they seem to be more inclined to look towards the past and hope that the magic of March 1988 will work again, it won't.
Posted by WrestleFigsUK at 02:43