The Rise Of Punk - By Captain Obvious 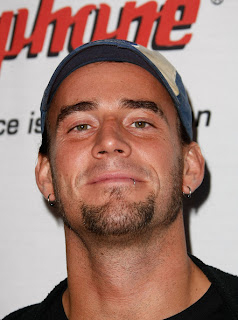 Some of you may see the title of this and tell me that CM Punk has been risen. That the Internet wrestling community has known how great CM Punk has been for while now. That this is no surprise to us, we knew all along he was the best in the world. Well, this isn't about what we knew. This is about why the "normal" wrestling fans have taken a shine to him and catapulted him to elite status with the names of John Cena and Randy Orton.
What makes CM Punk so special. He isn't the biggest guy in the world, but neither were Flair, Bret, Michaels, and Jericho. He isnt the flashiest guy, but neither was Austin, Angle, or Funk. There has to be something about him that draw people in. Maybe its the fact we can all see how much he loves doing what he does. CM Punk would be a horrible poker player because you can genuinely see his emotions when he is on screen. You can tell when he's having fun or when he is just going through the motions trying to make corporate happy. The guy eats, sleeps, and bleeds wrestling. Punk is always looking for ways to improve his wrestling ability, his character and also help bring along the guys who helped him get to where he is. The great thing is the guys he wants to help out don't suck in the ring.
Another thing that has really helped Punk is the era we live in. Reality TV is everywhere still to this day. As people, we love to be voyeurs and then ridicule the people we love to watch. Car wreck TV, so to speak. Why else would Jerry Springer have a show on this long. How do you think Oprah got her fame? She wasn't interviewing Tom Cruise when she started. She was interviewing the midget who had a foursome with an albino track star, a chemistry teacher, and a 400 lb. McDonald's drive-thru girl who kept getting stuck at the window because she couldn't get out. Punk has tapped into that vein, even before his "shoot" promo on him leaving the WWE. He is the most real character on wrestling television today. He says he is straight edge and he lives his life that way. Everything he says seems to end up happening, so why doubt the words now?
In the same way that Hulk Hogan got us to all say our prayers and take our vitamins, CM Punk has tapped into that vein of purism. Every time we look around, we see all this negativity in the world. People running around shooting one another, doing all kinds of insane amounts of drugs, just day to day crap that seems to want to bury us all underneath it. Punk has come along and brought of ray of Truth (sorry R-Truth). his candor and honesty is refreshing and he is actually someone kids can look up to and admire. I doubt we will be seeing any half naked pics tweeted from him (although one from Beth Phoenix I wouldn't mind). Punk can the bearer for this generation much in the same way most wrestling fans think of the virtuous days of Hulkamania.
The other thing Punk has recaptured from the attitude days is this undertow of animosity towards corporate America. It's no coincidence that Punks sudden rise to mainstream fame was done in the same way Steve Austins career took off. The hardcore fans noticed how great the in-ring work was and then the mainstream fans noticed their anti-authority stance and followed suit behind their respective antagonist. Punk has grabbed the flag that Austin layed down and waves it proudly as the voice of the voiceless. It's everyones dream to punch their boss in the face and we get to live that excitement every Monday night.


Captain Obvious Trey Dent
Part time co-host of The Still Real To Us Show
Friend me on Facebook......http://www.facebook.com/TheCaptainObvious ;
Follow me on Twitter..... @captainOMG
and if I had merchandise I know you'd buy it too
Posted by WrestleFigsUK at 13:41