The History of the WWE Hardcore Championship Review by Tim Ricketts 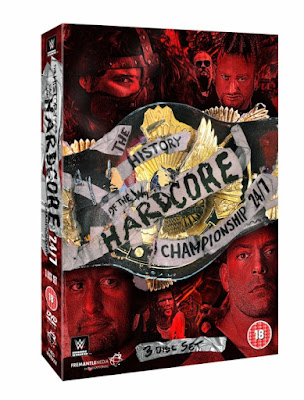 Wrestling Championships have, historically, been treated with a lot of reverence, respect and seriousness – rightly so, given that they represent being at the zenith of a promotion or division – but with this DVD we are being presented with the Championship that was as mould-breaking as the Era from which it was borne.  The WWE Hardcore Championship, initially conceived as a creative opportunity to capitalise on Mick Foley's hardcore heritage, injected unpredictability, humour and relevance as it picked up on the wrestling zeitgeist of ECW and presented it to a wider audience.  This should be 3 discs of pure nostalgia, brutality and, above all, fun.

With previous 'History of...' offerings majoritively being match compilations linked by studio-based segues from luminaries like Jim Ross or JBL, this rightly differs with a unique take on the format.  After the standard 'Then, Now, Forever,' 'Don't try this at home,' and a quick introductory highlight-reel, the inaugural champion, Mick Foley, appears in a somewhat derelict – or as he puts it 'post-apocalyptic' – warehouse.  He, in turn, introduces the final champ, Rob Van Dam and the 39-reign record holder Raven as they take their seats around a scrap-lumber table bedecked with a replica Hardcore belt.  So we're in for a round-table discussion as well as no-holds-barred action; this should add some welcome flavour to a match compilation DVD, considering that these three Legends are not only appropriately experienced in the division, but also represent three distinct periods in it.

So after a brief discussion between the three hosts regarding their relationships with the Title at hand, we head to the real nitty-gritty: around 50 matches over 3 disks, many with multiple title changes, interspersed by the 'studio' discussion.  Disc one covers the origins of the Title being awarded to Mankind for his solitary reign, through two absolute classic Al Snow matches, first against Road Dogg ending up in the snow, then against Bob Holly ending up in the Mississippi river!

Hardcore Holly deservedly becomes the focus for a while; his transformation from Thurmann 'Sparky' Plugg was firmly established between the ill-fated Brawl-for-All and subsequent exploits in the hardcore division, even taking on his former tag-partner (and fellow legitimate bad-ass) Bart Gunn.  'Hardcore' isn't the only kayfabe cousin in the Holly family with heritage in this Championship though, as Crash Holly's rise brought in the 24/7 rule.  If, as previously discussed by the panel, the No-disqualification, falls-count-anywhere nature of the title was a huge creative release, then the addition of round-the-clock defences (providing proximal referee access) was a creative explosion.  The remainder of the first disc is dedicated to these fun, fast and frenetic fights, the obvious highlights of which are Crash being ambushed by The Mean Street Posse at an Airport luggage carousel, and by The Headbangers in a kids' ball pit.

The early days of the WWE Hardcore Championship were marked with backstage brawling and the ridiculous locations of the 24/7 free-for-all, but we start to move on from that in disc two as the style progressed (or regressed, depending on your view) more to bringing your weapons to the ring.  The first featured Superstar is 'The Lethal Weapon' Steve Blackman, who held the title a record number of days, including his outstanding feud with Shane McMahon (cue trademark Shane-o-Mac long drop) and a very good triple-threat-cum-handicap-match against Edge & Christian.

The spotlight moves on again, this time to Raven, who's presence on the hosting panel allows some extra insight into his perspective of the Hardcore Championship as well as the well-chosen example matches, before we hit the heady-heights of early 2001.  If the Hardcore title had started as a rib but gained acceptance as a significant mid-card championship, then it was about to peak as WWE's main-event talent got involved in the picture: Wrestlemania X-7 featured a hardcore triple-threat (with brief punditry from the panel) and we're given matches involving Big Show, Kane and Y2J to round out the disc.

With the influx of wrestlers from ECW and WCW during the Invasion of 2001, in particular the talent with ECW heritage, we have yet another change of style and increase in pace for the first part of disc three, Jeff Hardy also adding his brand of TLC in bouts against Mike Awesome and RVD.  Rob Van Dam cut himself a solid niche in the division at this time, he gets to explain how important that was himself before examples against Tajiri, Kurt Angle, The Rock and The Undertaker.  Not only did these project him in to the main event picture, it seems to me that the Jeff Hardy and RVD matches on this DVD set-up the prevailing WWE hardcore style over the coming years, of Tables, Ladders and Chairs, in effect today more than ever.  Van Dam himself at least concurs that both his and Hardy's ideas were in the same zone of 'cool'.

The Undertaker's single but durational reign is briefly highlighted, with the Legend in 'American Bad-ass' mode and giving the Championship another Main-Event feel, even as Maven finally dethrones him.  Within weeks of this however the Brand Extension occurs, giving life once more to the 24/7 rule and rapid-fire title changes; even interviewer Terri 'Marlena' Runnels manages to have an opportunistic reign.

The fun times wouldn't last forever though; the Brand Extension was a new era for the expanded WWE, and with the many inherited championships amongst the spoils of the Monday Night War it was only natural that some would be unified in the spirit of rationalisation. On RAW August 26 2002, The WWE Hardcore Championship became the third title unified with the Intercontinental within 10 months, in an absolutely fitting send-off match between Tommy Dreamer and Rob Van Dam that famously left Dreamer in tears.

Whilst the Championship lineage died out only four years after establishment, its influence is still felt today in our contemporary TLC and Extreme Rules pay-per-views.  It usually forms a large part of any Attitude Era Fan's nostalgia, and for good reason: it was a breath of fresh air that provided genuine 'attitude' as well as novel matches. Also it provided something that WWE has since lacked: situations and settings that could be creatively exploited without it being at the expense of either wrestler's character, particularly with humour.  You could throw the most po-faced of athletes into 24/7-rule hilarity, but it wouldn't tarnish their character because they were just reacting to the same crazy dilemmas as anyone else.  At least we have this nigh-on nine-hour gem to remind us of these fantastic times, talents and all-out fights; quite literally the best WWE DVD set released in years.