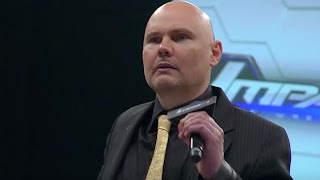 The wrestling is world is awaiting news of TNA Wrestling impending sale, recent reports have Vince McMahon and the WWE as potential new owners but I've been told from a reliable source that the sale was actually completed last night, with Billy Corgan.

Now the sale is said to be extremely complicated with the level of debt at TNA being more than it possible sale value, from what I understand Billy Corgan is the new TNA owner and has put up the money for Fridays Bound For Glory PPV event, while no official announcement has been made it seems the likely reason that has Billy Corgan join several radio shows today and tomorrow.

Other rumours that came out this morning were that Vince and WWE had acquired the TNA video library to assist with the debts being cleared and Billy Corgan buying the company which includes the talent contacts, while this seems a good deal for everyone involved it seems a while too complicated to complete what with Aroluxe still owning part of the company aswell.

Now there is alot of rumours floating around, I can confirm the information is from a person working inside TNA who was told last night of the sale.

What will Billy Corgan has in store as the companies new owner ? Tell will tell but personally the wrestling world needs TNA around and health so it can be an alternative place for wrestlers to grow and develop, while giving us fans other options than a monopolized industry completely.

Now lets all get behind Billy Corgan/TNA and its resurgence starting this Sunday at Bound For Glory.
Posted by WrestleFigsUK at 12:07