WWE Money In The Bank 2016 DVD Review By Tim Ricketts 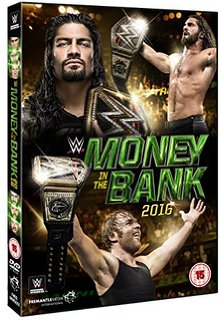 For the past eleven years, WWE have held an annual Ladder Match with the prize of a cash-in contract for the WWE Championship, held in a 'Money in the Bank' briefcase above the ring. A significant reward for an important match, so it's no surprise that it has often been a feature match at Wrestlemania or, as in this case, its own event. With past Money in the Banks not necessarily living up to their potential to be explosive, it has often led to them being considered one of the 'lesser' events in the WWE calendar, but I disagree.  The contracts themselves are a significant prize (q.v. Seth Rollins' run as 'Mr. Money in the Bank') and on the night cash-ins have happened before if you're not a fan of these extended Title-esque runs too.  The point is that this event injects a wild-card sense of anticipation to the WWE title picture from the moment a wrestler successfully climbs that ladder.

If the premise alone doesn't whet your appetite sufficiently, then we also have an under-card featuring a Fatal 4-Way for the Tag Titles, more tag action involving the Woman's Champion Charlotte and some recent contenders for her title, a Cena-Styles 'dream' match, a US Championship match and a main-event of the former SHIELD brethren, Reigns and Rollins, for the WWE Championship.

As 'Extra Features' are Blu-Ray exclusive, I shall dive right into the event!

Tag Championship Fatal 4-Way
The New Day (c) vs. Enzo & Big Cass vs. The Vaudevillans vs. The Club

The New Day and Enzo Amore warm up the crowd well for this, with their usually good promo patter being on form.  The Club being involved also reduces their chances of interfering with the Styles-Cena match later, which is probably a good thing, if not for Styles, then for Cena.

This is a great match to kick the DVD off, as it is action packed from beginning to end. With plenty of in-ring work, ringside cheating, double-teaming, interrupted counts and the best of both four-way and tag-team styles applied. With only 20-odd days left until they (potentially) beat the record-length WWE Tag Title reign, it's no surprise that The New Day go all out to retain their belts.

Following a back-stage interview that just ends in insults between Owens, Del Rio and Jericho, we have:

Despite winning the Andre the Giant Memorial Battle Royal at Wrestlemania, the WWE crowd have not taken too well to Baron Corbin, and they let him know here.  The raucous jeers don't put him off as he deflects Ziggler's plucky attack, time and time again. Dolph's resilience is well known though, and he keeps at the tall NXT graduate with his agile offence, until a slip on the ring steps leads to a Deep Six to the floor from Corbin. Neither competitor held back, but after repeated attempts, Corbin hit the End-of-Days for the 1-2-3.

After Dana Brooke took over Ric Flair's duties in interfering in his daughter's matches, both Natalya and Becky have a major grievance with her and Charlotte.  This tag match was classic bad-guys versus good-guys and all the tactics that this entails.  Lynch and Natalya for their part keep it clean, fast and dexterous, whilst Brooke and Charlotte remain true to type in order to cheat, distract and eventually steal the win after the ref's back was turned.

The Irishman has an issue with these 'New Era' NXT guys coming through and taking his spot, so he's taking it out on Crews.  The strapping underdog with the mile-wide smile is having none of it though; belying his un-favoured billing he takes the match to his more experienced, multi-time Champion opponent for a deceptively even bout.

As Sheamus' experience starts to tell, he puts a brutal White Noise on Apollo for a two-count.  Sheamus shouldn't have tried to argue with the referee for as long as he did though, Crews cheekily grabbing him from the mat for a roll-up pin.

Prior to this 'Dream Match,' AJ Styles was given the opportunity to sign one of two contracts: one for Cena vs. The Club or Cena vs. Styles.  Styles chose to go it alone and prove what a bonafide Superstar he is, foregoing the assistance of Gallows and Anderson.

This match was one of terrific work-rate, and good quality, with trademark moves in abundance. Both proved to the house crowd how good they are, even if it was not quite the 'Wrestlemania quality' many had hoped for.  Finally, and with AJ out of it, the Club did make a run-in to cost Cena victory.  Styles capitalised on it to steal the win, but was it valid enough to be the proof he needs from himself in the long run?

Money in the Bank Ladder Match:
Cesaro vs. Zayn vs. Ambrose vs. Del Rio vs. Owens vs. Jericho

Ladder Matches with this many competitors are often fast-paced frenetic things and this captures that to a tee, with plenty of early ringside action.  Whilst the ring is still relatively clear of ladders, and the corners filled with staggered athletes, we're treated to Uppercut, Cannonball, Helluva Kick and Cesaro Spin Parties. When the ladders do come into play, no body escapes a painful blow, either on to, or from one; Del Rio locks in a cross-arm-breaker through one, and The Lunatic Fringe elbow drops from the top of one!

Kevin Owens and Sammy Zayn continue their perennial feud in this match too. Zayn delivered a particularly nasty Michinoku Driver, which left Owens draped over the side-edge of the ladders in agony, only moments after he'd Frog-splashed Ambrose.

The zenith of this match comes when all six men are battling atop two ladders, dropping one by one until only Ambrose and Owens are left, the former SHIELD man grabbing the Canadian through the top rungs and smashing him unconscious.  Taking the briefcase and the opportunity, Dean Ambrose also adds a new potential threat to the main event.

The opening blows of this bout sets the tone, as both competitors lay prone from a double lariat on to the ringside matting.  Strong, hard strikes and kicks are the signature of this brutal encounter, Rusev using them to take it to the mat for a submission, while Titus makes several creditable attempts to finish the Bulgarian Brute with some slam variations.  On his second attempt at applying the Accolade, Rusev squeezes the submission from the challenger to extend his impressive US Title run.

Seth Rollins, back from injury and determined to regain the belt he was stripped of, has Reigns firmly in his sights. However, Roman has other ideas; even if he has given up trying to win over the still largely hostile WWE Universe, he still needs to prove that he actually is 'the Guy' by putting away this particular personal demon.

Roman Reigns starts the match with methodical control, making every strike, kick and manoeuvre as hard as possible, Rollins only retaliating occasionally on the counter.  The brutalised Architect finally establishes himself on to the match with some high-flying action from the turnbuckle to remind his former SHIELD team-mate why he was champ too, even so far as to successfully test his injury by using the buckle-bomb that put him out.

These two impressive athletes took each other to the point of exhaustion, Roman following Seth to ringside as he tried to escape for some respite, only to put himself through the barricade as the wily Rollins dodged.  Incensed, Reigns takes it to Rollins back in the ring, fails to get the pin as the referee is knocked down, so goes for the Spear. Mid-air, the staggered Seth reacts instinctively to turn it into a Pedigree. One repetition on Roman is enough to get the pin, vindication and the Title.

This story isn't over yet though.  The 'forgotten man' of the SHIELD trio, fresh with the opportunity of Money in the Bank, adds one last twist to the proceedings.  Dean Ambrose's music hits, as does the briefcase with Rollins' head, and all it takes for us to have our third WWE Champion of the evening is one sweetly struck Dirty Deeds!

This show has some great twists, a brilliant climax and the build for Ambrose's opportunistic success, all of which will be remembered well for their execution and passion.

While some reviewers have pointed out that the Network has removed some of the shine from DVD releases, I would argue that they still play as important a role as ever.  If you are a big fan of the SHIELD, and in particular Dean Ambrose, then this is an absolute treat, or just as a self-contained one-off watch for a beautiful underdog story.  This is much better than average fare from a PPV that isn't a 'Big Four' and well worth adding to your collection.