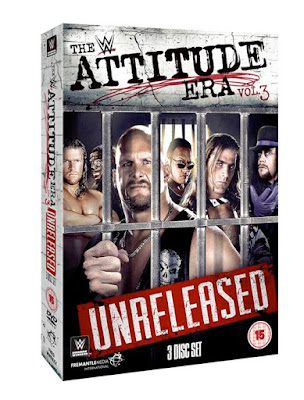 When I received this DVD set to review, I honestly had no preconceptions of it: whilst the first two volumes of the Attitude Era were respectively excellent and very good, recent WWE DVD offerings have had a tendency to repetitively use the same footage to cover the late 90's, with different opinions attached to the surrounding Vox Pops.  At the very least this set promised to take a different approach to that, if the 'Unreleased' moniker is anything to go by.  The DVD menu is well presented, as usual for a WWE release, and each disc's Chapters screen is well defined with full match details.

The DVD is presented by the rising star of the WWE presenting team, Corey Graves, who introduces the concept of this compilation: the matches featuring Attitude Era stars that never made it past the editing suite.  Foreign Tours, PPV 'dark' matches, non-televised 'house shows' all finally get to see the light of day, and for those of you not as aged as this toothless old badger, Corey informs us about the vagaries of Hi-8 video too.  They've polished up that 'ancient' video technology as well as possible for the first match, 'Stone Cold' Steve Austin versus Bret Hart in Germany from the 1996 European tour.  A ringside camera captured a match that is a good example of the mat-based styles both were using at the time, and a fairly good way to kick-off the DVD.

Graves gives us some background on Undertaker and Mankind's feud, as we move on to match two, a 'dark' match (an non-broadcast match from a TV or Pay-per-View event) between them from In Your House: Good Friends, Better Enemies.  This first meeting was only a taste of the hardcore nightmare that would be their Hell-in-a-Cell bout a year-or-so down the line, but good value in it's own right.

The next two matches, from WWE's 1996 visit to Kuwait, both play massively to the tour crowd. Undertaker and Bret Hart versus the British Bulldog and Owen Hart is the classic fan-favourites against despised villains, both in the build-up and match tactics, whilst Million Dollar Champion 'Stone Cold' Steve Austin and Shawn Michaels go at it full throttle for the WWE Championship.

At this point in the DVD, it is pretty clear that we are not going to be getting the 'luxuries' here like commentary or the WWE's usual multiple cameras, but if you watch a lot of Independent Wrestling, like me, then it's probably something you can live with.  The other obvious thing is that there are technical reasons why these have not been seen before, like the lighting rig going in the previous match.

Still in 1996, we're back in the familiar WWE stomping-ground of Madison Square Garden for Ultimate Warrior's first appearance in 5 years producing an excellent match against Owen Hart to cover for the latter's legitimate injury, and an Austin versus Undertaker bout that broke down via interference, conveniently leading in to the last two matches.

Rounding out Disc One are two more In Your House dark matches. Goldust takes it to Shawn Michaels on the mic' and in the ring for the championship and lastly Michaels, again, defends against Mankind.

Disc Two kicks off with a bang as Bret Hart, champion Shawn Michaels and Sycho Sid face off in a triple-threat match in Toronto's Skydome; all three worked well with Bret playing up the valiant underdog role to his compatriots. This Non-televised RAW match is a bit of a corker, and certainly warmed the Canadian crowd up for the Montreal Screwjob later in the year when Michaels dives in to steal the win, as Bret tries to submit Sid.  RAW dark matches take over from In Your House on this disc, with Chainsaw Charlie (Terry Funk) making his début, just before New Years 1998, teaming with Cactus Jack, Stone Cold and Undertaker against the Nation of Domination in a solid hardcore tag-match.

An inexperienced-looking Ken Shamrock is rattled by The Rock and his Nation stable-mates at an Anaheim house-show, followed by Cactus Jack's MSG première in a Falls Count Anywhere match against Billy Gunn.  Seeing Cactus, as opposed to Mankind, carrying a bin full of weapons to the ring was beautiful sight, and the crowd produced a good atmosphere as a result.

The spotlight shifts to Triple-H in the next pair of matches.  Standing in for his Degeneration X partner, HHH takes on 'Stone Cold' Steve Austin before Shaun Michaels is due to meet him in the infamous match involving Mike Tyson, demonstrating his ability to shine on his own at that time.  This is followed by a match against the Big Show in which we get to appreciate Helmsley's technical range, in comparison to the previous match it's a switch in styles to meet the challenge of an opponent.

With WWE's late-90's boom period, it was somewhat inevitable that they would 'go public' at some point.  When they did, they did it in full Sports Entertainment style by closing Wall Street to put on a wrestling show.  For the final match on the disc, we get to see the legendary Dudley Boyz make short work of Test and Albert in front of the Stock Exchange, “Get the Tables” echoing off the building's walls!

Throughout these two discs, the matches have been punctuated by Corey Graves giving some historical perspectives directly to the camera, but also some fly-on-the-wall segments in the style of out-takes.  He wraps up the collection with one final slightly surreal moment.  These seem a little too post-modern ironically self-aware for me to 'get it', but they had my wife chuckling so I'm assuming it's just not to my taste!

Wait... What?  Yes, a DVD compilation of what is essentially 'Extras' content has its own 'Extras' (or 'Special Features') DVD, and as you might expect, the production errors were even more significant than in the main content. But let us not be hasty, despite not having the pinfall recorded, or a major spot or move missed, these matches are some of the most fun.

Here are my personal highlights: The exception that proves the rule, the first match on this disc is the only one with commentary and broadcast-quality production values as Yokozuna takes on The Sultan (Rikishi) in South Africa. Owen Hart and Jim Ross are a blessed delight and underline how important the vocal feedback is to the WWE product, and the local pundit is also good value for his additions.  'Stone Cold' Steve Austin, Cactus Jack and Chainsaw Charlie versus The Rock and the New Age Outlaws was another fun but brutal encounter, even if the cameraman was often out of position. The final match in the set sees Tag Champs the Hardy Boyz in their early pomp, accompanied by Women's Champion Lita, as they demolish Lo-Down on Wall Street.

Rather than giving us the same clips recycled again for another look back at their history, WWE have really pulled out the stops to give us the polar opposite.  They may have hit the cutting-room floor for a reason, but for the wrestling archivist, completist or collector this is a little gem of uncovered history.  This is probably not one that a casual viewer could appreciate in one sitting though, the lack of polish and commentary taking the product  back to its live event roots over WWE's usual TV glitz and glamour, but with the Era's biggest Superstars going head-to-head each match has it's own individual appeal.