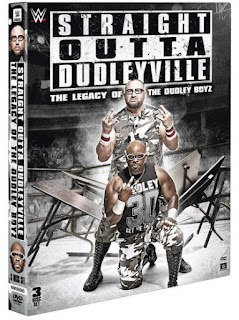 This is the latest WWE release and is a 3 disc set which includes a documentary and matches covering both their ECW and WWE runs.

To be honest there isn't a great deal to the documentary and it covers everything from their childhood to their WWE return on Raw after the 2015 SummerSlam event in a mere 73 minutes. There is the occasional interesting bit of trivia such as Bubba's ECW debut wasn't as a member of the Dudley clan but as a bodyguard to Bill Alfonso who they named Mongo Vile whose job was to take a chokeslam from 911.

They also discussed why they felt they were successful in the WWE but fellow ECW stars The Public Enemy were a disaster, their time in TNA does actually get a brief mention. Their main motivation to go there was because they wanted to work in Japan and TNA enabled them to do it. Bubba also admits to enjoying his time there, D-Von not so much.

The main reason to buy this set is the matches though. They can be split into 3 categories, which were their ECW run, the matches against The Hardy Boys and Edge & Christian and finally everything else.

The ECW matches don't stand the test of time, among the matches include a wild brawl against The Pitbulls which featured numerous unprotected chair shots to the head and absolutely no wrestling. Their match against one another from November to Remember 96 which was blown away by the greatness of Joel Gertner in the post match angle.

Their tag title loss to The Eliminators at Barely Legal is nothing more than a 5 minute squash designed to showcase the athletic moves from Saturn and Kronus. Their final night in ECW is an angle to get over Raven's return though it does show that Bubba could cut a promo without swearing every other word. Their matches at Heatwave 1998 and The One Night Only show from 2005 are both terrible.

Far more positive though are classic matches from 2000 and 2001 against The Hardy Boys and Edge & Christian. Both TLC matches feature from SummerSlam 2000 and Wrestlemania X-7 and are obvious highlights. All three teams have great chemistry and were rightly seen as a key ingredient in why many WWE fans have such fond memories of that era.

Their classic matches against Matt and Jeff from the Royal Rumble 2000, which was the double table match and the unification tag match in the cage at the Survivor Series 2001 also appear and they also stand the test of time. I've got to say it was pretty enjoyable going back and re-watching those matches.

Other matches in the set was a really fun tag match from 2001 against Kurt Angle and The Rock which was action all the way and survived the fact that it doesn't have a finish as it was a backdrop to the WWE vs. Alliance storyline that was running at the time. The match against Rob Van Dam and Rey Mysterio is a fine example of why The Dudleys were a really good heel tag team.

Their single matches show that Bubba had and still does have more of an upside. D-Von's victory over Triple H is a classic example of how someone can lose and still make sure that the winner gets no benefit from the win. That match also includes the debut of Dave Batista on the main roster. Bubba's outings against Triple H and Brock Lesnar at least have the intention of treating him as a genuine singles star.

The set is very much reliant on the great three way feud from the early 2000's and from that point this release is a success, the Angle/Rock match is also well worth seeking out but the ECW matches are generally disappointing and don't really add anything to their legacy or any quality to this boxset. Should you buy this? Well it completely depends on you felt about their first WWE run.