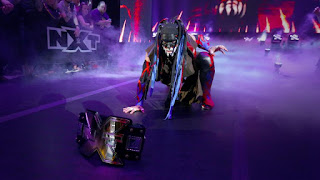 This time last year, developmental was kicking the main roster’s ass, overshadowing them on the biggest weekend of the year. Now that the show is actually in Dallas, for the Wrestlemania festivities themselves, can they make it two years in a row, in an even more significant way, with all eyes on them?
NXT Takeover: Dallas is about half the length of Wrestlemania 32 (a five-hour whopper of a show that will surely feel about as long as it is), or roughly the same amount of time usually spent faffing about on RAW. With less time and fewer stars, can NXT steal the spotlight yet again, or will it crumble under the pressure?
The first thing to note about this event is how different it feels to its main roster equivalent. Take, for example, a Fastlane. The hype leading up to same is nowhere near as well-built, or well-considered as that going into Takeover: Dallas. Hell, even the vignettes that open the show, meant to further sell us on what we’ve already committed to watching, are fantastic. There’s a real sense that what happens tonight is about to change everything, as opposed to just kill time before moving on to the next event.

We kick things off with a rousing tag team championship bout, pitching current title-holders The Revival against newcomers American Alpha. Some disrespectful slapping from both sides establishes the tone early on – this is defiantly old-school, very technical style combat, as the two teams’ names suggest. The tag side of things is very fluidly handled, well thought out and weighted with consequence.

The fight is hard fought, on both sides, each near fall completely devastating. In the end, though, it’s American Alpha who steal the win, and the titles. They’re understandably ecstatic, as are a suitably hot crowd who cannot get enough NXT by the sounds of it. Funnily enough, this stormer of an opener actually sets the tone for the rest of the show. The matches tonight are mostly fast-paced, energetic, and suitably rough bouts (aside from an incredibly tense main event showdown).

Continuing in that vein are Baron Corbin and Austin Aries, the former taking it to the new recruit in order to make his in-ring debut particularly memorable. The fans are not happy when Corbin is in control, pulling for indy hotshot Aries throughout and getting particularly rowdy when he turns it around on The Lone Wolf. Corbin is in an interesting performer in his own right; he looks a bit like Roman Reigns’ dirty, ex-con cousin, but he wrestles much better than his appearance would suggest. 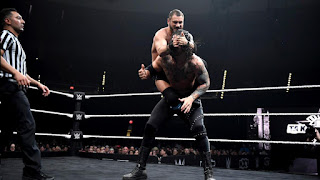 Naturally, though, he severely underestimates Aries as an opponent, his attempt at the End Of Days turned on him as he is rolled up and covered, Aries thereby turning his first match into his first victory on NXT. Someone with whom the letters ‘NXT’ have become synonymous is returning favourite Sami Zayn, whose time on the main roster was cut sadly short thanks to an injury, but who has now come back to his old stomping ground to give Japanese superstar Shinsuke Nakamura a proper welcome.


Takeover: Dallas is an incredibly strong show across the board, but the Zayn/Nakamura match is arguably the strongest of the night. It’s difficult to pinpoint just one element that makes it so fantastic, but it’s one of those matches that, watching it, you just know is going to live on in your memory forever. Starting with a thrilling vignette, seemingly scored by Hans Zimmer himself, the atmosphere is heavy with intrigue from the beginning.

Duelling chants echo around the arena, the fans split between getting behind their favourite, Zayn, and marking out over one of, if not, the most famous wrestler in Japan. As it turns out, it’s easy to root for both of these guys to emerge victorious here. It’s hard to imagine anyone more enthusiastic or warm as a performer than Sami Zayn, but Nakamura has almost an overflow of personality. He starts the match by just standing there, staring at his opponent and making weird faces.

When the two finally do lock up, it’s as though a bomb has just gone off. The pace is fast, energetic, loaded with ‘blink and you’ll miss it’ moments – basically, the ideal temperature for these two particular men. This is arguably the roughest Zayn has ever been in the ring, as he rises to the challenge of matching Nakamura’s strength tactics, the two exchanging devastating forearm strikes until the Japanese man is left bloodied and noticeably perturbed.

Neither can seem to quite best the other, Nakamura’s usually devastating knees doing little to slow Zayn down, while the Canadian struggles to hit virtually any of his signature moves. A “Fight forever” chant erupts about two-thirds of the way through that, given the quality and the amount of skill on show here, feels entirely justified. Zayn goes for the DDT through the turnbuckle, only for Nakamura to kick him in the head and, suddenly, it seems the fight may be lost.

As it dawns on the NXT fan favourite that this is no ordinary opponent, Nakamura hits the Boma Ye and wins it, the fans erupting almost instantaneously into chants of “Olè!” and “Thank you, Sami!”. It’s a disappointing ending for Zayn, but he may be gearing up for a major Wrestlemania moment tomorrow night, this match having been a warm-up for him, a way to ingratiate Nakamura in with the NXT fans as their #1 takes a step back and onto the main roster. 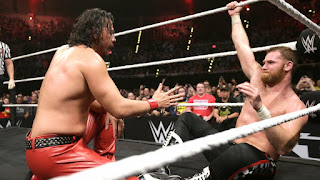 Speaking of which, if there’s one thing Vince can’t seem (or doesn’t want to) get right it’s the women’s division. Not such a problem for Triple H, who has created a female roster in developmental worth tuning in for (and none of ‘em feature on Total Divas). Tonight’s title match sees current champ, and another major fan favourite, Bayley take on another Japanese newcomer in the form of the seemingly unstoppable Asuka.
Six months in to her NXT tenure, Asuka is undefeated and, according to some interesting vignettes prior to the match, everyone is kind of terrified of her. But Bayley has worked hard for the championship and she won’t give it up easily, as evidenced by this hugely entertaining, and very colourful (both literally and figuratively – it’s like watching two angry rainbows fighting at times) bout.

Asuka certainly lives up to her reputation, but right off the bat Bayley is ready for her. The women’s champ may be cute and sweet but she’s certainly not a pushover, laying into the newcomer at every opportunity. A particularly shocking, standout moment, sees her locking in Asuka’s own submission hold on her, to which Asuka responds with a bone-crunching armbar. Somehow, Bayley manages to fight back valiantly.

She even withstands a devastating Suplex into a second armbar just moments later, but the champ can’t quite power out of the Asuka-Lock and she passes out in the Japanese woman’s arms, making the newcomer the new champion, and the second Japanese victor of the night. What should be an upsetting moment is given such strength and levity by the crowd reaction, their enthusiasm for the women’s match, and the commitment of those involved.

NXT isn’t done with Dallas yet, though, as we’ve still got the Main Event to go. The build-up for this match, which sees Finn Bálor defend his championship title against Samoa Joe for a second time, following Takeover: London, has been nothing short of incredible. The atmosphere is thick with anticipation as Bálor emerges, waving a chainsaw around and gurning for the cameras (much to Joe’s annoyance).

He chucks the champ over the barricade right off the bat, his face bloodied from the outset, which stalls the match as medical staff rush to mop him up (again, much to the big guy’s annoyance). The commentators consistently compare Joe to Godzilla and, even though he probably has a few pounds on that kaiju monstrosity, it’s a fitting comparison given how he seeks to completely dismantle Balor. This is the slowest match of the night, but it’s because it’s the culmination of a lengthy feud, one in which the correct time and attention has been taken to really sell it to us as fans.

This doesn’t feel like just any night, just any match, it feels like the night, the match. Joe is intent on snatching the title, pummelling the living daylights out of Bálor, but the Irishman is unstoppable in his own way, powering out of a gruelling cross-face to land a double footstomp. Joe responds in kind with a musclebuster, and he very nearly wins with it too but Bálor isn’t willing to give in and he, to Joe’s shock and disbelief, manages to come out swinging once again.

Although his tough exterior barely wavers, as the fight drags on and Bálor refuses to cop to him, Joe begins to look slightly nervous – particularly when the Irishman growls at him from the other side of the ring. A stunning Coup De Grace is followed up with a Coquina Clutch but Bálor powers out yet again, subsequently managing to roll Joe up to finally get the pin and win. It’s a stunning, shocking, game-changing ending to the night that closes Takeover: Dallas off in a remarkable way. Wrestlemania 32 - beat that for a finish.

All joking aside, there really is something tangibly different about NXT. The whole atmosphere is different, from the super-hot, endlessly engaged fans to the urgent commentary, to, of course, the quality of the storytelling, the matches and the booking. Where RAW, or even certain PPVs, can feel bloated and saggy, not a moment of NXT air-time is wasted. Everything feels relevant. It’s remarkably tight as a show in general, there’s not an ounce of flab.

And NXT Takeover: Dallas continued that fine tradition. There were no piss break matches, not a dud in the bunch, not even a hint of a yawn. Every single second was strong. In all seriousness, Wrestlemania really does have a hell of a lot to live up to on Sunday night. ­